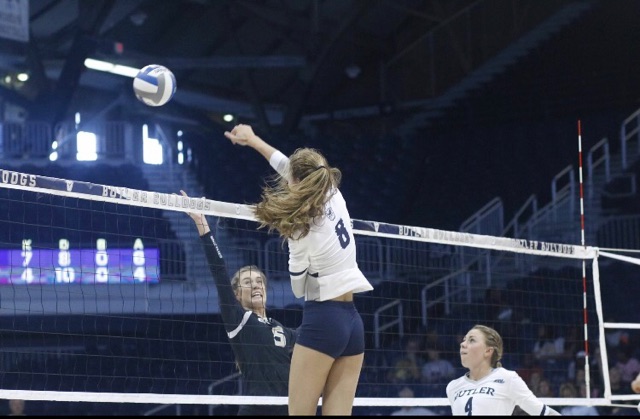 Freshman middle blocker Rachael Klitzing rises up to spike the ball out of an opponent’s reach. Collegian file photo.

The first match ended in a sweep. Junior outside hitter Anna Logan returned to Hinkle Fieldhouse and led all players with 17 kills on 31 swings. Butler defeated Duquesne 25-18, 25-16, 25-16.

“Our energy and spirits were always high,” Logan said. “We hustled after every single ball for every point. We had great defense, blocked well and Makayla [Ferguson] spread the ball very well.

Butler cruised to a 2-0 lead against in-state rival Ball State.

After the Cardinals took the next two sets, the Bulldogs surged ahead in the fifth in the final set. Junior defensive specialist Rachel Schultz posted a team-high 22 digs, while Ferguson, a senior setter, added a team-high 48 assists.

“It was definitely a tough day playing two really good teams,” Ferguson said. “I think that was a really good test for us. I think that we stuck together as a team, fixed mistakes and made really important plays when we needed to.”

Butler moves to 10-2 on the season. Head coach Sharon Clark said she was happy with the way her team performed in the doubleheader.

“We’ve been kind of under it all the time,” Clark said. “We’ve found a way to fight our way back. It was good to see us do that.”