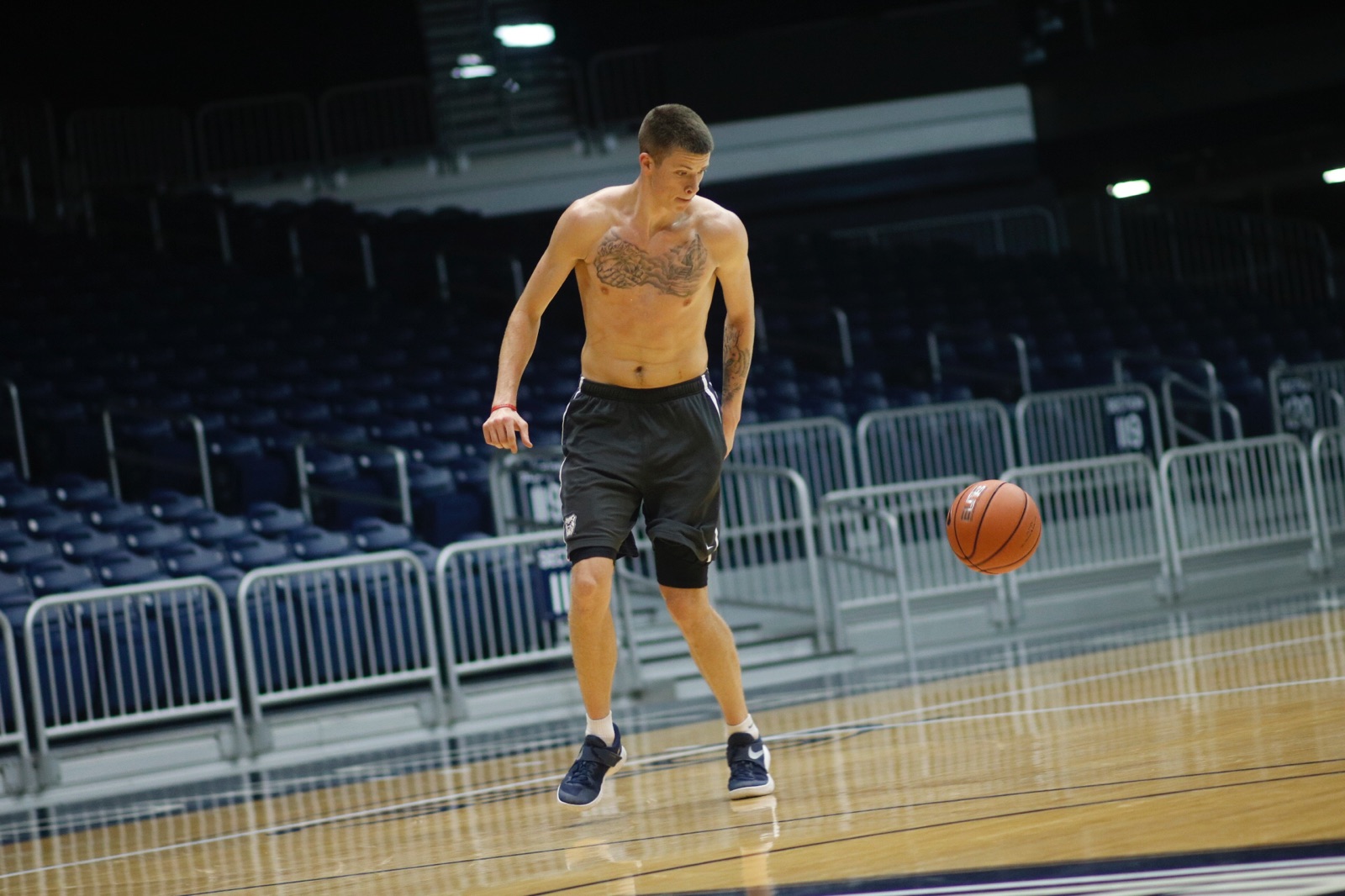 Butler men’s basketball players’ tattoos depict tigers, jaguars, and scriptures. Each work of art has its own story, tales which are packed with meaning.

Some members of the Butler University men’s basketball team have decided to use such tattoos to express themselves.

Freshman guard Cooper Neese has three tattoos on his arms and chest. Neese has his initials in Old English lettering on his triceps, while his chest tattoo shows the Bible passage John 3:16.

Neese said he believes some people make assumptions about people with tattoos.

“People automatically assume someone is a bad person when they see ink on someone’s skin,” Neese said. “I’ve met some of the most down-to-earth people who have tattoos and piercings all over their bodies. I think people need a little bit more of an open mind with tattoos.”

Senior forward Tyler Wideman leads the team with nine tattoos. Wideman got his first tattoo as a birthday gift during his sophomore year of high school, but the thought lingered in his mind well before 2012.

“I have wanted tattoos since I was 6 or 7 years old,” Wideman said. “When I used to play NBA 2K, I would create players and give them full tattoo sleeves. People in my family had tattoos, and I always thought they were cool.”

The player known as “Big Cat” describes one tattoo as a fan favorite: his tiger tattoo he got before last season. The tattoo stretches from his right elbow to his wrist.

“People usually like that tattoo because it’s a tiger and that’s my nickname,” Wideman said. “People like that one a lot.”

“I got a tiger tattoo that says ‘Kim Strong’ above it,” McDermott said. “I got this one for my mom as a reminder to keep moving forward. She went through so much and was so strong through it all.”

McDermott thought he would never get tattoos before starting college, but said he became open to the idea once he arrived on campus. He got two tattoos on his chest during his freshman year.

The guard/forward said the ‘Kim Strong’ tattoo carries great meaning for him and his family.

“There is nothing that I will ever do that will compare to what my mom did,” McDermott said. “It is also a reminder of all the people that I have in my life that have my back in tough times. My girlfriend, dad, brother, aunts, uncles and cousins were all there for me, so it’s dedicated to the strength of my entire family, too.”

His other tattoo shows a pair of hands holding a basketball with the words “In God’s Hands” above it. McDermott continued the theme with stair steps through the clouds leading to the gates of heaven.

Family ties also impacted the tattoos of sophomore center Joey Brunk. Brunk’s father, Joe, passed away on April 15 of this year due to brain cancer. Brunk said he wanted to have a constant reminder of the man who always supported him.

Today my Dad took his last breath on Earth & his first in Heaven. My heart is full of our memories. So proud of his fight! I love you dad!

“My dad always told me to embrace my journey,” Brunk said. “That is why I have my tattoo on my arm with those words dedicated to him. I never really was a tattoo guy, but after everything that happened, it became something for me to think about.”

Brunk has two other tattoos which remind him of his relationships with his mother, Helen, and younger brother, Johnny. His owl tattoo on his inner left forearm represents his mother, while his half-jaguar/half-panther chest tattoo is an ode to his brother. Brunk said he will always have his family members alongside him in life.

“They are constant reminders that they are always with me,” Brunk said. “I’m very comfortable with my skin and my path.”

The needle that threads several players together is tattoo artist Brandee Gordon. Gordon owns Native Ink Tattoo in Elwood, Indiana, and has tattooed past and present Bulldogs.

“I used to tattoo Avery Jukes and Shawn Vanzant,” Gordon said. “Watching these guys grow through the years makes me feel good. The tattoos have a lot of meaning behind them, and I feel like a big sister to these guys.”

Gordon, who has nearly 13 thousand Instagram followers, has worked as a tattoo artist for 20 years. She tattooed Wideman, McDermott and Brunk.

“The guys usually come in with ideas,” Gordon said. “It is a really small world. Word of mouth is amazing.”

The word has spread quickly. When Wideman arrived on campus, he itched to add to his collection. He looked to an on-court rival and off-court friend for recommendations.

“I met Brandee through Trevon Bluiett from Xavier,” Wideman said. “Now, when someone wants to get a tattoo, they ask me about it.”

Brunk, who played his freshman year of high school at Park Tudor School in Indianapolis, said he learned about Gordon through his Butler teammates.

“Trevon was my teammate in high school, so that’s crazy,” Brunk said. “I think everything came full-circle there.”

McDermott said he would never get a tattoo that had no meaning behind it.

“I like the way they look,” McDermott said. “I think it’s a really cool way to express yourself. I know there are a lot of people who think there are other ways to do it, but I think tattoos can do it too.”