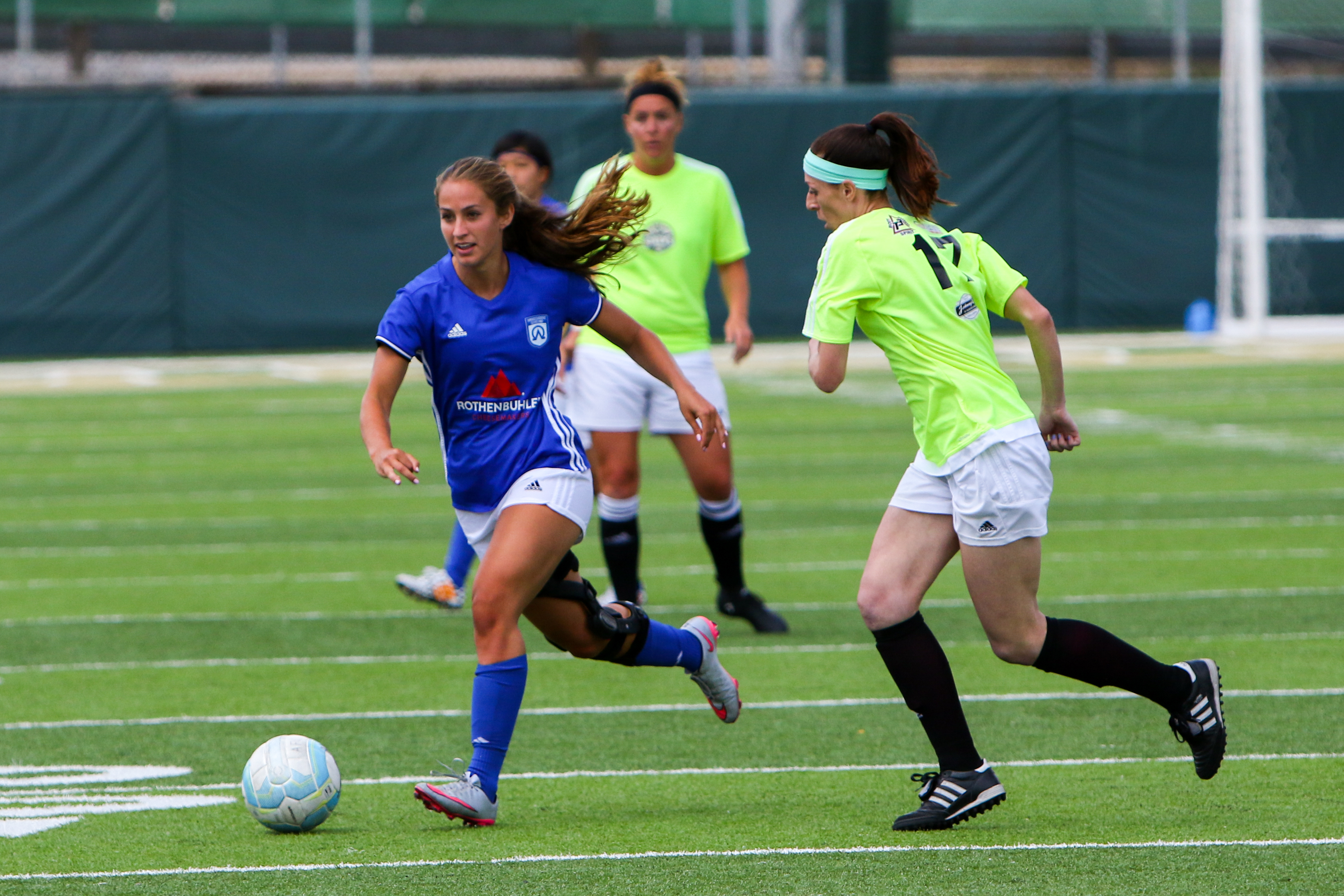 Following the end of the spring workouts in women’s soccer, the team takes a break. Coaches meet with their players and give them things to work on over the summer. Some athletes might hang up the boots and relax for a few months. Others might work on their own, stay in shape and work with individual coaches.

Junior Halle Stelbasky and senior Maria Collica did neither of these things.

“A lot of times, girls fall off during the summer and lose focus,” Collica said.

Instead, they went home. Some may call it the “mistake by the lake.” Locals call it “the land.” But Stelbasky and Collica did not just stay and live in Cleveland. They played for the Cleveland Ambassadors.

The Cleveland Ambassadors is a women’s amateur soccer club that plays in the Women’s Premier Soccer League. The confederation is on the second tier of the leagues in the United States, one step below the professional National Women’s Soccer League. This past summer was the Ambassadors’ second season in the WPSL- after existing as a youth organization since 2003. Stelbasky and Collica have played both years.

The season begins in mid-May and ends in July. The Ambassadors are part of the Great Lakes Conference- which is made up of five total teams. There are more than 100 teams in the WPSL located across the country.

Stelbasky considers the summer league less stressful than the college season. The team practices three times a week and has two games a week.

Stelbasky said some of the pressure is taken off by Ambassadors Head coach Caleb Fortune.

“During the season, I think it’s important the players enjoy their summer because it is a combination of off-season and pre-season,” Fortune said.

Stelbasky scored 15 goals in their 11 games. She scored at least one goal against each opponent faced throughout the season. Collica played two games for the team this past year before tearing her ACL. She was then out the rest of the season.

Here are @HalleStelbasky‘s 15 goals in 11 games ⚽️? 11 of them away on long journeys & mixed weather ?✅ Humble girl & an amazing striker! pic.twitter.com/scfGxIzxJS

Both players said part of the fun is reuniting with fellow high school teammates or opponents from the past. A majority of the team is made up of athletes from the northeast Ohio area, and most attend different NCAA Division I universities. Stelbasky has five fellow Walsh Jesuit alumni on the team. Collica can remember playing against her Ambassador teammates in high school.

“It’s really exciting to play with them,” Collica said. “I love competing, so when we do play against them, it’s a battle. And we both know that after the game, we’ll probably still going to be teammates next year.”

Not all of the girls on the Cleveland Ambassadors are originally from Ohio. Recent Butler women’s soccer graduate Serina Kashimoto played the past two seasons with Stelbasky and Collica in Cleveland. Following Kashimoto’s success in the WPSL this summer, she signed a contract with MSV Duisburg in the Frauen-Bundesliga in Germany in July.

Though the team is competitive with one another on the field, Collica and Stelbasky had a blast with the team otherwise, especially on road trips to other cities.

“We would get on the bus, we’d probably watch a movie, say High School Musical,” Collica said. “Sometimes, we’d put headphones on, like the big Beats one’s, and then someone would pick a song and then you’d have to sing the words. I don’t know, it was really funny.”

While the players enjoy interacting with one another on the road trips, the team plays a leadership role in the community. The team is the only higher level women’s soccer team in the area, which gives young soccer players a chance to interact with the next level talent. The team hosts several summer camps with younger girls in the area, as well as the youth teams in the Ambassadors club organization.

“I worked an all-girls camp, and I think it’s just a great way to give back to the community for their support,” Stelbasky said. “I love the relationship we have with the younger players.”

Collica appreciates all of the support that the area gives to the team.

“It’s a great feeling working with them at camp,” Collica said. “I talk to the kids all the time and all they want is to be a college soccer player or to play for the WPSL team.”

Great to see the players interacting with the fans after yesterday’s game. Thanks to everyone who came out to support the team! pic.twitter.com/eLZoWczdvE

Stelbasky sees the Ambassadors as a chance to expand women’s soccer in Cleveland.

“The WPSL is really neat,” Stelbasky said. “Cleveland has never had that before. When I was little, I could never go a girls soccer game that I looked up to, except for a high school game, but that’s really only in the fall.”

Being from England, Coach Fortune was unsure on how popular the team would be in the United States. This past season, the Ambassadors doubled their attendance from 2016, and Fortune has gotten increased interest and feedback from the community.

“Most of the time when players are local heroes in high school, they go to college and no one ever sees them again,” Fortune said. “Bringing them back is wonderful for the youth to see them at their peak.”

Collegiate women’s soccer is just underway this fall. Following the season, both Stelbasky and Collica plan on reuniting with their former teammates for one last season with the Ambassadors next summer.