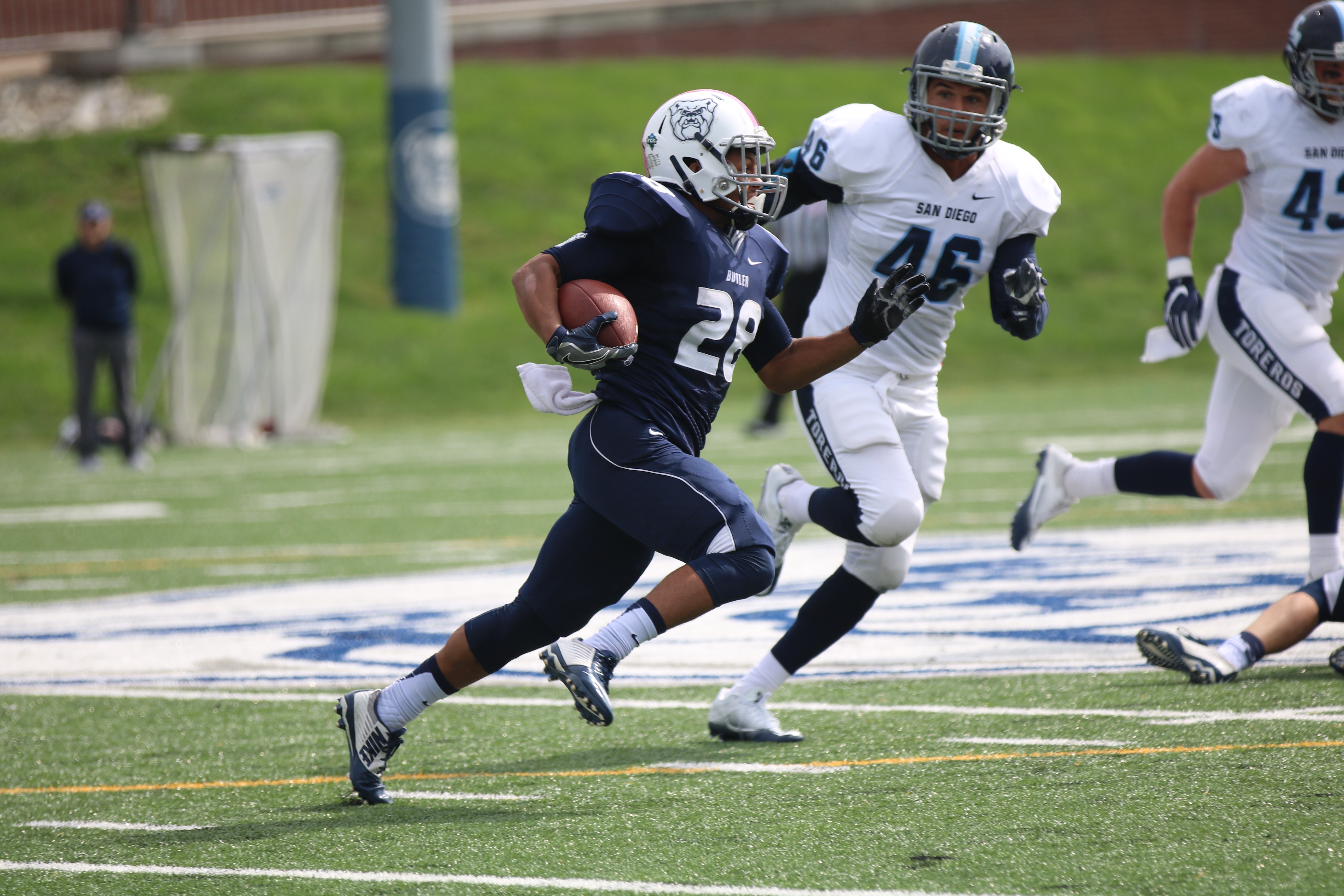 The Butler football team has only one direction to go this season: Up. The Bulldogs ended a disappointing 2016 season at 4-7 overall and 2-6 in Pioneer Football League play. They lost three of their last four games.

Now in his twelfth season as head coach, Jeff Voris will begin his quest to capture Butler’s first outright PFL title since 2009.

The Bulldogs have a strong core of returning starters including junior wide receiver Pace Temple and redshirt senior running back DuVante Lane. The duo was named to the preseason All-PFL team based on their efforts last season. Both ranked in the top ten in yards for their respective position groups in the PFL and were named All-PFL second team in 2016.

The biggest loss for the Dawgs will be quarterback Malcolm Weaver, who started in eight of 12 games a year ago. Replacing Weaver will be redshirt junior quarterback Will Marty, who earned the starting job over redshirt sophomores Cameron Towns and Alex Lozon. Marty played in seven games last year, passing for four touchdowns and 664 yards.

The Bulldog offense will shift from an option-based scheme, an offense that involves fake handoffs and pitch plays, to a pro-style scheme which relies on handoffs and passes. Marty, traditionally a pocket passer, said he will embrace the changes to the offense.

“This season we will be playing more towards our strengths,” Marty said. “That is using our running backs like Duvante [Lane] and receivers like Pace [Temple] who are able to make plays. My job is to run more of a pro-style offense and get those guys the ball as much as I can.”

Offensive improvements will be key for Butler after last year’s team ranked just eighth out of 11 PFL teams in total scoring. The Bulldogs were outscored by their opponents 270-318 a year ago, a point Temple said should be corrected this season.

“Last year, we had a lot of slow starts,” Marty said. “Whether that be not playing well until the second quarter or second half, we have to start faster. We have to go out and have an attitude, and a mindset that we’re going to go out and hit the other team first to set the tone for the game.”

Stepping up to replace these players will be linebacker Mason Brunner and defensive back Luke Sennett, both newcomers to the starting lineup. The defense was the focal point of Butler’s success in 2016. The Bulldogs ranked fifth in total defense and first in rush defense in the PFL last season.

Sennett said offseason preparation is key for the new members as they enter their first real game action.

“Spring ball is so important for the younger guys including myself,” Sennett said. “We really haven’t seen a lot of time on the playing field and most of these guys haven’t played since high school. Having spring games and scrimmages help those younger guys get real game experience and get up to game speed come kickoff.”

“In the past our energy has ebbed and flowed,” Newhouse said. “We’ve made a conscious effort to keep it at a high level. We’ve also incorporated both a verbalized and unsaid accountability and ownership system. The defensive unit is taking pride in both the ups and downs of performance and success.”

In 2016, the Dawgs were a measly 1-4 at home, a shocking turnaround from the 5-0 record earned in the previous season.

Butler faces only three different opponents from a year ago. The Bulldogs will travel to Normal, Illinois, to take on the Illinois State University Cardinals this Saturday to begin the season.

Butler will round out its nonconference schedule with clashes against Franklin College on Sept. 9 and Taylor University on Sept. 16 for their home opener.

Other notable games include a rematch of the 2015 homecoming game against Campbell University on Oct. 21, and an in-state rivalry showdown with Valparaiso University at the Sellick Bowl on Nov. 11.