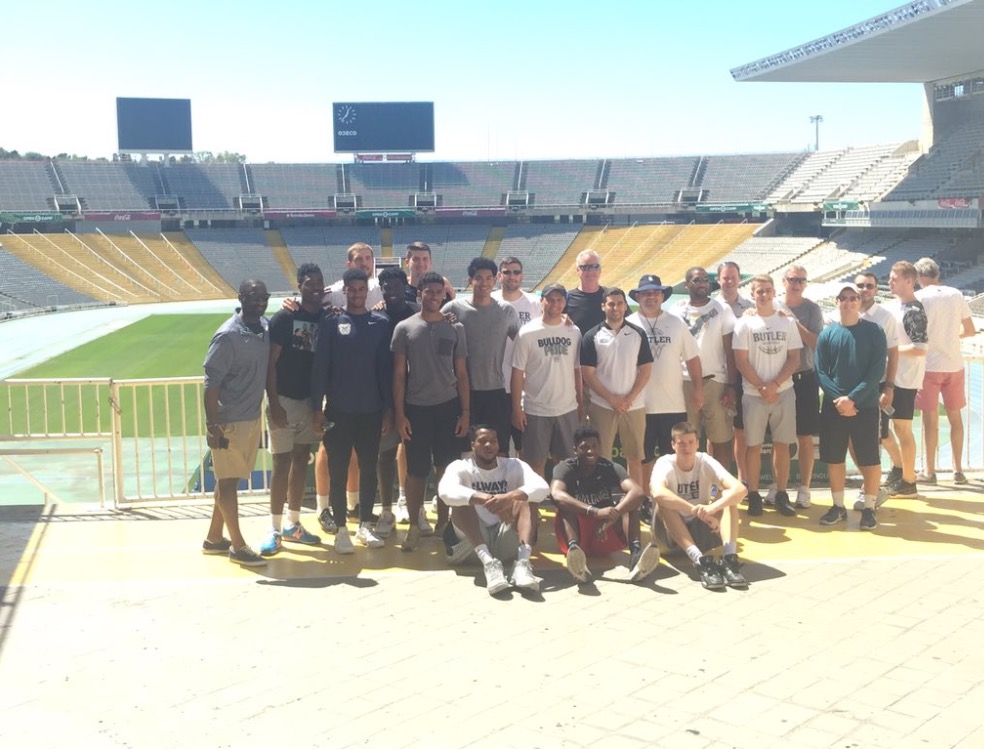 The team stops for a photo in front of the Olympic stadium in Barcelona, Spain. Photo courtesy of Butler men’s basketball Twitter account.

“He was walking the beach and somehow hadn’t attracted any attention, so we were a little hesitant to stop him and ask for a picture,” Furman said. “When Sean finally asked him, he actually noticed our Butler shirts and said, ‘What are you guys doing here?’ It was pretty cool to see a guy that has been a force in the league for decades recognize the program that you are a part of.”

Never know who u may run into while in Valencia. Manu Ginobli stopped to say #GoDawgs at the marina last night! #GoSpursGo #DawgsInSpain pic.twitter.com/NzZRbB3gv6

Meeting an elite NBA player was just one of many highlights of the Bulldogs’ venture abroad. Butler went 4-0 on the trip, defeating various European professional teams in exhibition games.

NCAA rules permit foreign trips every four years. The Bulldogs most recently traveled to Australia in 2013 and Italy in 2009. Head coach LaVall Jordan, a 2001 Butler graduate, played during Butler’s 2000 trip to Finland.

The team traveled to Madrid, Albacete, Toledo, Valencia and Barcelona. Senior Kelan Martin said the team had a special bond both on and off the floor in Spain. The NCAA allows teams embarking on foreign trips 10 additional practices in the summer to prepare.

“One of the reasons we were so connected was having 10 practices when everyone was on campus,” Martin said. “That helped us out a lot because we read and understood each other’s games, and we took advantage of that opportunity quickly. Once the season hits, it is game on from there.”

The players had never ventured to Spain prior to the trip. Martin, who celebrated his 22nd birthday in Madrid, made note of another enjoyable aspect of the 10-day tour.

We capped off the team’s welcome dinner this evening with some singing and dessert. Happy birthday, Kelan. pic.twitter.com/ljLzqA3WNP

“When we were on the beach in Barcelona, I kept trying to speak to women in Spanish,” Martin said. “It worked half the time, so that’s a memory for me.”

A week before the Bulldogs packed their bags for Spain, associate athletic director John Dedman gave sophomore Joey Brunk the opportunity to write a series of blog posts for the IndyStar. An Indianapolis native, Brunk jumped on the chance to document the trip for the newspaper.

“When Mr. Dedman came to me, I said ‘I’m your man,’” Brunk said. “I was really excited to write and thought it was a really neat opportunity. I made sure to call my mom every day and talk about it.”

The forward/center penned six entries in the “‘Dawg Diary.” He touched on topics near and dear to his heart: the Spanish cuisine, John Mayer and zoos.

“When we had some free time, I had to jump on the chance to go to the Madrid Zoo,” Brunk said. “I saw a giant anteater and big sea turtles out there, which was pretty cool.”

In Spain, makeshift locker room, over pizza…still nothing better than the War Song after a Dawgs win. pic.twitter.com/OVUBfT2ybr

While the Bulldogs enjoyed the pleasure, they also thought of the overseas excursion as a business trip. Freshman Cooper Neese, who recovered from a broken thumb, said he felt comfortable playing with his new teammates in the latter games.

“Everyone is feeding off each other,” Neese said. “Everybody is there for you, no matter what.”

Jordan has served as head coach for just over two months. This season will be his first at the helm. Although the future remains unclear, Neese said he is confident in the squad’s abilities and cannot wait to put on a Butler uniform.

“We end up doing the same thing every year,” Neese said. “We end up proving them wrong. And we get to say, ‘Y’all were wrong.’”

The Bulldogs will begin exhibition play on October 28 against Hanover College at Hinkle Fieldhouse.