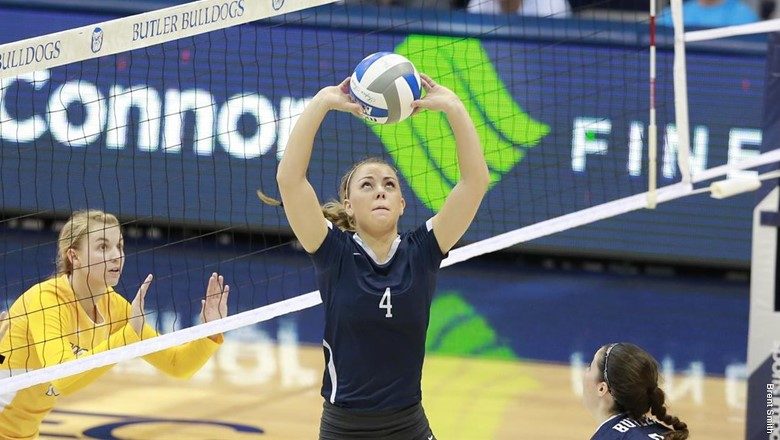 Junior Makayla Ferguson sets the ball for a spike. Photo via Butlersports.com.

The Bulldogs won 25-16, 25-11, 25-19. Klingensmith, who contributed three kills and four blocks, said she felt very emotional after her final win.

“It’s a surreal feeling,” she said. “I now know I will never play on Hinkle’s court or at the collegiate level again. That is crazy to think about.”

Junior setter Makayla Ferguson set the pace with a team-high 28 assists. Ferguson said she will look back on the 20-win season with fond memories.

“I will definitely remember how great of a group this was,” she said. “This season was so great for us because we fought as hard as we could every day.”

Sophomore outside hitter Anna Logan, who posted 15 kills against the Big East foe, said the Bulldogs fought as a team.

“We came together really well today,” she said. “We played for each other and we played for Jess.”

Head coach Sharon Clark said she was happy with the season’s ending.

“It was great to see Jess get that last point,” she said. “I feel great because our season ended on a high note.”

The Bulldogs finished their season 20-14 (9-9 Big East.) The first round of the 2016 Big East tournament will begin at Hinkle Fieldhouse on Friday. Butler was eliminated from postseason contention.