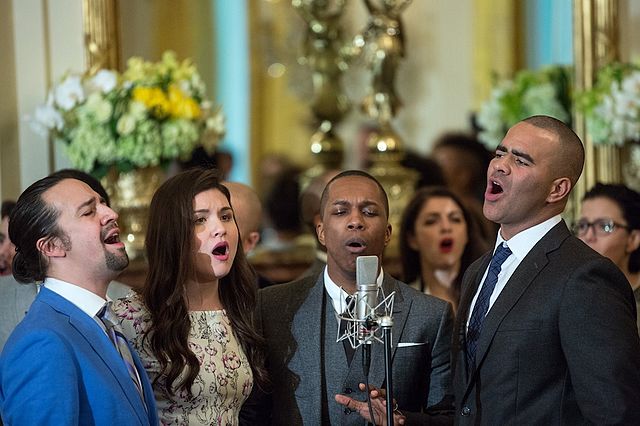 And I got to be in the room where it happened.

The actor, who had roles in “Grey’s Anatomy,” “Smash” and “CSI: Miami,” gave a lecture that hit home with the college students in attendance. He also sang and did a Q & A session with the audience.

Titled “Finding Your Personal Spotlight,” Odom’s speech chronicled his journey through show-biz, offering advice and personal anecdotes on everything from his first Broadway audition to how “Hamilton” is changing the world of musical theatre.

“There was a light in the center of the room that I could feel – it was just like, right there,” Odom said.  “Like, what if I just stepped in it and was fully myself and didn’t apologize and was bold and fearless in that light?”

Standing fully in the light is something that I think a lot of college students do not understand.  It is one thing to be qualified and good in your field of work.  It is another thing to completely, unabashedly put yourself in everything you do.

That is a very scary concept for young adults who are still trying to understand exactly who they are and what their light means.  When we are constantly surrounded by the best and brightest in our field, it can be hard to count ourselves among them.  We constantly throw away our shot simply because we are unsure.

“My light is not dimmed by the brightness of someone else,” Odom said.

When he said that, I had to sit there for a second and take it in.  What did I miss?  Was that not the opposite of everything I had ever been taught in school?

I was supposed to have the best grades, snag the best internships, participate in the most extra-curricular activities and maybe that would be enough. If someone else was better than me, that was a flaw on my part, not something that I should praise them for.

But Odom repeated that one sentiment multiple times throughout his lecture, talking about how he learned to worry about himself when it came to toxic comparisons with his competitors.

It is OK that other people are successful.  It does not mean that I am not successful as well.  I sometimes get just as excited watching my friends and family be good at what they love that it inspires me to do my best as well.

“There’s gonna come a moment once you find your path where you do just have to have that courage to get in the center of that thing and stand in it and be all that you can be,” Odom said.

In college, there are always going to be people or situations that test your limits.

I struggled to balance work, school and sports.

In the end, I could have avoided a lot of problems if I stopped trying to box myself into what I thought I was supposed to be.

I changed my major last year.  Making a decision that so greatly impacted my academic life was scary, but doing it right before my junior year with no promise of graduating on time was even scarier.

So, what comes next?

Once I officially made the switch, it felt like a weight had been lifted off of my shoulders. I spent two years feeling helpless and trying to force myself to like a major that I obviously was not enjoying instead of finding my own personal spotlight and acknowledging my strengths and passions.

Finding your own spotlight can seem like an impossible task, especially when you might not have any idea what you want to do with your life.  After listening to Odom, I have decided not to let that hold me back.

As long as I start with being completely and utterly myself, the pieces will fall into place and I will be satisfied.

So, do not sit around and wait for it.  Take your life into your own hands because, honestly, no one knows your spotlight better than you.