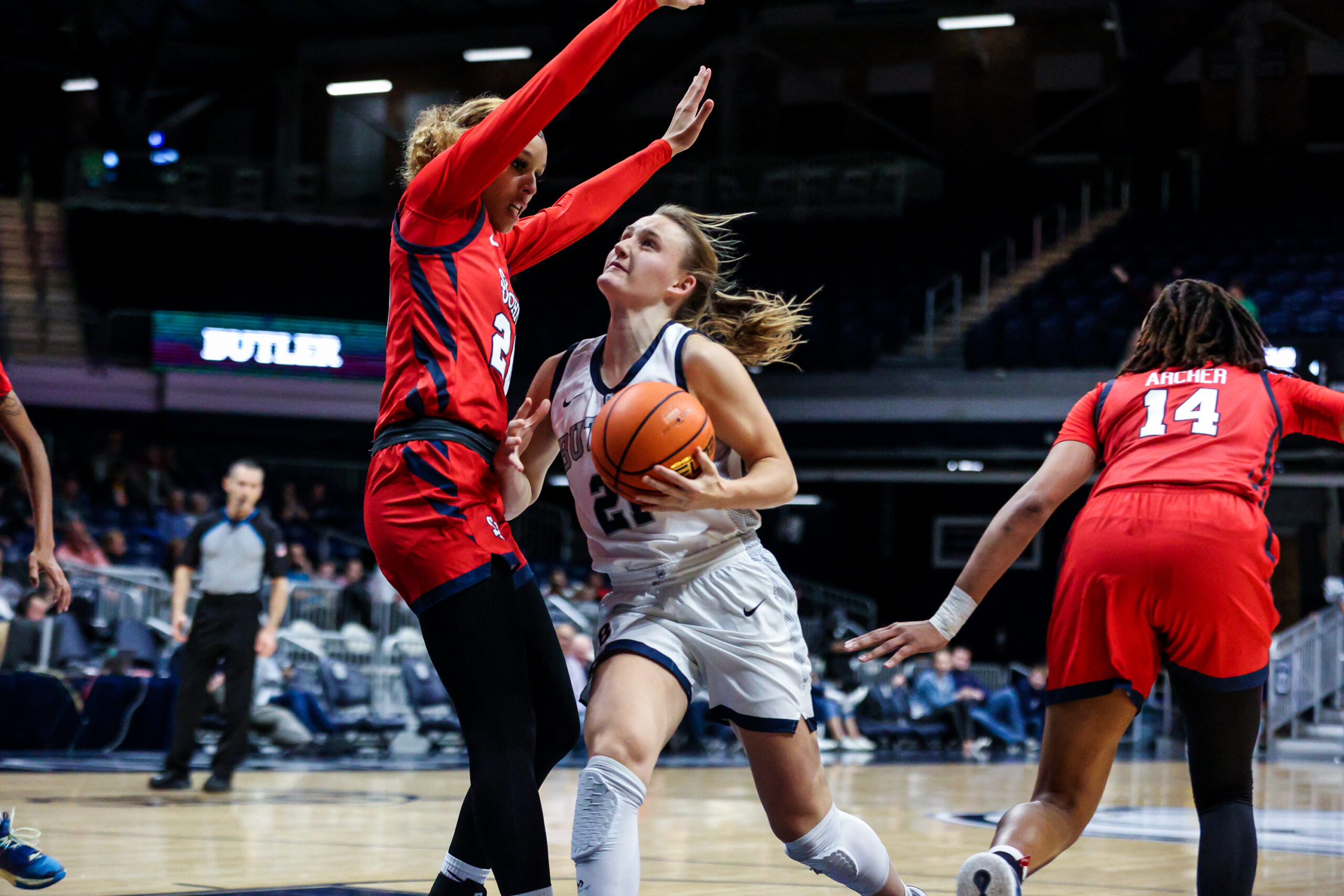 Junior Caroline Strande drives to the basket in the game against St. John’s on Dec. 2. Photo by Claire Runkel.

Providence started the game on a 9-0 run to jump out to an early lead. After a Bulldog timeout, Butler stormed back with an 8-0 run and finished the quarter down 20-12. Butler would only be outscored by one point in the second quarter and head into halftime down eight. Butler opened the second half on a 9-4 run to get back to within five, but the Friars, led by leading scorer Grace Efosa, pushed their lead to 58-47 entering the fourth quarter. Junior Caroline Strande did her best to keep Butler in the game with 18 points, but ultimately Butler fell 74-66 to Providence.

The Butler tennis team moved to 3-1 on the season on Friday with a 5-2 victory over Youngstown State. Senior Thomas Brennan, senior Alvaro Huete Vadillo and first-year Nicolas Arts all won their singles matches. With Butler taking the doubles point, the Bulldogs clinched the victory.

The women’s tennis team traveled to South Bend to take on the Fighting Irish. Notre Dame ultimately won the match by a score of 6-1. The Fighting Irish took the doubles point and won five out of the six singles matches. Junior Delaney Schurhamer picked up her first win for Butler, winning her match 6-4, 4-6 and 6-3. Butler will host Bowling Green in their next match on Jan. 28.

Women’s basketball at No. 5 Connecticut

The Bulldogs traveled to Hartford to take on the powerhouse Huskies. It was a good start for Butler as they won the first quarter by a score of 13-10. In the second quarter, the Huskies outscored Butler 26-6 and went into halftime with a 36-19 lead. Connecticut would again have a big advantage in the third quarter outscoring the Bulldogs 25-11. The game would finish with a 79-39 loss for Butler. The Bulldog’s leading scorer was first-year Jessica Carrothers with seven points and Aaliyah Edwards led the Huskies with 20 points.

Butler took a short trip to IUPUI to take on the Jaguars. IUPUI would end up winning the meet but Butler did have many good performances. First-year Sadie Brown was selected as Butler’s “Swimmer of the Meet” by head coach Maurice Stewart. Brown won the 200 fly and the 400 IM. The Bulldogs had their most success during the 200 free event. Junior Emily Landwehr, junior Jamie Gindorf and first-year Elizabeth Naylor placed in the top three spots. First-year Kate Schilling won the 200 breast event as well. The Bulldogs will host the 14th annual Butler Invitational on Sunday, Jan. 29.

Men’s basketball at No. 15 Connecticut

The Bulldogs traveled to the struggling Huskies who had lost three games in a row coming into the matchup. The final score would see Connecticut win 86-56. From the get-go it was all Huskies, who held Butler scoreless until the under-16-minute media timeout. Butler kept themselves within striking distance until a 17-3 run from the Huskies saw Butler’s deficit grow to 21. Butler entered the half down 45-23. The second half was no better for the Bulldogs as Connecticut continued their dominance on the glass and in the paint. Adama Sanogo finished with 17 points and 14 rebounds for the Huskies and Jordan Hawkins had 20 points. The Huskies out-rebounded the Bulldogs 48-22. Junior Chuck Harris led the Bulldogs with 16 points and first-year big man Connor Turnbull was a bright spot by knocking down two threes. Butler’s next game will be on the road in Providence for another tough matchup on Jan. 25.