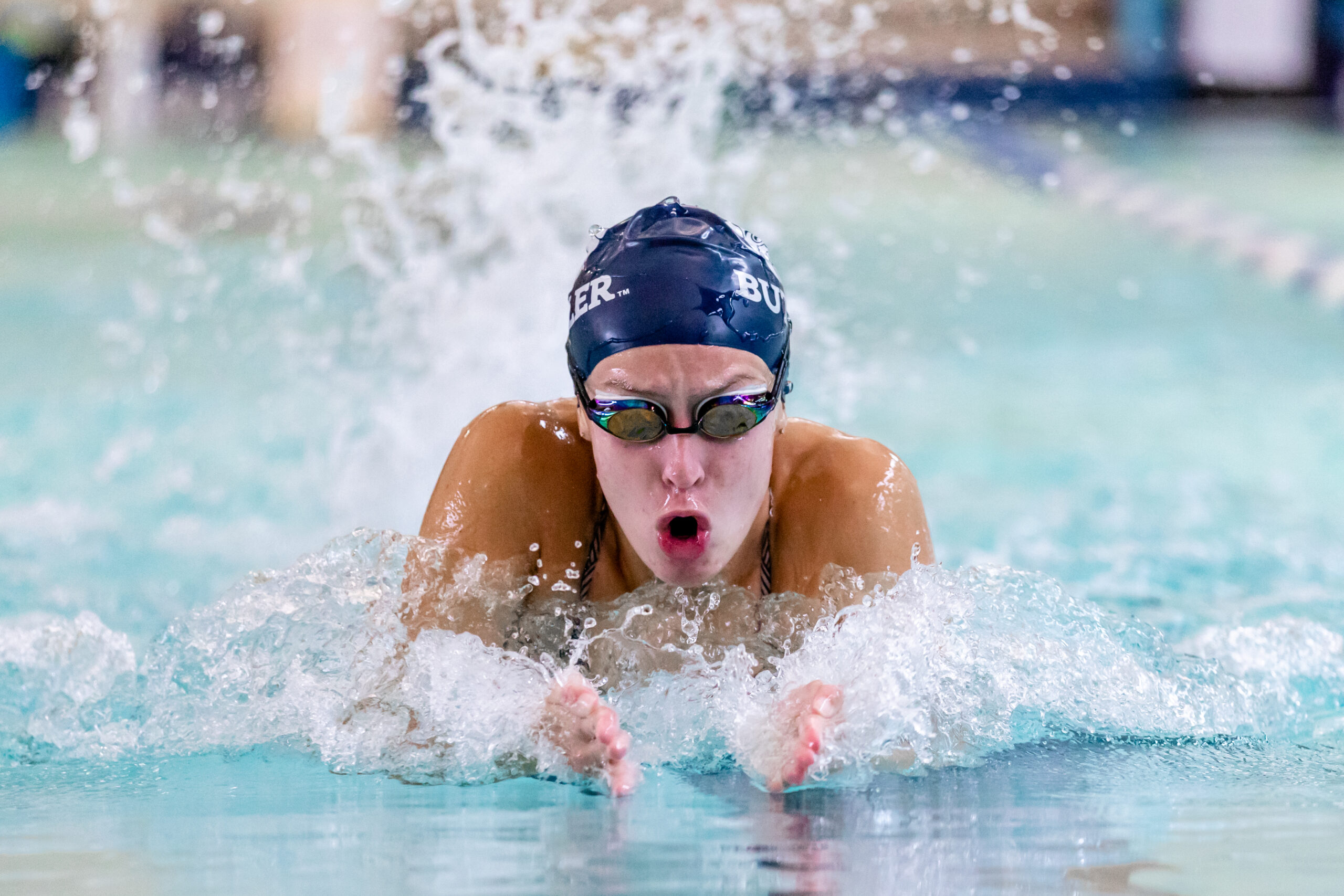 First-year Sadie Brown competes in an event during a Butler swim meet. Photo by Lauren Gdowski.

The Bulldogs will continue their time on the East Coast seeing the St. John’s Red Storm after a tough 79-39 loss against Connecticut. Butler saw St. John’s in their Big East opener, dropping the game 65-57. The team will look to even up the season meetings 1-1 before heading back home to see Marquette. Tip-off is set for 7 p.m. inside Carnesecca Arena in New York.

The men’s basketball team will see another AP Top 25 team during their East Coast road trip in No. 23 Providence. Butler enters the game coming off a loss against No.19 Connecticut and will look to enter the win column by upsetting the Friars. The two teams met earlier in the season with Providence coasting to a 72-52 win. Tip-off is set for 8:30 p.m. on FS1 and can be listened to on WXNT 1430 AM.

The women’s track and field team will head south to Bloomington, Indiana to compete in the Indiana University Relays. At the Gladstein Invitational last week, graduate student Niki Ezeh, competing unattached, placed on the podium in the 60m hurdles and long jump finishing second and third, respectively. Sophomore Ashlyn Minton also earned a place on the podium finishing third in the 3000 meters finals.

The men’s track and field team will also head to Bloomington, Indiana to compete in the Indiana University Relays. At the Gladstein Invitational last week, junior Drew Herman placed second in long jump while first-year Bennett DuBois and senior Michael Dunagan finished third and fourth, respectively, in the 800-meter final.

The team will compete in day two of the Indiana University Relays.

The team will compete in day two of the Indiana University Relays.

The men’s tennis team will continue their young season and compete in a trio meet against the Fighting Illini and the Illinois State Redbirds in Urbana-Champaign, Illinois. After defeating Youngstown State 5-2 on Jan. 20, the Bulldogs improved to 3-1 on the season. The senior duo of Thomas Brennan and Alvaro Huete Vadillo have led the Dawgs this season posting three wins together, as well as succeeding on the singles side. First-year Nicolas Arts has also shined bright for the Bulldogs in his young career.

The women’s tennis team will look to get their first win of the season against Bowling Green after starting the season 0-3. In their meet last week, junior Delaney Schurhamer scored Butler’s only point against the Fighting Irish in their 6-1 loss.

The Bulldogs will host Seton Hall at Hinkle for a rematch after a 76-51 loss on Jan. 7. Almost hitting the halfway point in Big East play, Butler has accumulated an 11-10 record and 3-7 record against conference opponents. Tip-off is scheduled for 4 p.m. inside Hinkle Fieldhouse. The game will air on FS1 and can be listened to on WXNT 1430 AM.

After matches against Illinois and Illinois State, the Bulldogs will make their way to Bloomington, Indiana to face off against Indiana. The team has had contributions from all around with the seniors leading the Dawgs.

The women’s basketball team will return home after a two-game road trip against UConn and St. John’s and tip-off against Marquette for their Pink Out game — breast cancer awareness —  in Hinkle. The Bulldogs previously saw the Golden Eagles on Dec. 18 suffering a 67-46 loss in Milwaukee, Wisconsin. The Dawgs are looking to make a push in the conference as they begin to hit the home stretch before the Big East Tournament. Tip-off is set for 2 p.m. and will be streamed on FloSports/Butler+.