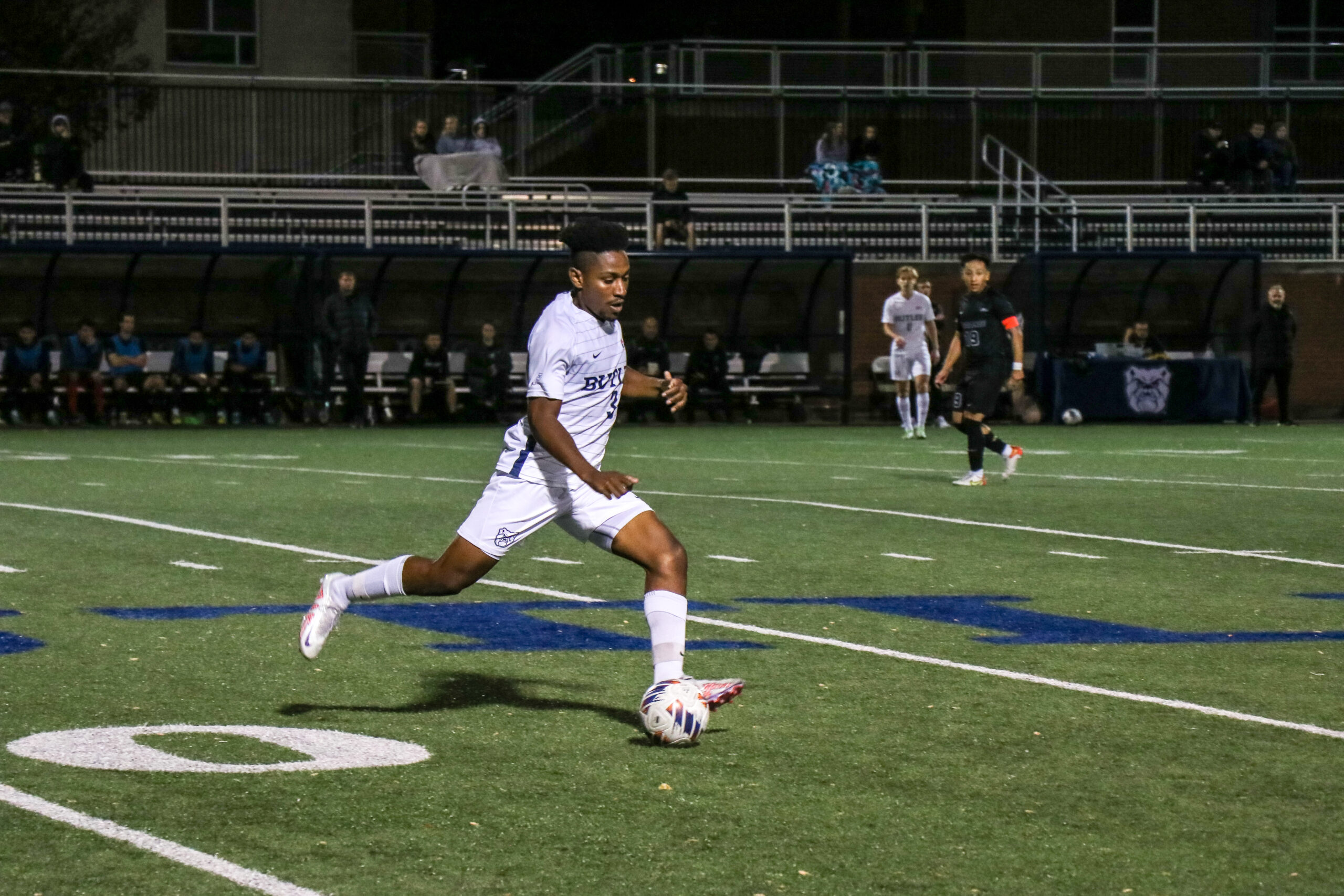 Perrin Barnes prepares to kick the ball during Butler’s win over Providence in the first round of the Big East Tournament. Photo by Grace Hensley.

Barnes helped lead the Bulldogs to a 3-0 win against Providence during their first-round game of the Big East Tournament on Nov. 5. They will travel to Boyds, Md. to take on No. 1 ranked Georgetown in the semifinals on Nov. 10.

As the team prepares to play in the semifinals of the Big East Tournament, Barnes said the key for Butler to take down the Hoyas and earn a spot in the championship game will be to work effectively as a team.

“Offensively working as a team together and defensively is huge,” Barnes said. “Even if it’s just the voices from the bench like if you make a good tackle, and everyone’s cheering, that’s huge. It’s a huge momentum shifter.”

Barnes could tell from the beginning of the season that there was something special about this team that made him believe they could be the ones hoisting the Big East Championship trophy at the end of the season.

“When you have a team you believe in, and you say from preseason, ‘we’re winning the Big East,’ and you actually go ahead and make that a reality, that’s just the best feeling,” Barnes said.

Head coach Paul Snape sees the incredible potential Barnes possesses to finish his career at Butler on a high note, as well as have the opportunity to start a successful professional career. In his 20th year of coaching soccer and 11th year at Butler, Snape commended Barnes as one of the most well-rounded players he has coached.

“As a player and student, [Perrin] is one of the most professional and dedicated I’ve seen in 20 years,” Snape said. “His professionalism, his work ethic, he’s never had a lazy day. And he just sets the tone from his concentration, his dedication and his professionalism.”

As a first-year, Barnes was one of five players to appear in all 20 matches before starting all 12 matches his sophomore season and all 18 matches his junior season. As a steady defender, Barnes helped Butler post 16 shutouts over the past three years, in addition to six shutouts so far this season.

“I’m biased, but I can tell you I’m not wrong on this one,” Snape said. “He is, without doubt, one of the top five defenders in the country.”

Barnes has held a starting role on the team each of his four years here at Butler. Now, as a senior, he feels it is equally important to serve as a role model for the younger players both on and off the field by leading by example. The ability to stay focused, determined and be team oriented throughout the duration of a 90-minute soccer game are key factors in being an elite footballer and leader.

Fellow senior teammate and goalkeeper Caleb Norris also credits Barnes for his poise and sense of reason both on and off the field that carries over into the team and their success.

“I think Perrin is a great leader on and off the field, obviously one of my best friends, and I think he just always leads by example,” Norris said. “He carries himself with class on and off the field, and it definitely carries over into every other individual on the field. I think that people see Perrin being the hardest person out there working and that’s kind of contagious.”

Barnes has always dreamed of becoming a professional soccer player. He said that dream is now becoming more of a realistic goal. As Barnes prepares to wrap up his senior season, he reflects on how his time at Butler has developed him as a player and how it has prepared him to take the next step to play at the professional level. He credits the high level of play and competition at the Division I level as one of the primary ways he has been able to elevate his game.

“I’ve learned that regardless of how things are going around you, you have to control what you can control and that’s giving your hardest,” Barnes said. “If you give your hardest, really you’ll do well anywhere as long as you have the talent.”

The road to becoming a professional athlete takes determination and hard work — neither of which Barnes lacks. The 2023 Major League Soccer SuperDraft will take place on Dec. 21. Up to 90 players are signed by clubs via the MLS draft each year, and Barnes hopes that he will be one of them.

“I would like to get drafted to an MLS team,” Barnes said. “If I don’t get drafted, it’s not the end of the world. I got a couple options … I would love to play as long as I can.”

Barnes said if he does not get drafted, he can look into playing for the United Soccer League or joining a professional league abroad. He plans to pursue his goal of playing professionally for several years but feels comfortable knowing he will have his Sports Media degree as a backup plan.

Barnes developed his interest in video editing and shooting which gave him the idea to start his own YouTube channel documenting his journey as a top collegiate soccer player.

“As much as it is to share my journey you know, inspire some other guys, it is also something to look back on almost like a scrapbook type thing for me,” Barnes said.

A few of Barnes’s videos include “Preseason day in the life of a DI college soccer player,” “Q&A with my teammates,” as well as videos covering travel days and games on the road.

Barnes’s passion for soccer is unmistakable. While there is no magic formula to becoming a great footballer, Barnes has the tangibles and intangibles that are necessary to achieve great things on the field. With Barnes leading the way, the Bulldogs will look to defeat the Hoyas and accomplish their championship hopes.