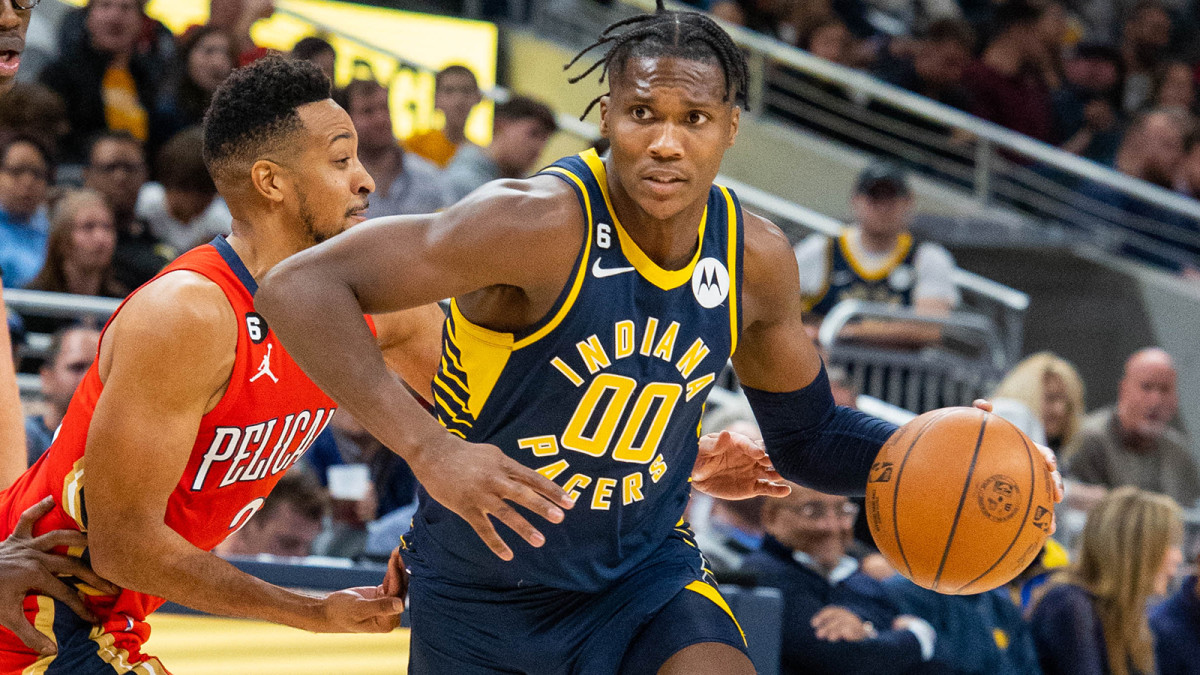 Indiana Pacer Bennedict Mathurin drives to the basket against the Pelicans on Nov. 7. Photo Courtesy of Trevor Ruszkowski/USA TODAY Sports.

Sports in Indiana mean much more to the Hoosier faithful than many other states can say about their pro sports teams. While it has not exactly been the best go around for some of their beloved teams in recent years, there is young talent ready to bring excitement about what is in store for the future of these professional sports teams.

Here are some of the top rookies throughout all the professional Indianapolis sports teams.

Sam Ehlinger scrambles outside of the pocket in his first career NFL start against the Washington Commanders on Oct. 30. Photo courtesy of Justin Casterline/Getty Images.

Heading into the regular season, the league-wide expectation was that veteran quarterback Matt Ryan was going to be the starter for the Colts for the foreseeable future. Well, things have not gone to plan, as Ryan has thrown the same amount of interceptions as he has touchdowns, and has been sacked a whopping 24 times. After a dreadful offensive showing against the Titans in week seven and a shoulder injury that has since sidelined Ryan, the Colts announced that Sam Ehlinger would be the starting quarterback for the rest of the season.

Ehlinger, who was a sixth-round pick out of the University of Texas in 2021, made his first start on Oct. 30 against the Commanders. In college, Ehlinger was widely known for his strong arm and dual-threat ability for the Longhorns and displayed some of that in his first career game on the NFL gridiron.

Ehlinger’s first two games have been a tale of two halves. In his first game, Ehlinger showed flashes of excellence, going 17-23 with 201 passing yards and zero turnovers. Game two was a different story. Ehlinger had just 103 passing yards, a passer rating of 45.6 and was sacked a whopping nine times.

While Ehlinger is off to an 0-2 start in his pro career, he has still shown signs that he can be a solid quarterback at the NFL level. There are still a lot of questions that need to be answered within the Colts organization after the firing of Frank Reich, so do not count out Ehlinger considering the situation he is in. Peyton Manning had a terrible rookie season and he turned out fine. Give him time.

Bennedict Mathurin pumps his fist after an and one. Photo courtesy of Trevor Ruszkowski/USA Sports Today.

The Pacers entered full rebuild mode last season, trading away their star players in Caris LeVert and Domantas Sabonis. While the sky seemed to be falling for the Pacers at the time, the young players they were depending on have been thriving under the spotlight, including their first-round pick Bennedict Mathurin.

Mathurin, the sixth overall pick from the University of Arizona, has been better than anyone could have imagined, averaging 19.4 points per game and shooting 40.3% behind the three-point line.

Pairing Mathurin up with Tyrese Haliburton gives the Pacers one of the youngest and most exciting backcourts in the NBA. Something special is brewing in Indiana.

NaLyssa Smith was drafted by the Indiana Fever on April 11. Photo courtesy of slamonline.com.

Smith made Fever history by scoring the second most points of any Fever rookie in franchise history with 433 points as well as the third most double-doubles by any rookie with eight.

Smith was one of the bright spots in what was a rough season for the Fever. If the 22-year-old phenom continues to develop for years to come, then the future for the Indiana Fever might be a bright one.

The Triple-A affiliate for the Pittsburgh Pirates saw a lot of players come and go, but one player that consistently hit for the team all season was second baseman Ji-Hwan Bae.

Bae showed off his elite speed and contact by swiping thirty bases and had a .289 batting average in 108 games at the Triple-A level. Bae also displayed an ability to put the bat on the ball, striking out only 80 times in over 400 at-bats.

Bae’s power is a work in progress but has consistently gotten better throughout his minor league career. He set a new career high with 37 extra-base hits, which included 23 doubles, six triples and eight home runs.

Although he is not listed as a Top 30 Prospect in the Pirates minor league system, he certainly performed at a high level in the closest level to the majors. The Pirates can use someone like Bae who brings a scrappy, small-ball approach to a team that had the worst team batting average out of any club in the National League.