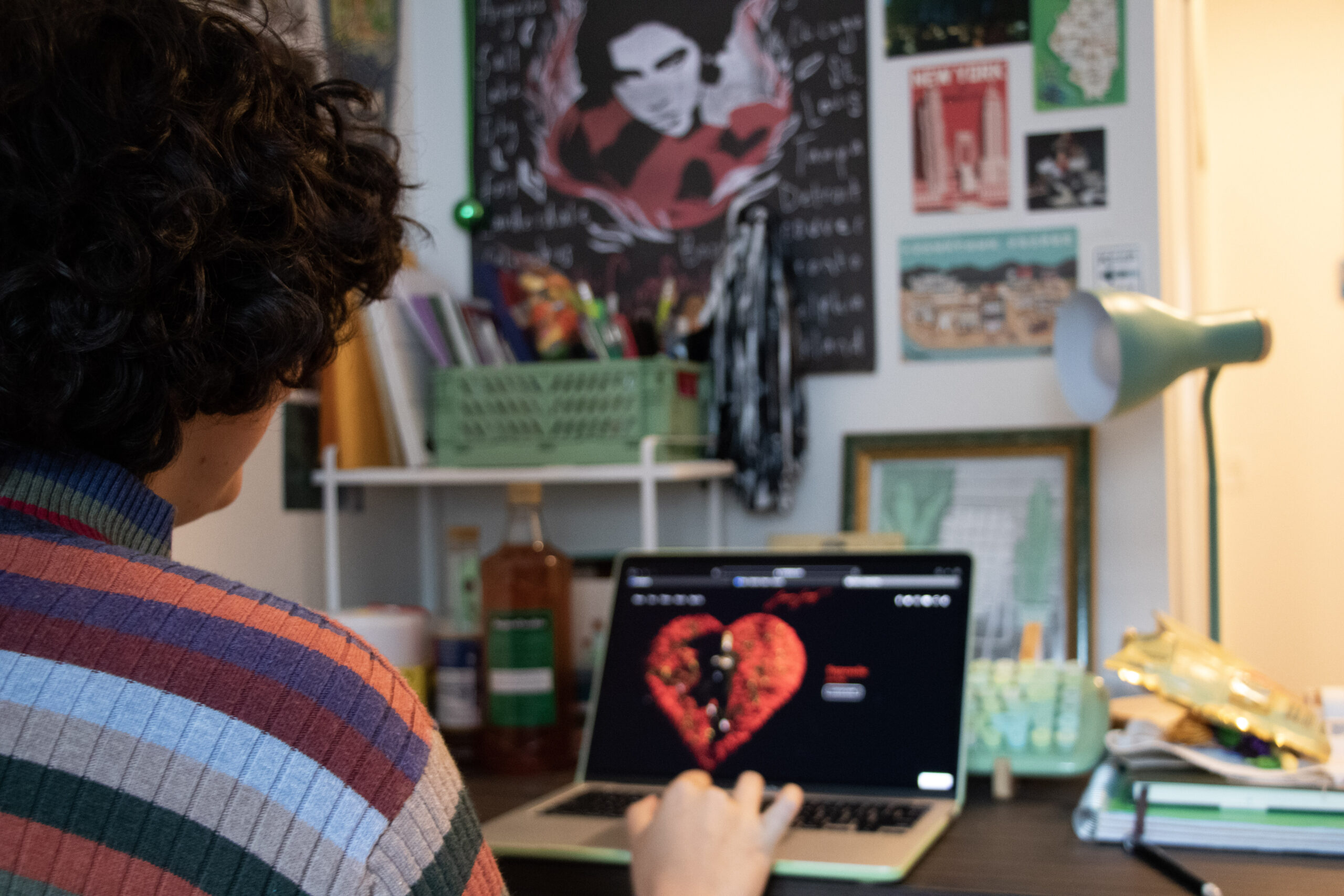 Fangirls are tired of being made fun of for what they like. Photo by Jada Gangazha

Imagine this. You walk into your GHS class on a lovely Monday morning wearing your Colts sweatshirt after they won the night before. You sit down and the person next to you looks over and has the audacity to say, “Do you actually own Colt’s merch?” or, “They aren’t even a good team,” or “Why would you ever spend money on that?”

It’s no secret that I am a Harry Styles fangirl, but it is also one of the things that I get the most hate for. Do not worry though — it does not stop me from proudly wearing my merch, having posters on my walls and posting about him on Instagram.

Belle Echeverria, a sophomore international business major, spoke about what being a fangirl is to her.

“It’s someone who knows a lot about them,” Echeverria said. “Kind of knows their discography, just a lot more than the casual listener would.”

I choose to follow Harry Styles because I love his music, movies, outfits and himself as a person. I have loved him for 12 years, so obviously I am going to talk about my music choices.

I do not understand why some think that liking certain artists warrants calling them crazy or obsessed. I have never told someone that they’re crazy for liking a sports team because doing so would be ridiculous and unwarranted. Everyone needs to stay in their own lane when it comes to what others like.

Macy Cansdale, a junior youth and community development major, talked about how she only tells others about being a fangirl when they are as well.

“I think fangirls get a lot of hate, and you kind of have to hide it,” Cansdale said. “I only expose it when I’m around people that I know have the same interests.”

Hiding that you like a musical artist feels so outrageous to me. Men who are sports fans are allowed to proudly cheer for their favorite teams, but when women fangirl over a male artist, they get mocked as obsessed or fanatical. Last time I checked, going to a concert and a football game are not all that different.

As we obviously all know, sports are fine to like because it’s masculine, and of course men obviously could never be crazy. But when a woman listens to an artist, knows a little about them, and maybe owns some merch, they get called obsessed. If you’ve ever seen a group of men huddled around the TV in near hysterics during the Super Bowl, you know exactly how ridiculous this is.

Echeverria talked about how sexist and hypocritical this stereotype is.

“Guys will be a fan of a football team and then know everything about every player and what position they play and when they were drafted and all these things,” Echeverria said. “Then people look at me like I’m crazy when I can tell you Harry’s blood type.”

Society teaches us from a young age that sports are for men, and pop music is for women. Yet female supporters of the music industry get ridiculed, while men can happily cause riots over a sports team.

Why is it that fangirl-adjacent hobbies get hate, but masculine-associated things do not? The brigade n fangirls hurts men, too. I know quite a few men who love pop music but would never associate themselves with fangirls because of the reaction they would get from society. Men who like female artists can be quickly called homophobic slurs, when in reality, what is wrong with a man liking Doja Cat?

Cansdale questioned why men tend to hide if they are a “fangirl” more than women might.

“I wonder if some guys are fans, but don’t want to show it off as much because they’re scared of being stereotyped or something like that,” Cansdale said.

This is exactly why the hate, comments and judgment toward fangirls and stans need to stop. We need to normalize not yucking other people’s yum. Fangirls hide the happiness that certain artists might give them because they know someone is gonna be mean about it.

I get hate for liking Harry Styles so frequently that I’m desensitized to it at this point. It just gives me a better chance at winning the war for Love on Tour tickets. However, for fans that are just starting to like an artist, someone’s nasty comment should not turn you away from something that brings you joy.

We need to let everyone enjoy what they enjoy, get excited over what makes them happy and live the life they want to live. This is something that a lot of artists emphasize.

Aidan Geleott, a sophomore secondary education and Spanish double major, talked about why we need to respect one another when it comes to music taste.

“I feel like everyone needs to just respect each other’s happiness and that’s gonna lead to the best world,” Geleott said.

Next time you are tempted to say something mean about someone involving their amazing status as a fangirl, I hope you hear Harry Styles’ voice telling you to treat people with kindness.