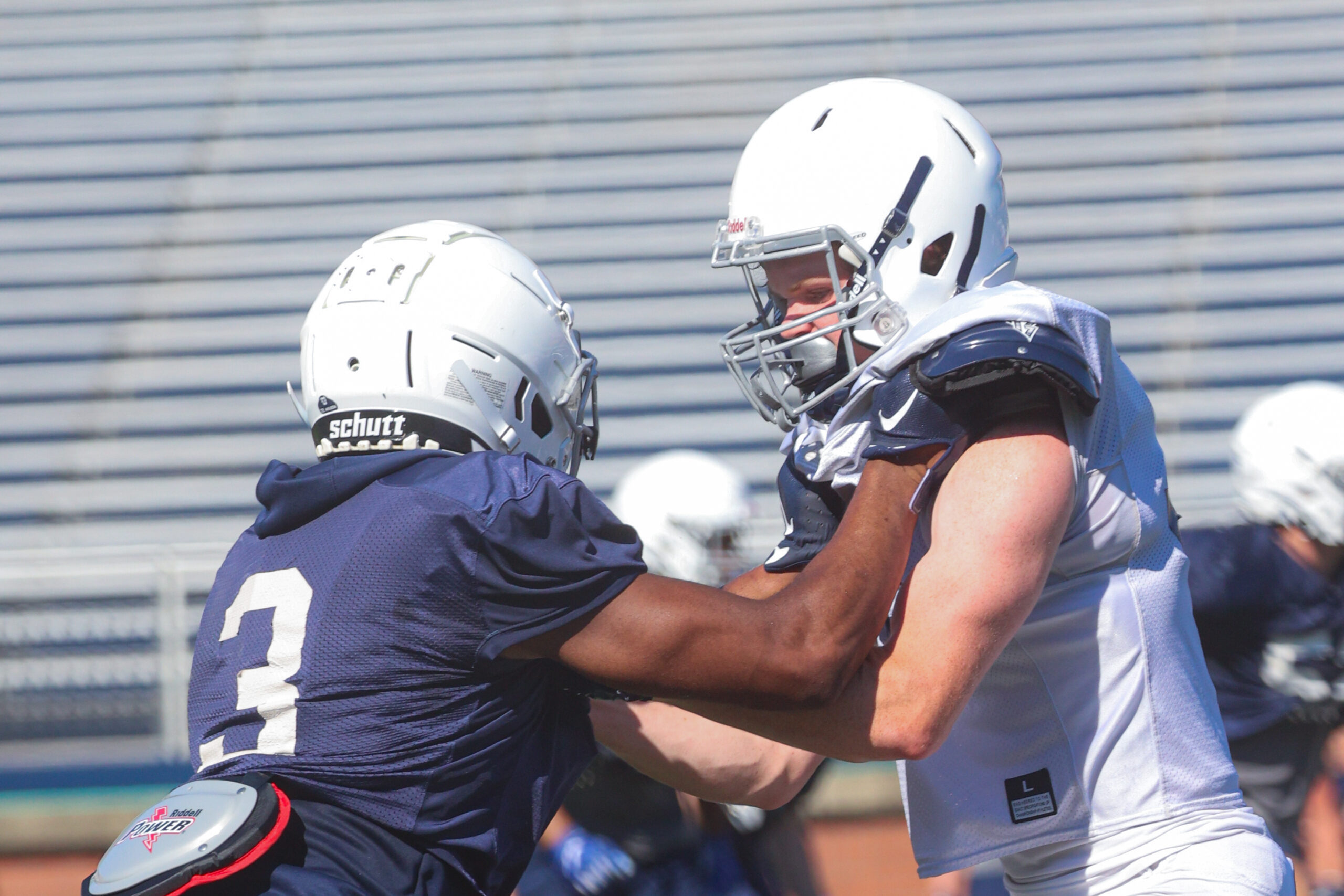 The Bulldogs battle it out in practice as they look to finish the season strong. Photo courtesy of Claire Runkel.

Butler football lost their first game in over a month in an upset to Drake 27-24. Butler showed fight, as they erased a double-digit deficit but were unable to close out the game. The Butler offense played well, dominating the time of possession and outgaining Drake 351-324.

Butler got the first score of the game to cap off a 10-play, 63-yard drive. Redshirt junior quarterback Bret Bushka found redshirt senior receiver Johnny O’Shea for a 23-yard touchdown to put Butler ahead 7-0.

Drake responded with scoring drives of their own. The next drive, kicker Luke Williams knocked through a 31-yard field goal to cut the lead to 7-3. Following a Butler fumble in their own territory, Drake orchestrated a scoring drive that was just two plays and nine yards. Dorian Boyland found the endzone on a three-yard touchdown run to give Drake the 10-7 lead.

After forcing Butler to punt, Drake got the ball back near the end of the first quarter and scored once again. Davion Cherwin scored a 31-yard rushing touchdown that extended the Drake lead to 17-7.

In the second quarter, Butler scored to cut the lead to 17-14. Bushka found redshirt freshman receiver Luke Wooten for a 29-yard touchdown to cap off an eight-play, 62-yard drive.

Drake would respond with three seconds remaining in the half. Quarterback Luke Bailey found Colin Howard for a 41-yard touchdown to give Drake a 24-14 lead going into the break.

To start the second half, Butler took advantage of a Drake fumble and led a four-play, 42-yard drive that was capped off by a 32-yard reception by graduate receiver Tyler Adams from Buhska. The score cut the lead to 24-21.

Scoring in the fourth quarter was sparse. The first score came with just under five minutes to play. Redshirt junior kicker Luka Zurak tied the game at 24-24 with a 33-yard field goal.

The Drake defense forced Bushka to throw an interception on the Drake 44 yard line. Drake closed the game out with a 22-yard field goal from Williams to give them the 27-24 victory.

Butler drops to 7-3 on the season and 5-2 in PFL play with the loss. They close out the regular season on Saturday, Nov. 19 against St. Thomas (Minn.). Kickoff is set for 12 p.m. for senior day at the Bud and Jackie Sellick Bowl.