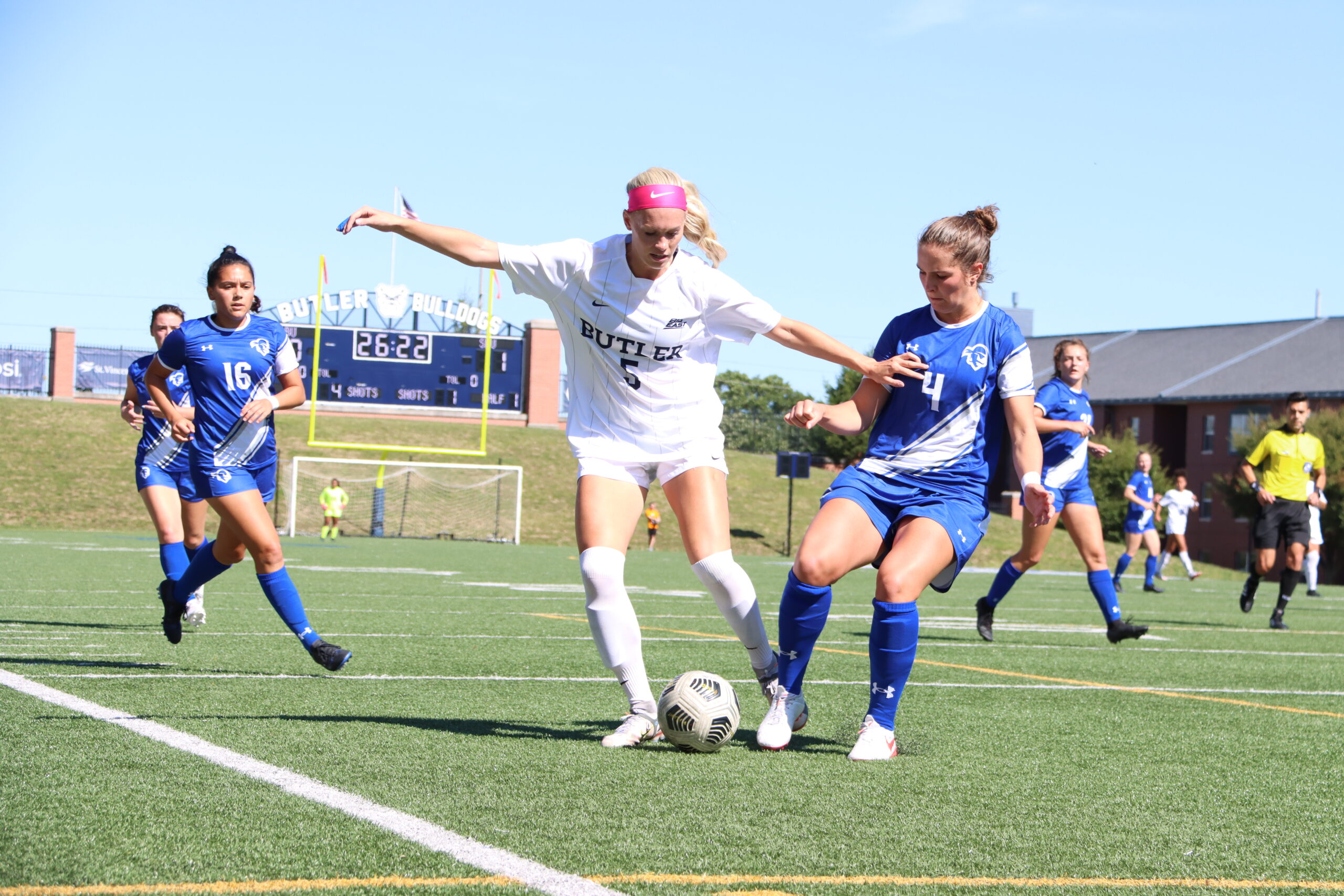 Amanda Kowalski battles for a ball with a Seton Hall defender in a match on Sept. 26, 2021. Collegian file photo.

Nov. 12, 2021, was an emotional and memorable day for Butler women’s soccer alum and current Chicago Red Stars defender Amanda Kowalski. The Bulldogs had just lost to Wisconsin in the first round of the NCAA Tournament 2-1, ending her nearly six-year-long run with the program.

Kowalski, who started in 66 of the 92 matches she played in, finished with six goals and 16 assists in her Butler career. She was also awarded the Big East Defensive Player of the Week three times and was a member of the 2021 All-Big East Second Team.

Kowalski had quite the unique experience at Butler. She began her collegiate career in 2016, having to redshirt her freshman year after tearing her ACL prior to arriving on campus. Following three consecutive seasons of being healthy in 2017, 2018 and 2019, Kowalski, like many student athletes, had her 2020 redshirt senior season affected by the pandemic. After finishing her delayed redshirt senior season in the spring of 2021, Kowalski finished off her collegiate career with her fifth-year of eligibility in the 2021 season.

Two things were consistent for Kowalski throughout her time at Butler: hard work and being a great teammate. Butler senior defender Alana Wood, who was a teammate of Kowalski’s for three seasons, remembers Kowalski welcoming her and the other first-years in with open arms.

“From the very beginning, she was a great person for all of us freshmen to look up to,” Wood said. “And then throughout the years, she became another person in my life that I could go to and trust with anything.”

A little over a month after her season ended, Kowalski decided to put her name in the 2022 National Women’s Soccer League — NWSL — Draft even though she wasn’t sure that she was going to get drafted.

“I kind of did it just so that I could have the opportunity to get invited into a preseason camp, which is exactly what happened,” Kowalski said. “The assistant coach gave me a call. And she basically asked me if I wanted to be a discovery player for the Red Stars, and basically try out for the team during the preseason.”

Kowalski had spent three summers playing with the Red Stars reserve summer league team while still in college. She tried out with the Red Stars during the preseason starting in February, and when the roster cut deadline arrived, she was informed that she was not one of the players being let go and was signed to a national team replacement contract, which meant that she would be signed to be a part of the team when players left for their national team commitments.

This alone was already a dream come true for Kowalski. Wood recalls how excited she was for this initial opportunity.

“I remember her texting me throughout that month and being like, ‘I love it, this is all I wanted … I love being here,’” Wood said. “She’s like, ‘Even if they don’t sign me, I’ll be really upset, but I’m gonna keep working.’”

Kowalski was content with just being able to practice and be around the team on a daily basis while waiting for her opportunity. However, Tierna Davidson, the national team player that she was set to replace, tore her ACL during the preseason and missed the entire season. A little over two weeks later, the Red Stars signed Kowalski to a three-year contract with a fourth-year option.

In addition to being able to play for her hometown team, the Arlington Heights, Ill. native was able to have one of her closest longtime friends as a teammate. Fellow Red Stars defender Tatumn Millazzo has known Kowalski since the two played with the Chicago Eclipse Select club team at age 11. Ever since she heard the news of the signing, Milazzo was very glad that the pair has been able to reunite.

“I think it’s really comforting having someone that you’ve known for so long that no matter what, even as a teammate or a friend on the field, it’s really comforting to have her there,” Milazzo said. “I think we know each other the best out of all my teammates, so it’s really helpful to be able to talk to her about just about anything that comes up either field, team, or life stuff since we’ve been friends for so long.”

Kowalski has taken full advantage of her new opportunity. She played in 17 of the team’s 22 matches, starting in 12 of them and scoring three goals. The way in which she scored those goals, however, deserves additional significance as it shows her development as a player.

“In all of my years at Butler, I never scored on a header and I never really liked heading the ball in an attacking position,” Kowalski said. “I never thought I was very good at it and then I go to the pros and I score three headers, so that was a big switch up for me.”

While her journey to the pros was different than most, the people close to her aren’t surprised at all that she was able to make it.

“I knew with her setting her eyes on doing that she was going to be able to accomplish it,” Wood said. “She’s very driven and very passionate about what she does … and she puts so much work in over the off-seasons and summers.”

Kowalski’s rookie season came to an end after the team’s 2-1 playoff loss against the San Diego Wave on Oct. 16. While it obviously didn’t end the way she would have liked, the break has given her time to reflect on how exciting the last 12 months have been.

“Life comes at you fast,” Kowalski said. “I think [back to] a year ago today, when I was still playing in my college soccer season … there would be no way you could tell me that this is what my life would look like a year from now and that I would actually believe you, but it is pretty cool.”