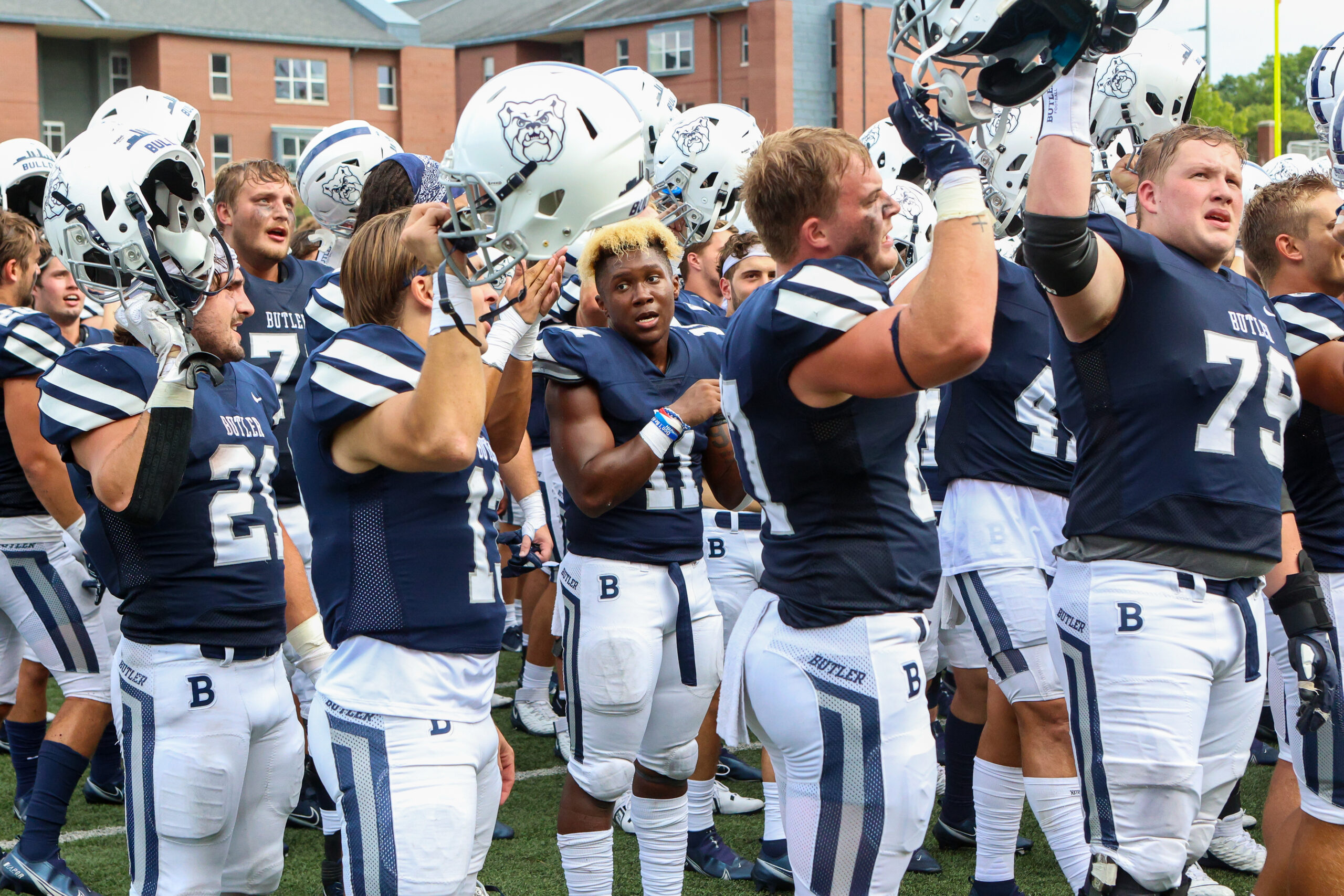 The Butler football team gathers to celebrate a victory over St. Thomas on Sept. 3. Photo by Claire Runkel.

‘Welcome to the Team’ is a Q&A series where the Collegian sits down with first-year student-athletes who are entering their first season at Butler University. These articles will address why they chose Butler, what they hope to get out of their first season and some personal tidbits that you won’t find anywhere else.

This week, sports reporter Michael Terzakis sat down with three first-years who are playing for Butler’s football team: Reagan Andrew, Steven Williams II and Will Mason.

Reagan Andrew is a 5-foot-7 first-year quarterback and business major from St. Louis. Andrew was a four-time all-conference selection in high school as well as an all-state selection in 2021.

Michael Terzakis: When visiting colleges and their football programs, what stood out about Butler’s program from the rest of the places you went to?

Reagan Andrew: The new coaching staff and the mentality that they have as well as the culture they are trying to build. When I was on my visit, I was able to hang with the guys on the team, and they reminded me a lot of my friend group from home, so it was a community I could see myself being in as well as being successful in. I love the energy around the program, and I love the people here so there wasn’t much more I could ask for.

MT: How much have your relationships grown with your teammates since you first arrived?

RA: The locker-room is like a brotherhood. We’re all really close — it’s a great locker room to be in. I’m surrounded by a bunch of great guys. You also get the opportunity to be with guys from all over the place. There’re guys that are local from Indiana and Illinois and then there’s three guys who are from my hometown in St. Louis, so we were all able to bond right away. And then being able to travel with the upperclassmen and getting to know them and what they’re about is a lot of fun to be a part of.

MT: How much do you think creating personal relationships has to do with having better chemistry on the football field?

RA: It’s definitely a huge thing no matter where you are. But having that chemistry and that bond along with the trust in your teammates, especially the ones that are lined up next to you, is huge. Because if you trust that your teammate’s going to do his job, then there aren’t going to be many teams that can beat us if we’re on the same page all the time.

MT: Has it been difficult to balance school and football? And if so, what has helped you manage your time better?

RA: It’s not too bad. It’s definitely a different level in both aspects compared to high school. A little bit more taxing on the school part and a lot more going on in the football part, so balancing that at the beginning was a little bit of a struggle,but us having study hours and being able to get our work done for school really early on in the week has helped me a lot and has let me stay focused on the football side of things. I think I’ve handled it well so far, and the coaches are on top of it, so it hasn’t been that bad so far.

MT: On gameday, what’s getting played through the Air Pods to get you amped up for the game?

RA: I’m different from a lot of guys. On the bus or during a team meal, that’s when I like to listen to upbeat rap music but once we get in the locker-room, and we start locking in, I have to listen to some country or some jazz, because if I get too amped up before the game that’s when I start freaking out, so I just got to relax before the game and get my mind right.

RA: I’m definitely hitting up the tailgate. I’ll get some pulled pork, maybe a burger or two. Just enjoying the win with my family and being with the guys after a big win like that. Although I’m usually too tired to eat after games.

RA: I was born in Florida [and] my brother’s a huge Jags fan, so I got to go with the Jacksonville Jaguars.

Steven Williams II is a first-year defensive lineman from Wake Forest High School in North Carolina. Williams was a conference champion and racked up 95 tackles and six sacks his senior season. He studies entrepreneurship and innovation.

MT: Now you’re from NC, so I want to ask, have you noticed a change in the style of football that’s played here? And if so, how have you adjusted?

SW: Just a little bit. In North Carolina, we have some “hittas,” so I’m used to lining up against big, strong, shorter offensive linemen. But coming down here going against these kids, they’re huge. As a freshman I’m going against kids that are like 6’7, 270 [pounds] and it’s just a whole different level. Personally, I still think I’m getting it done as a freshman; I still got a lot to learn. But the play is definitely something different.

MT: How have you adjusted to getting by these bigger offensive linemen?

SW: In high school, I was bigger than most of them, so I would just try and bully them and use my strength to my advantage. I would try and push them towards the quarterback. But now, I figured okay, I can’t try and run towards them because if I do that I’m getting put to the ground. So now, it’s more of getting around them with my speed. I know I’m a shorter guy, especially for my position, but I don’t let that get into my mind. I just try and do what’s best for me.

MT: What’s your favorite thing about the Midwest so far?

MT: What do you miss most about NC?

SW: Obviously my family. Getting to see my brother play football— he’s a junior, and he wears number 11 like me. But besides that, I’d have to say this spot called Bojangles — all my North Carolina people know what it is. Definitely going to be hitting that up when I get home.

MT: I noticed you and Will Mason went to rival high schools. Is there a lot of banter that goes on in practice? Or is that all in the past?

SW: I actually got a funny story. We’re from the same hometown which means we are from the same prospect camp. So, every time I saw him, I always thought he was a stuck-up tough guy because he’s from a private high school. But when I met him, he was a really down-to-earth guy. But what really caught me off guard, is when he started singing. He’s a real avid singer, he likes to have fun, and we get along really well.

MT: If you had to choose one food to eat for the rest of your life, what would it be?

MT: Give me your top 3 favorite rappers.

SW: I like Drake at one. As of the headspace I’m in right now, I got to go with Lil Durk at two and Lil Baby at three. It really just depends on what I’m feeling though.

SW: Chargers. I don’t care who they play. Give me the Chargers.

First-year defensive back Will Mason looks onto the field during Butler’s game against St. Thomas on Sept. 3. Photo by Claire Runkel.

Will Mason is a first-year defensive back from Cardinal Gibbons High School in North Carolina. Mason was a first team all-state selection in 2021 as well as a two-time state championship game MVP. Mason is currently an exploratory studies major.

MT: What has been the biggest adjustment from the high school level to the collegiate level?

WM: The speed and tempo of the game. In high school, I never really got tired. But now in college, everything is nonstop and consistent. Also, the physicality is so much different. Guys go 100% every single play like it’s their last.

MT: Do you feel you have fully adjusted to the level of play, or do you feel like you still have more room to grow?

WM: I feel like as an athlete, you can never really fully adjust to any level of play because there is always something new for you to learn. Football is a constantly changing game on every level and there are new coaches coming up with new concepts and new techniques. I think I’ve adjusted enough that I feel there is no excuse not to play a great game. But at the same time, there’s always going to be something new that I can learn and understand about the game.

MT: Now you and your brother [Trey] are reunited together on the football field. How has been lining up together on the defensive side of the ball at this level? And how has he helped you adjust to the college level?

WM: It’s been a great opportunity. Sometimes I wake up in the morning and forget we have a team meeting, and he’ll text me and remind me. But in all seriousness, he’s a great resource for me. He’s taught me a lot about playing at this level; he’s taught me a couple of tricks — how to work, how to be effective when I’m working my techniques and new things that I wouldn’t know without him.

MT: Did your brother play a big role in you deciding to attend Butler?

WM: I’d say so. Butler’s a great place as it is already. But knowing my brother is here was really nice. I wouldn’t say he was the reason I came, but he played a role.

MT: Who on the team has the best aux?

WM: Outside of me, probably my brother. Although he probably gets it from me. He’s pretty consistent with aux, after every single game, coach tells him to get on the aux, and he plays a celebratory song.

MT: What’s he playing on aux?

WM: He likes Gunna. But he does a good job keeping the variety different from everything else.

MT: If you can guard one NFL receiver, active or retired, who would it be and why?

WM: Probably Davante Adams or Julio Jones. Davante got the best release off the line; I feel like that would be pretty hard to guard. For Julio, he’s the best combination of size and speed, and being a shorter guy, I’d love the challenge of guarding someone like him.