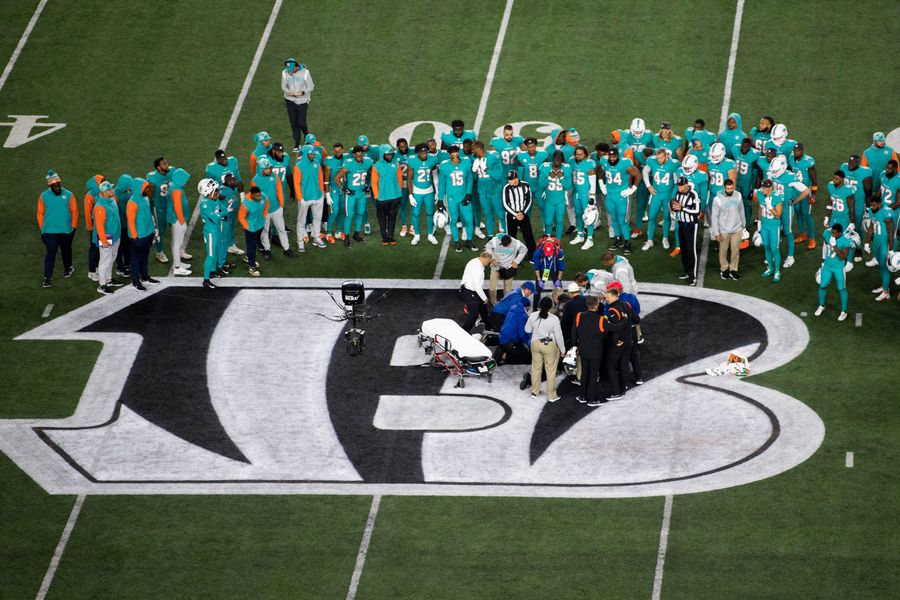 The Miami Dolphins’ team gathers around quarterback Tua Tagovailoa as he is taken off of the field on a stretcher on Sept. 29 in Cincinnati. Photo courtesy of Emilee Chinn/Associated Press.

Miami Dolphins quarterback Tua Tagovailoa exited the game in the second quarter of their week three match-up against the Bills last Sunday.

Tagovailoa noticeably stumbled on his way back to the huddle after his head hit the turf. The team initially said the quarterback was being evaluated for a head injury, but then changed his diagnosis to a hurt ankle and back.

He then returned for the second half of the game.

Tagovailoa was named available for the Dolphins’ following game on Thursday night against the Bengals and ultimately started. In the second quarter, the quarterback took a hit and his head once again slammed against the turf. This time, he remained on the ground with his hands clenched and locked due to a flexion response from the hit. He was carted off the field and taken to the University of Cincinnati Medical Center.

Tagovailoa tweeted the next day thanking everyone for the prayers and support, saying he is feeling better and is focusing on recovering so he can join his teammates back on the field. While it is a good sign to hear that the Dolphins’ quarterback is on the road to recovery, there is a big question mark that still looms here.

Can the Dolphins really put him back on the field anytime soon?

Investigations have been launched surrounding the Bills game and the medical professionals who cleared Tagovailoa to return despite exhibiting signs of a head injury. The neurological doctor at the Miami-Buffalo game was terminated from his position with the NFL by the NFLPA.

The team stated that he went through a medical examination at halftime and was allowed to return to the field based on the medical professional’s evaluation. An NFL spokesperson said on Wednesday that there was “every indication” that the doctors who evaluated Tagovailoa had followed the league’s concussion protocol.

The Dolphins’ coach Mike McDaniel is confident that the team and its medical staff followed concussion protocols correctly.

“If there’s any sort of inclination that someone has a concussion, they go into concussion protocol, and it’s very strict,” McDaniel said at his post-game press conference. “As long as I’m the head coach that will never be an issue that you guys have to worry about.”

The NFL’s concussion protocol was established to prevent further brain damage to players who have been playing tackle football since they were in middle school.

Chris Nowinski — a neuroscientist and founder of the Concussion Legacy Foundation — told the Washington Post that what happened to Tagovailoa on Thursday is a potential life-threatening brain injury. Multiple concussions  — especially in a short period of time  — can lead to brain swelling and additional problems.

“That’s why we should at least be cautious with the easy stuff, like withholding players with a concussion from the game and letting their brain recover,” Nowinski said.

C.T.E — chronic traumatic encephalopathy —is a degenerative brain disease found in athletes due to a history of repeated head trauma. The rising prevalence of C.T.E has increased the awareness surrounding players’ head injuries. The disease has been found in more than 320 former NFL players.

The neurological consultants work on each sideline at every NFL game to assist team doctors when it is thought that a player may have sustained a head injury.

Common sense would have said Tagovailoa should not have played the second half of the Bills game and not started Thursday night’s game. The quarterback was unstable after his injury against the Bills  — anyone could see that, medical degree or not.

The NFL and NFLPA made a joint statement on the matter.

“The joint NFL-NFLPA Investigation into the application of the Concussion Protocol involving Miami Dolphins’ quarterback Tua Tagovailoa remains ongoing,” the association said via Twitter. “Therefore, we have not made any conclusions about medical errors or protocol violations. The NFL and the NFLPA agree that modifications to the Concussion Protocol are needed to enhance player safety.”

As the investigation moves forward, Tagovailoa’s situation should be an example and set precedents to come for players’ health and safety.

Getting a player back on the field as soon as possible is a common mindset of coaches, players and especially fans of the game. No one wants to see their favorite player out for a game or an extended period of time.

Sam Ingham — sophomore business major and Miami Dolphins fan — wants to see the players on his favorite team take the field, but also understands the importance of their health and safety.

“The NFL is treated as a business and that’s why players get put back on the field despite injury,” Ingham said. “I think they should put player safety above everything else though. Because NFL players are actually real people and not just a pawn in the game.”

Tagovailoa’s exit on Thursday night was a wake-up call to the NFL and its fans. At least 12 players were removed from Sunday’s games due to concussion protocol, making it seem like Tagovailoa’s injury was on their minds.

The Cleveland Browns had parallels in a situation this week. Browns defensive end Myles Garrett was in a car accident on Monday, Sept. 26, where his car completely rolled over and he was taken to a nearby hospital. Garrett was released Tuesday morning with minimal injuries, but did show signs that a head injury could have occurred. Bruises and cuts covered his face and he appeared dazed while walking to the ambulance.

The Browns stated that Garrett was questionable for the game that would be played on the following Sunday. There is a possibility that Garrett would have been ruled out regardless, but what happened to Tagovailoa on Thursday likely played a role in the decision to sit him out.

Player health and safety has to take significance over the urgency to throw players back onto the field before they are fully recovered. Otherwise, the consequences will be severe.