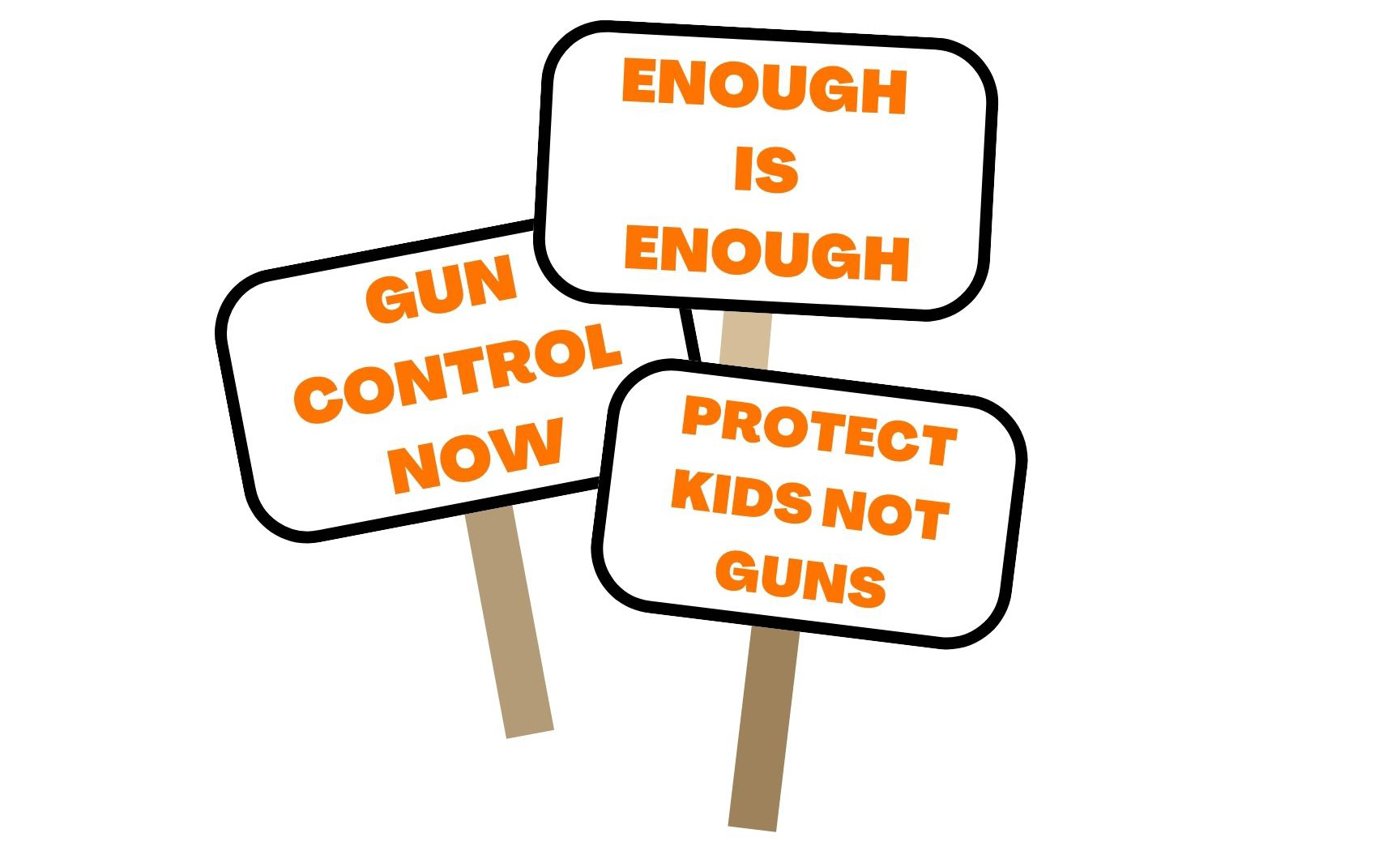 Thoughts and prayers get us nowhere. Graphic by Elizabeth Hein.

It was a normal day in first grade when we would have code red drills. The teacher would turn off the lights and herd us all to the corner — locking the door and demanding we stay quiet. I would get anxious when my classmates weren’t quiet — what if the bad guy could hear us?

It was a confusing afternoon after leaving my 4th-grade class and coming home to headlines about an elementary school in Connecticut, as I questioned why kids my age were running from the place they take refuge in every day.

It was a normal practice for me in 8th grade when I would scope out my classroom and determine a “just in case” plan. Identifying where I would hide, what window I would escape from and how I would save others in the process.

It was unnerving freshman year when my family received a call from the principal, informing us of a threat someone wrote on the bathroom wall. He assured us that the students’ safety was their number one priority, and advised that we stay home until the matter was resolved.

It was distressing junior year when my high school went under lockdown. I ran to the closest classroom and waited for some kind of information. I searched for phone service and texted all my family members, then passed my phone to other students who needed to contact theirs. When all was clear, we were expected to go on with the rest of our school day, as if we weren’t scared for our lives moments before.

It was relieving my senior year, as I walked across the graduation stage, thankful I made it out alive.

Growing up in the mass shooting generation has been one of the most difficult aspects of getting older in our generation. When you’re used to going to school every day, knowing full well you may not come home — that does some damage.

Although I was relieved after finishing high school, I am reminded that the threat to my safety is still very prevalent — shootings can happen anywhere: at church, a concert, a party, even a grocery store. Sometimes this anxiety prevents me from making or following through with plans; I’ve grown up scared, now I live my life scared.

This is a common narrative for most people our age, although not many people speak about it. Speaking as someone who has been fortunate enough to have never experienced a tragedy such as a mass shooting — and is still very anxious about the possibility — I can’t imagine what it would be like to live through it.

Sophie Love, a sophomore international business and marketing double-major, is from Highland Park, Illinois. Love was at her hometown’s 4th of July parade this year when seven people were killed and 48 were injured. Love detailed her experience that day in an email to The Butler Collegian.

“My friend’s mom was one of the victims, and my other friend was injured,” Love said. “I was at that parade and had to run for my life with thousands of other people. You never think it will happen to you or your town until it does.”

Highland Park is just one example of people dying while in an environment where safety is expected. Humans have a right to safety and to live their life freely, which needs to be more prioritized than the right to bear arms.

It’s natural that growing up in this climate has affected our daily behavior. In almost every conversation I have had with my peers surrounding this topic, we always talk about precautions that we’ve implemented in our day-to-day.

Justin Deem-Loureiro is a first-year political science major. Deem-Loureiro spoke about the effects this issue has had on the way he lives his life.

“In everything and anything that I do, or anywhere I go, I’m always aware of my surroundings,” Deem-Loureiro said. “Where are my exits? Where do I need to go just in case something happens? It’s just wired. We have to have that type of mentality.”

The fact that this is something we have to consider will always infuriate me. It’s constantly on the forefront of my mind and I have reason to believe it is a worry for most young people today. In reality, we can plan all we want, but when it happens, there is no way of knowing if there will even be time to react.

Samie New, a sophomore theatre major, opened up about the misconception of just how quickly things can happen in the event of a shooting. Her friend, Alex Schachter, was one of the victims of the Parkland shooting — only 14 at the time of his death. New explained that Alex had no time to react before he was killed.

“Alex didn’t even have time to escape the seat,” New said. “He literally stood up, and he was killed. He was still in his desk chair when he died. Some things just happen so fast that you’re not even aware it’s happening.”

One thing about our generation is that with a great deal of hardship comes a great deal of activism. Young people have risen to the occasion time and time again, and have done so in the face of people in power denying them. We have been told we don’t know what we’re talking about, although our experiences say otherwise.

New became involved in school safety activism after Parkland. New advocates on behalf of victims, and firmly believes in “no notoriety”— the practice of excluding the identity of mass shooters from media coverage.

“From what I’ve researched … a lot of mass shooters look for fame and look for their name to be on the news — even if they die, they just want their name to be known,” New said. “You shouldn’t mention the shooter’s name … you should talk about the victims.”

Activism has become a defining characteristic of Gen Z. Through social media, we are given a front-row seat to injustice, and a platform to challenge those injustices. Our experiences serve as a catalyst and our passion for change has sustained us.

Deem-Loureiro has been active in politics since he was twelve, but after the Parkland shooting, he became focused on gun safety activism.

“I got involved in Students Demand Action in Indiana … I went to the March For Our Lives, and I was creating awareness about the importance of that issue,” Deem-Loureiro said.

Something I am so proud of my generation for is how we handle the cards we have been dealt. Although I do believe that we were forced to grow up a lot sooner than we should have because of it, as we have tried to do the jobs that adults have failed to do.

Growing up in the mass shooting generation is a new experience —  no generation that has come before us can relate to us or guide us. It is something we have had to figure out for ourselves, without adequate support from people in power to help us change the world we live in.