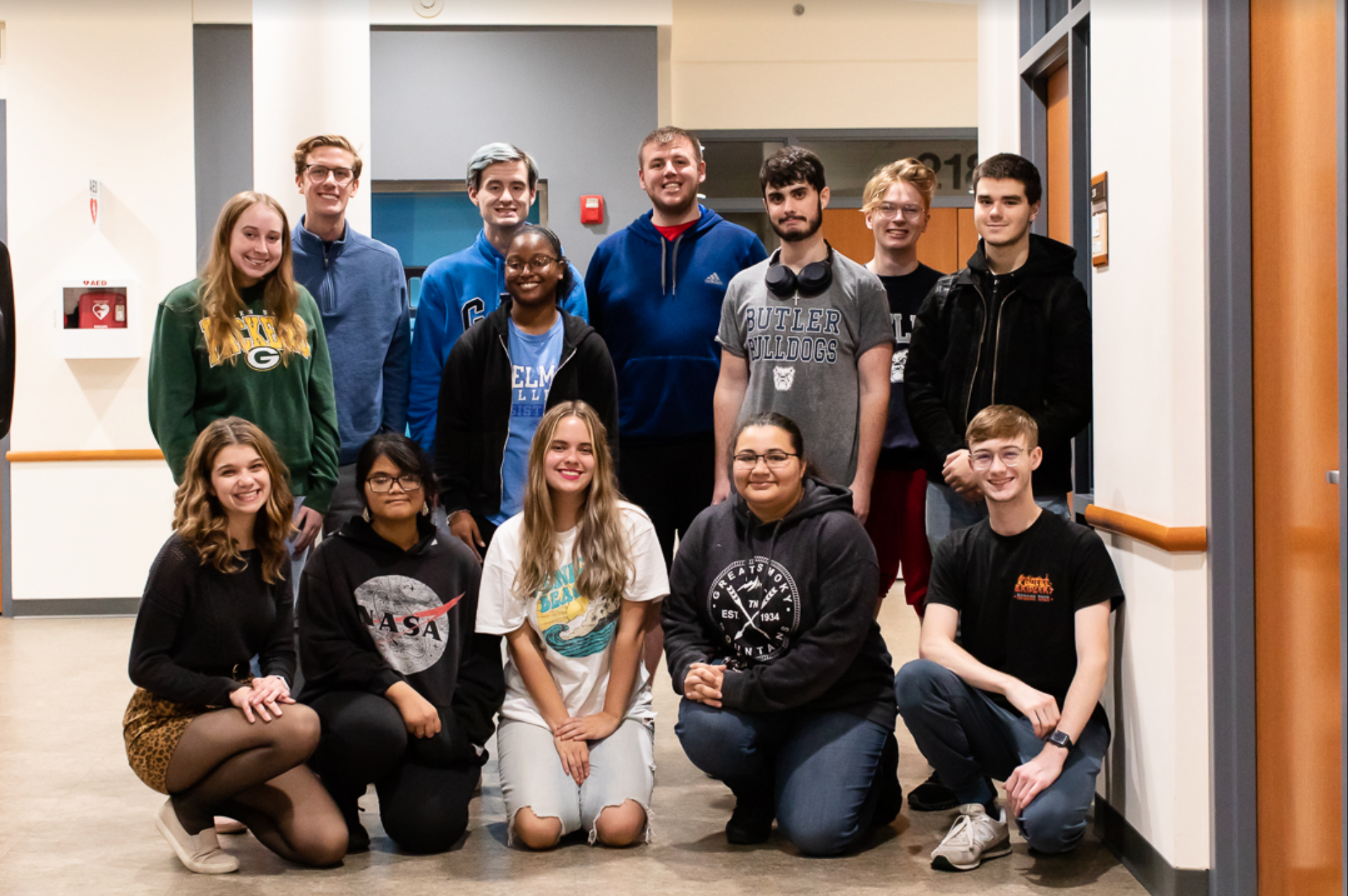 Butler’s Speech and Debate Team at one of their meetings this semester. Photo by Lauren Hough.

Speech and debate is more than just a competitive team for the members of Butler’s Speech and Debate Team. Through practices and competitions, it is evident that the team has strong bonds and ambitious goals. Dr. Janis Crawford — faculty advisor of the team and professor of communication and media studies — and Abby Kom —  junior organizational communication and leadership and music double major discussed different aspects of the team and what being part of the team means to them.

THE BUTLER COLLEGIAN: What is Speech and Debate Team?

JANIS CRAWFORD: Speech and Debate is a group [of Butler students] that travels to universities and does speeches, gets ranked, evaluated and wins. [The members] win tournaments. We’re involved in a particular kind of [competitive] debate called [the] International Parliamentary Debate Association. It’s one person debating another person on a topic that they get that day, and they have half an hour to prepare. In speech, there’s three different … types of speech. There’s what’s called “limited prep,” which is extemporaneous. There’s “platform,” which is persuasion and formative. Then there’s “interpretation,” which is the interpretation of literature.

ABBY KOM: Speech and Debate is twofold. The speech aspect of it is [that] you usually prepare a speech, something that you’ve written previously, and then it’s usually around 10 minutes. So it can be persuasive or informative, where you perform from scripts. There’s also limited prep speaking — impromptu or extemporaneous speaking —  where they give you a time to prepare it, and then you speak on the spot. Debate is a little bit different; that’s when you go one-on-one against a competitor. You pick a topic, and you get 30 minutes to prep that topic, and then debate it.

TBC: When do you meet? What do typical club meetings look like?

JC: We meet on Tuesday nights, at 7 p.m., and we basically talk about the upcoming tournaments. Occasionally, depending on the week, we may break off and practice things. Usually, practices happen individually with coaches. I had a couple of different students who came in, and we’re here for an hour, and we coach their events.

JC: There are a total of 11 different events [the team] could be doing, and the events are broken in half. There’ll be five [events] in one [round, which is known as a flight], six in another flight, and [the competitors] go to whatever event they have that flight. Sometimes, some of [the competitors] are double-entered. They have two events per flight. [For example], they might be doing informative and extemporaneous speaking in the same flight — they would go do their extemporaneous speech and then go do their informative. There’s usually two rounds of preliminaries and then a final round.

AK: Competitions are a lot of fun. Most of the time, we’ll travel and spend a night in a hotel. A lot of the time, there’s a lot of team bonding, playing games and hanging out on the bus. We really like to tell stories at dinner. The tournaments are really interesting. People usually start around 8:30 p.m. or 9:00 p.m., and each person will go to the events that they’re scheduled to compete in. For debate, it’s pretty similar. You’ll go and pick your topic with your competitor, and then everyone will help each other prep for 30 minutes. Then, we have awards at the end of the day.

TBC: What drew you to Speech and Debate Team?

JC: I’ve been doing this for a really long time. [Butler University] needed somebody to take over the team 20 years ago — I really enjoy working with the students on an individual basis. That, for me, is probably the best part.

AK: What I think is really interesting about Speech and Debate is [that] we have people from almost every college, [we] get people from all over the place. We have poli-sci majors, we have music majors, we have engineers, we have math majors, Spanish majors — everyone from a different aspect of campus. The reason why people should join Speech and Debate would be to improve their public speaking skills because you have to be able to communicate in almost any job you pursue. It’s just a really, really great group of people. [It’s] just a really fun atmosphere to get to know people and form strong bonds because it’s a team. You’re all working toward the same goal.

TBC: What are some of your favorite memories?

AK: We’ve always had a pretty strong rivalry against Marian [University], and last year, a lot of people took on extra speeches and extra events at state in order to try and beat them. We got second place last year, which is the highest we’ve ever placed at state, beating Marian University for the first time in over a decade. I think debate is usually a really fun time. I remember one time we were debating, it was actually a double debate. I got to debate with my friend. The [topic] we were debating was “this generation is too damn fragile.” My friend and I prepped this whole debate about why Gen Z isn’t isn’t that fragile, and why they’re really resilient. I remember our opponent defined Gen Z as the iPhone generation. So we had two very different things prepped and tried to learn on the fly. We ended up winning that round, which was a lot of fun, having not prepped anything about technology or iPhones.”

TBC: Why should students join speech and debate club? Why is it valuable?

JC: [Speech and Debate Team] is great. First of all, because of the ability to practice public speaking. For a lot of people, that’s a nervous thing. I teach public speaking, and I’m always like, “People are more afraid of public speaking than death.” Like, my class is scarier than death, right? So it’s great to get people more confidence when people are nervous about public speaking. Then, they get to just practice and get feedback. Everybody gets better, just doing it over and over again. That’s a really important part, I think, is to just get better and more confident in public speaking. The friends people make are really important because we do things as a team together. We have team meetings, and we have a Christmas get together with a [gift exchange] and we have a picnic at the end of the year. All of those friendships are built and last the whole time [students are on the team]. I’ve had a couple of different students say, had it not been for the team, they would probably not still be at Butler. It’s all about connections.

AK: Speech and Debate is super valuable. I think something I haven’t touched on yet is it also helps your writing skills. Being able to accurately articulate a point you’re trying to get across, coming up with reasons for why you believe that and evidence to support that I think is really, really important. Even if you’re great at public speaking, you can find aspects of Speech and Debate that push you to do something that you’ve never done before. I know debate was something that I originally was like, “I’m going to do this one time and be done.” I’m not very good at prepping things with limited amounts of time. I ended up absolutely loving it to the point where I’ve won tournaments with it. It’s just trying something new, I think is really, really great for something like Speech and Debate. It’s just a great environment to experiment with things that you’re not super confident at.