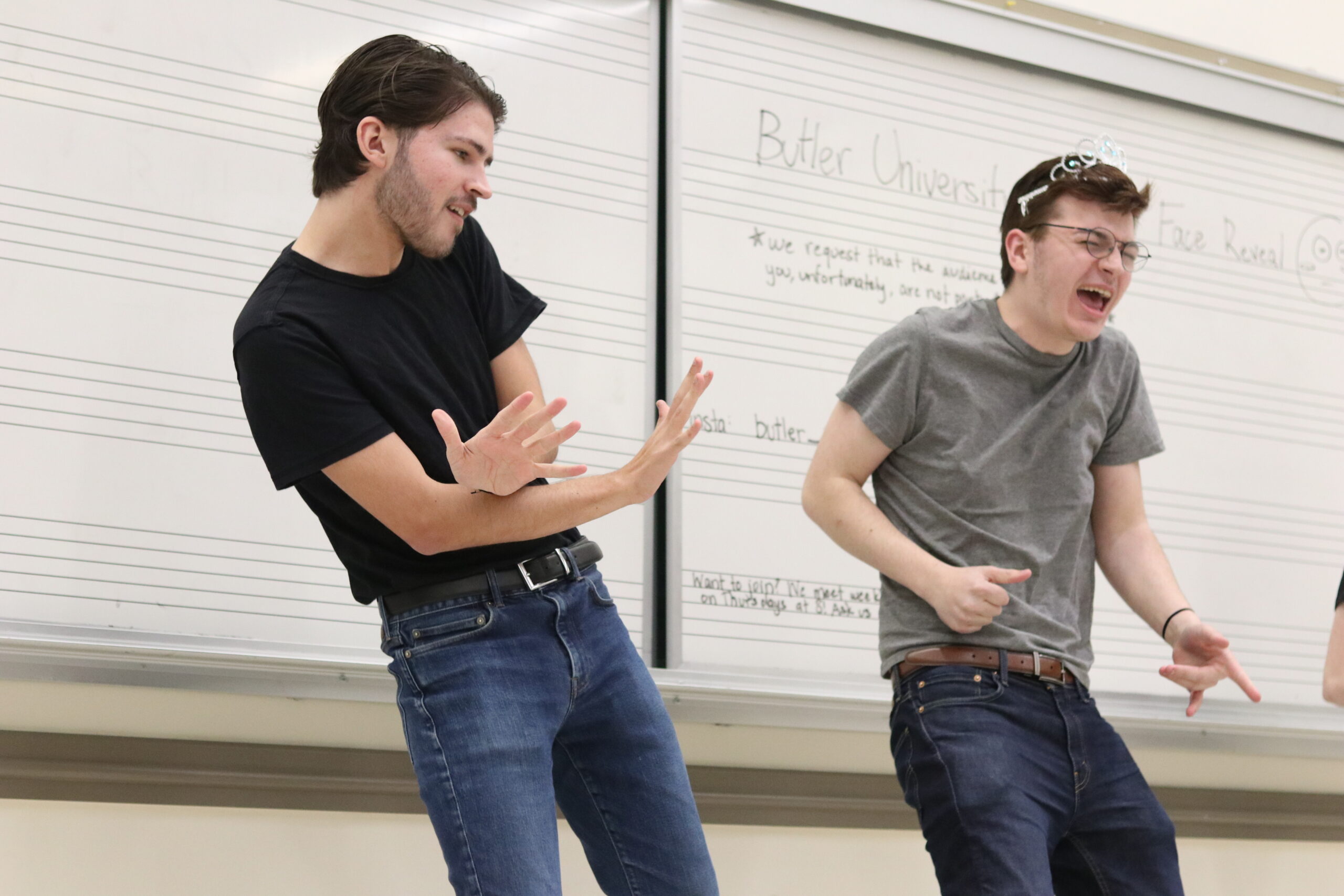 Whose line is it anyway? The BU Improv Troupe’s, we think. Photo by Francie Wilson.

For some, speaking in front of an audience without preparing anything beforehand is their biggest nightmare. For the Butler University Improv Troupe, this is a weekly occurence.

The BU Improv Troupe is a student organization that practices improvisational comedy, and last Thursday, March 31, they held their third performance of the academic year in Lilly Hall. The group showcased their skills with games such as “Press Conference” and “Party Quirks.” These games are practiced beforehand but start with a new prompt every time and rely on the creativity of the performers to create a funny and engaging scene. While acting is an important skill for improv, its spontaneity means other skills are just as important.

Seamus Quinn, a first-year journalism and theatre double major, said along with timing, communication and patience are key when working with scene partners.

These skills are put to the test as scene partners in improv have to think on their feet and create the material right on the spot. In the game “Party Quirks,” all but one of the actors in the scene was assigned a character or trope, and the other actor has to use the scene to guess who they were. Games like this test the performer’s communication and observational skills.

However, the most important aspect in improv is comedy. The point is not to do the best acting job possible but to go with your gut and have fun.

Louise Irpino, a senior English major, said that the lack of pressure makes improv enjoyable for her.

“There’s a lot less to be nervous about because you don’t have to have experience,” Irpino said. “It’s very low stakes, but it’s also very fun.”

The audience is included in on that fun. At the March 31 show, each scene started with prompts chosen by audience members. Some games also allowed for audience participation. In the last game, called “Freeze,” audience members could join in the scene by saying “freeze” and taking the spot of a performer. This can make the show more engaging and less intimidating for audience members.

Same Hoke, a junior music education major, said that he enjoyed the audience participation because it reminded him of his past improv experiences.

“I did improv my senior year of high school, so I really liked kind of going back and just having fun remembering what it was like,” Hoke said. “A lot of times when you see a show on campus it’s usually just them presenting them to the audience … This one is very audience-participatory.”

With their unique concepts, fun games and audience participation, BU Improv Troupe continues to bring creativity and entertainment to Butler. Check out the BU Improv Troupe Instagram account @butler_improv to stay up-to-date on their shows or find more information, including recordings of past shows.

The improverinos improv’d their way to im-providence in their “face reveal” show on March 31. Photos by Francie Wilson.