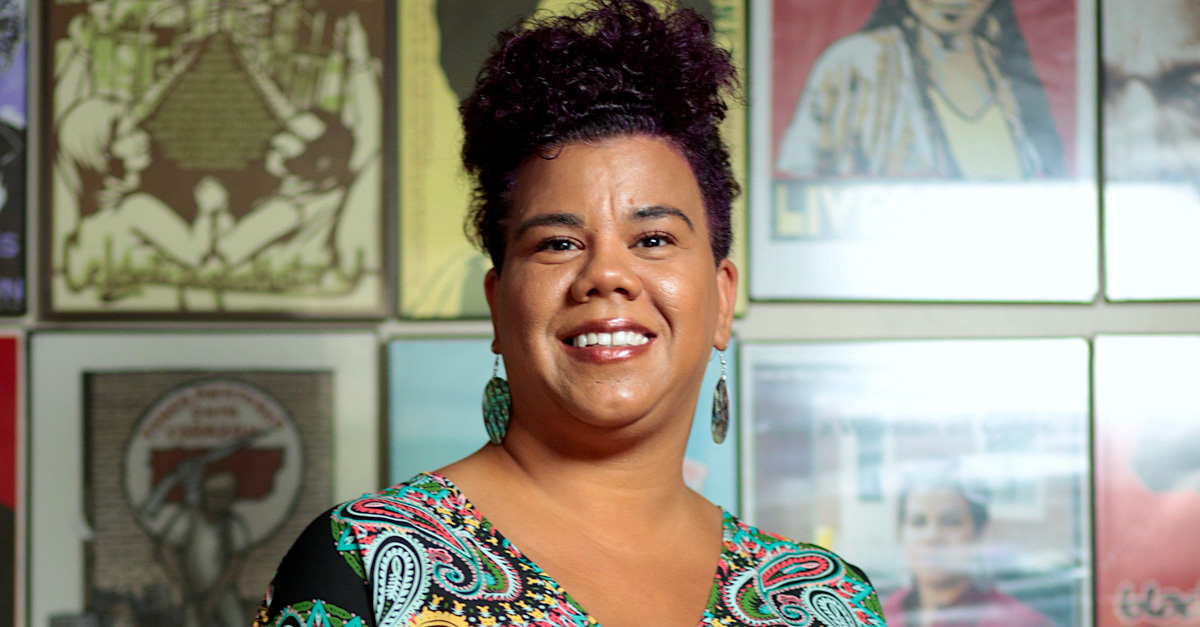 Clemente will visit from Sept. 20 to Sept. 22. Photo courtesy of KFPA.

Clemente is a prominent Black and Puerto Rican community activist who is completing her PhD at the W.E.B. DuBois Center at the University of Massachusetts Amherst. Her work focuses on Black and Latinx liberation, colonialism in Puerto Rico and third-party politics. In 2008, Clemente notably campaigned as a vice presidential candidate for the Green Party.

Clemente is also an independent journalist who covered Hurricane Maria and Black Lives Matter protests in Ferguson, Missouri. She has created multiple documentaries and recently was associate producer on “Judas and the Black Messiah,” a 2021 film about the assassination of Fred Hampton, the Chicago Black Panther party leader, in 1969.

Alexis Newell works as project specialist for the Hub. She said they found Clemente on Instagram, and they were drawn to her prior experiences and speaking skills.

The Hub was created in 2020 after George Floyd’s death with the goal of re-centering Butler’s commitment to the Black community to continue Butler’s founding ideas of progressive abolitionism. Newell said part of the Hub’s goal is to make sure those founding ideas do not get lost.

“Essentially, this idea is ‘how do we bring Black intellectuals to campus to not just speak at people, but we want to have them engage with the community, to be here and do workshops and speak out to the larger Indianapolis community?’” Newell said. “How can we use their scholarship and not just hear it, but be able to really engage with it?”

Clemente’s first event of the week was a film screening of “Judas and the Black Messiah.” She gave remarks before the film. The screening was at the Kan-Kan Cinema in Broad Ripple, Tuesday, Sept. 20 at 7 p.m. The event was open to the public and tickets cost $12, but Newell said ahead of the screening that students with financial hardship could reach out to the Hub for assistance with ticket pricing.

On Wednesday, Sept. 21, Clemente will be participating in a community conversation about “The Black Panther Party: A Graphic Novel History” by Marcus Kwame Anderson and David F. Walker. The event will take place at the Belmont Beach park at 6 p.m. and is free and open to the public as well. Newell said it is more inclusive to have events that are not in a university setting and are open to the Indianapolis community at large.

“[The community conversation] is very informal,” Newell said. “Food will be provided, [and] people can really engage with the literature with her. It doesn’t have to be in this stuffy setting. We wanted people to feel invited to be there, to talk about the work and ask questions.”

Clemente’s final events of the week are on Thursday, Sept. 21. From 2 p.m. until 4:30 p.m., Clemente will hold open office hours in the Hub space, located in Jordan Hall room 171, open to any students. At 7 p.m., in Shelton Auditorium, Clemente will give a free public lecture on “Black & Brown Power: Community Organizing and Social Justice Movements in the U.S.”

Brisa Rivera is a creative writing and Spanish double major and member of Butler’s Latinx Student Union. She said having Latinx professors, like Clemente, visit campus is important because being Latinx can mean many different things. Most of the Latinx Student Union is Mexican, and Rivera said having a different Latinx perspective, especially an Afro-Latina one, is valuable.

“Even though we’re all a part of the same community, [there is] a greater anti-Blackness that is still in the Latinx community,” Rivera said. “We have all of these very iconic figures in our community, and they tend to lean towards lighter completions and more Eurocentric features, and not just features but ideas, whereas specifically the Afro-Latino population in our community [is] overlooked.”

Gaby Perez, a sophomore exploratory studies major and member of Latinx Student Union, said she was also impressed by the intersectionality Clemente’s visit would bring between the Latinx community and the Black Hub.

“The fact that she was invited through [the] Hub, through a different organization, is what caught my attention,” Perez said. “You would think that us at the Latinx Student Union would be the ones to invite [her]. It’s nice to see how different communities are actually getting together and supporting each other and growing united.”