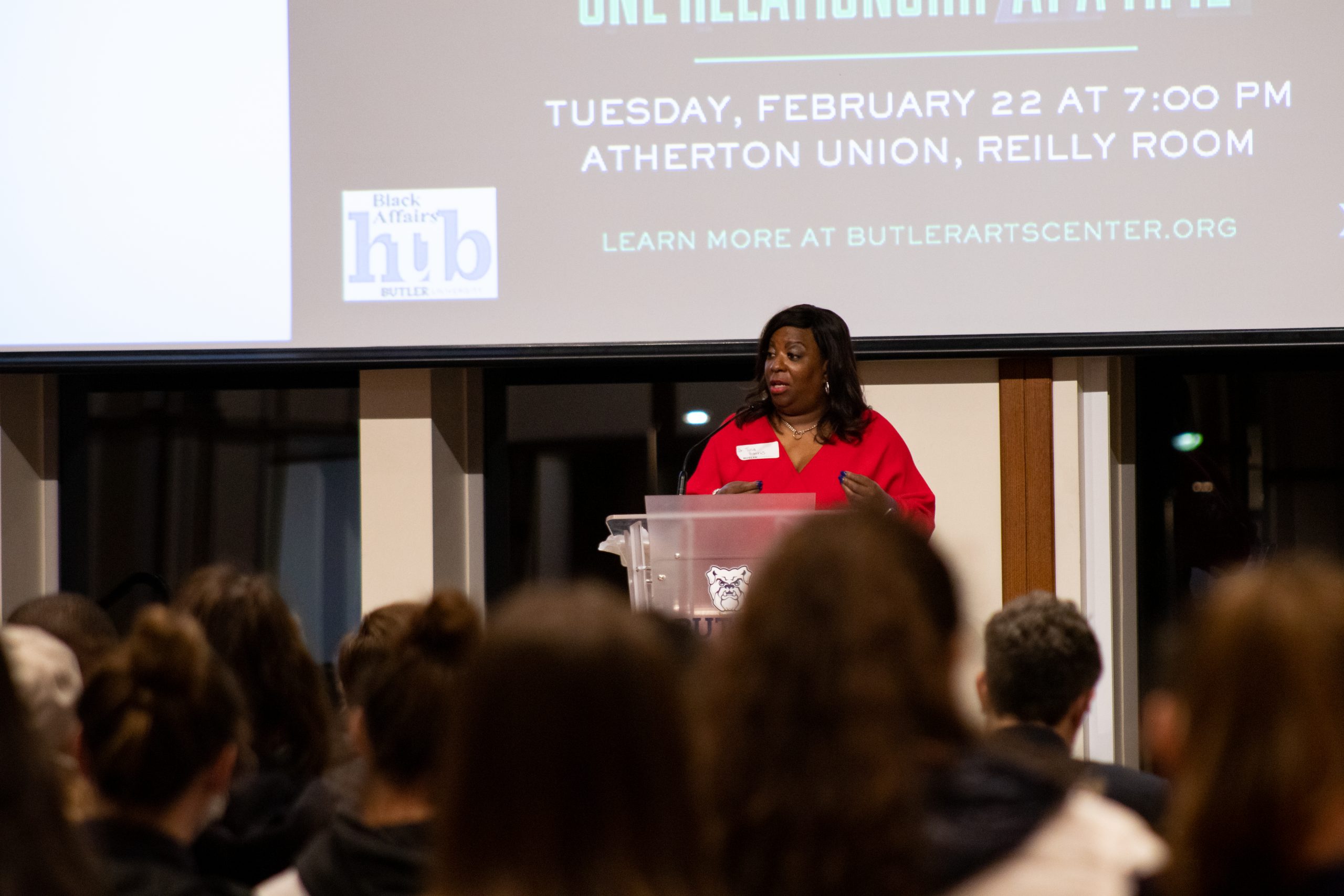 Dr. Tina Harris speaks on racism in the Riley room at Butler University. Harris’ new book, Dismantling Racism: One Relationship at a Time, identifies different relationships as necessary sites for tackling the difficult issue of race. Photo by Ben Caylor.

Dr. Tina Harris, author of the forthcoming book “Dismantling Racism: One Relationship at a Time,” spoke at Butler on Feb. 22 with the hope of inspiring students to think critically about their role in tearing down racist ideals and structures. Taking place during Black History Month, Harris’ event was part of the Butler’s Visiting Black Intellectual Series.

Although talking about racism with family, friends, significant others and colleagues can be difficult, Harris explains in her book how crucial those conversations are for challenging racism. Harris states it is imperative that everyone, no matter their race, is willing to take part in the process.

Lecturer of communication Eileen Taylor has worked to implement Diversity Equity and Inclusion within her assignments since 2017. Taylor said giving students the opportunity to demonstrate their perspective on DEI has been effective and enlightening in a classroom setting.

Excited to have Harris come speak at Butler, Taylor agrees that Harris’ theory of communication is the key to dismantling racism.

“Communication is part of building relationships and if we have a better understanding of communication as it relates to relationships, we may be able to make some movement even greater than we already have with racism, not just at Butler but in the world,” Taylor said.

Brooke Barnett, the interim provost and vice president for academic affairs, said when the university was discussing possible speakers, Harris was suggested because of the importance of her work along with her prolific writing and speaking skills.

The event was put on by the College of Communication and the Hub for Black Affairs.

“It’s easy for people who don’t have to deal with racism on a daily basis to ignore it, but because those issues make people uncomfortable, it is even more important that they are discussed and brought to the surface since racism is not something all people have the privilege to ignore,” Howell said.

In addition to her speech, Harris is also conducting a workshop for faculty and staff in Atherton Union 326 on Feb. 23 and a lunch workshop for students in the Ford Salon in Robertson Hall on Feb. 24.

Harris said she hopes people left her presentation educated and ready to have tough conversations to break down racial barriers.

“I hope [people] will walk away inspired, excited, energized and even more passionate about doing the dirty work when it comes to having these conversations [about racism],” Harris said. “I hope that people … [are] willing to sit down and have conversations with other people about what racism is, what’s diversity, and what that means. I think that people are quick to become defensive because they really don’t know what it means … So I just want us all to leave with not only an awareness but a commitment to do our part and we can do that through our relationships, one relationship at a time.”