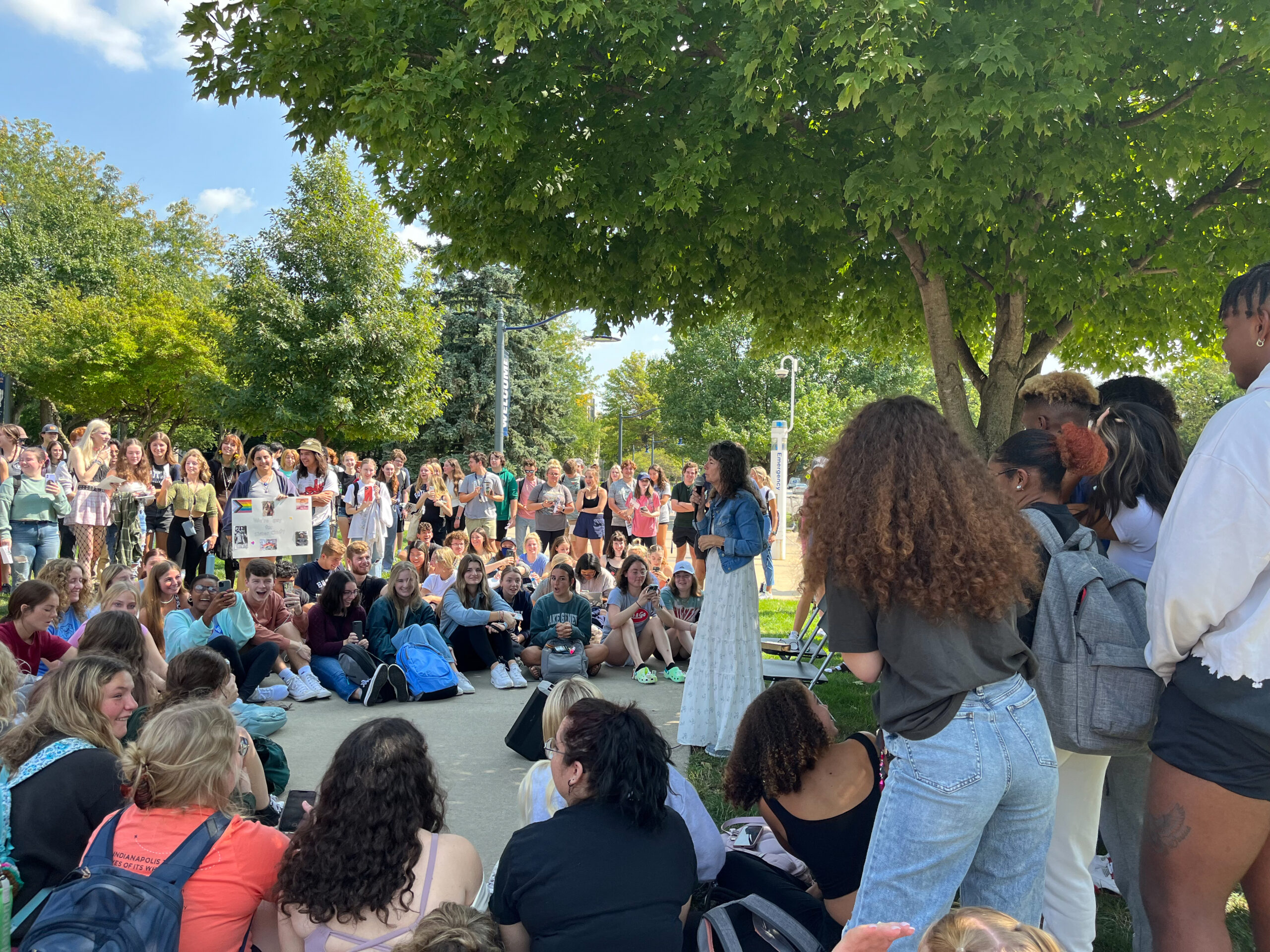 Sister Cindy is — in a word — infamous. With over 422,000 followers on Tiktok and nearly 16,000 on Instagram, her use of religion to publicly shame college students for their identities, clothing and sex lives has been well documented.

Moreover, despite the fact that none of her crowds actually seem to agree with her, she has been arguably well-received — considering her open opposition to the lifestyles and identities of pretty much everyone she meets, including people of every non-Christian faith, the LGBTQ+ community and any individual engaging in premarital sex. Yet at her tour locations, the hoards of student bodies overwhelmingly respond with joking cheers and eager listening.

But, for some people, even the most ironic of fans are feeding into a more serious problem.

Sophie Graham, a junior history/anthropology and classics double major, fears that any sort of engagement with Sister Cindy runs the risk of the integration of her ideology into students’ thought processes.

“If you’re not surrounded by it, or you’re not hearing that kind of a message on a regular basis, then it’s just not something that you think about,” Graham said. “Now that she’s saying these things, it is something for you to think about, even if you’re disagreeing with it. I think it can be dangerous for people who find themselves … on the moderate side of American politics right now.”

“By playing along, even ironically, with her farcical performances, we allow her to promote a message that in my view runs counter to ideals of love, tolerance, acceptance and freedom,” Bauman said in an email. “Balancing such ideals against the ideal of free speech is therefore always a difficult and delicate matter.”

With many members of the Butler community sharing these sentiments, it was only appropriate for Butler to reaffirm their views with a meaningful address of the issue. So, in response to her hotly anticipated arrival, the ever-so-gallant Butler University protected their student body by placing signs warning of an “exercise of free speech.”

Let’s dig into what free speech entails, shall we?

Sister Cindy gave her speech on the sidewalk, which is public property. And — in a not-so-shocking turn of events — there are no laws against hate speech from a state or federal level. So she absolutely has legal grounds to tell as many teenagers that they’re going to Hell as her heart desires.

However, Butler’s response still felt strange. Don’t get me wrong, I don’t think it’s productive to shield an audience of adults from the harsh realities of the world entirely. But I feel that Butler has some power to compassionately remind its students that it upholds certain values that inherently clash with Sister Cindy’s message. The sign in particular irked me as its reminder that engagement had to be respectful seemed to imply that the only potential for inappropriate or harmful speech would be from the student body. After all, Butler did not include any recommendations for Sister Cindy — or whatever other speakers are warranting that signage — to engage respectfully with their free speech, so why are students being preemptively reprimanded for getting justly offended?

“I think that if Butler wanted to, they absolutely could make a statement condemning any sort of hate speech and promoting making campus safe for everyone,” Graham said. “To have those kinds of thoughts validated can make a potentially unsafe environment for people, and that’s not what college should be.”

Now, my dear readers, I would never write an article about someone without going to the source herself. As we all know, the opinion section is a strictly unbiased, news-centered category, and I feel the utmost responsibility to uphold that. So I took my questions about the phenomenon that is Sister Cindy to the woman herself: Cindy Smock.

It feels incredibly important to note here that this was a remarkably civil, even caring conversation. Do I feel that this had to do with the fact that I was dressed fairly conservatively and look like every straight white Christian you’ve ever met? Very much so. But still.

In our conversation, Smock confirmed that her character of Sister Cindy was, in fact, satire. When I asked her why she jumped to such extremes to share her faith, she told me that it was an effective way to garner the attention of crowds.

“I’m trying to get them to listen, and they listened for two hours [today],” Smock said.

And while Sister Cindy does always draw a crowd that admittedly pays strong attention to all of her message, the lack of conviction behind what she says is evident through her growing interest in branding and commercializing with merch ranging from buttons to Bibles. Sure, she likely has some sort of earnest agenda regarding the salvific portions of her ideology, but it is quickly conflated with the satirical and inflammatory statements that she openly admits are made just to elicit a response.

“Either she is just trying to build up her retirement fund through social media revenue, or she is engaged in one of the most nonsensical, counterproductive projects of all time,” Dr. Bauman said.

Smock, however, said that she felt that her work dealt heavily with the ideals of free speech and, in conjunction with their religious messaging, spoke to the greater condition of individual liberties.

Although I walked away from this conversation pleasantly surprised to see the person behind the facade, I also left with an even greater conviction that her approach and overall message of shame is absolutely wrong. After all, it was her abrupt and intolerant yelling that had me on the verge of naming this piece “Sister, shut up,” and it is only through earnest conversation that I have so graciously decided to change my mind.

Free speech is a valuable and precious thing — on that point I’m sure we can all agree. But when you’re using that right to prey on marginalized groups to sell “ho no mo” shirts, you open yourself up to the free speech of teenage opinion writers who think that your work is worthy of criticism. And, with that in mind, perhaps we could all learn to use our free speech a little more wisely.