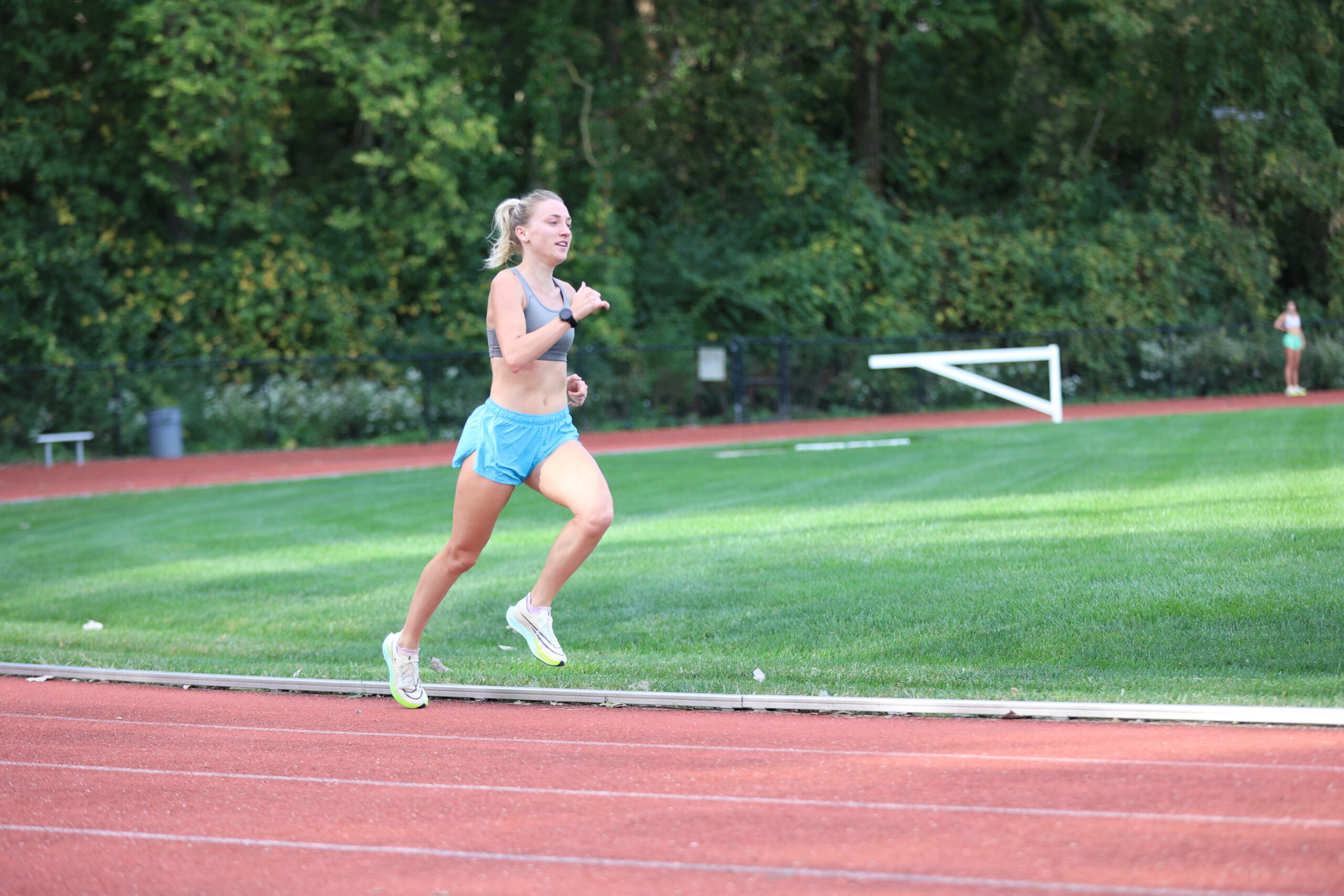 Mia Beckham runs on the outdoor track at Butler University during practice. Photo by Claire Runkel.

In her last season on Butler’s cross country team, redshirt senior Mia Beckham will use her experience and confidence to fearlessly cross her final finish line.

On Sept. 20, Beckham was named Big East female athlete of the week following her first place finish in the Redbird Invitational. She crossed the line 16 seconds in front of the second place runner with a final time of 21:16.5.

Beckham grew up in Warsaw, Indiana and graduated from Warsaw Community High School in 2018. While in high school, she earned four-varsity letters, was a two-time cross country conference champion and was the seventh-place finisher at the 2017 Indiana Girls Track and Field State Championships. Beckham chose Butler, because she wanted to compete in cross country and track and field at the Division I level.

Her first season of cross country at Butler ended with a 35th place finish at her first Big East Championship. Her second year brought on bigger competition at the NCAA Great Lakes Regional where she placed 113th with a time of 23:04.5.

Mental toughness is a quality that benefits cross country runners in a way unlike other sports. A runner guides themself through the course and powers to the finish line with their mental strength along with their body. Beckham demonstrates how a runner can use this strength to contribute to her abilities on the course. She stressed how the power of confidence through repetition is important.

“It’s not easy every day, running, waking up and doing the same process over and over again, running 10 miles a day, and then seven days a week on top of each other,” Beckham said.

Despite the difficulties of repetition, Beckham’s confidence stems from her workouts and mentality that she is strong enough to compete.

When Beckham first began at Butler, she struggled with adapting to the tough mental aspect of the sport on the collegiate level.

Once her junior year hit, Beckham’s confidence began to click.

“I finally realized once I do everything like the best I can, I’ll have confidence,” Beckham said. “That’s what truly made me a stronger and better runner, mentally knowing that I have had that training under my belt, and I have confidence in myself and my ability. All I need to do is just put it to the test and race.”

In her 2020-21 junior season, Beckham placed 10th at the Lipscomb Winter XC Classic and took 12th place at the Big East Championships, a testament of her improvement.

Throughout Beckham’s career, she has been able to rely on the support of her teammate and sister. Senior Remi Beckham — a member of the Butler track and field team — lives just down the hall from her sister in their house. Although Remi and Mia compete in separate events and distances, they train together, and their relationship has only grown through their bond as teammates.

“Because even though our teams are separate, having that same track team in general has definitely grown us closer … it’s just kind of like this other level of running for another person,” Remi said.

In addition to Remi, her other family members — her mother, father and sister Adree — have supported her through her training and in competition. Hearing their cheers at the end of the finish line spark the final push she needs. Beckham’s family has also taught her the leadership style she admires and now uses as a leader amongst her teammates.

“My more preferred leadership style is leading by example and just setting a good example to everyone, because you don’t have to be assertive in that way,” Beckham said. “If I have to be assertive, I will, but I’d much rather just show everyone [than] to tell them what to do.”

Her teammates recognize and praise her style of leadership at practice and in competition. Redshirt sophomore Abby Olson has been a teammate of Beckham for three years now. Through training, the two have become closer, and Beckham is someone Olson looks up to.

“She’s a great role model in terms of what we’re supposed to be doing,” Olson said. “Our movements and practice and even through how strong she is, workouts and everything, it’s great to see her up ahead of me in a workout or ahead of me in the race. She always knows exactly what to do when she’s moving through a race or workout.”

Coach Matt Roe has led both Butler’s track and field and cross country teams for the past 15 seasons. He is a 12 time conference coach of the year and was a finalist for NCAA Division I coach of the year in 2013 — a testament to his consistent leadership.

Roe has developed and produced 34 NCAA individual finalists and 34 All Americans. He has coached many elite runners, and Beckham is no exception.

“Mia has grown tremendously as a runner and a leader,” Roe said. “She has improved in both her physical and mental abilities throughout her career here at Butler. The mental aspect of running is tough. Running hurts. It’s getting past that, [that’s what] makes her strong.”

In her final season at Butler, Beckham said she wants to have no regrets after she runs her last race. In addition to her personal goals, the Big East Championship lingers in the back of her mind.

“This is my last cross country season ever, so just being fearless in my racing … and acknowledging how hard I’ve worked to get here [is important to me],” Beckham said. “It’s been so many years, so many miles. That’s kind of been my thing this season. This is my last year here. Why not? Why would I not try to go for it?”