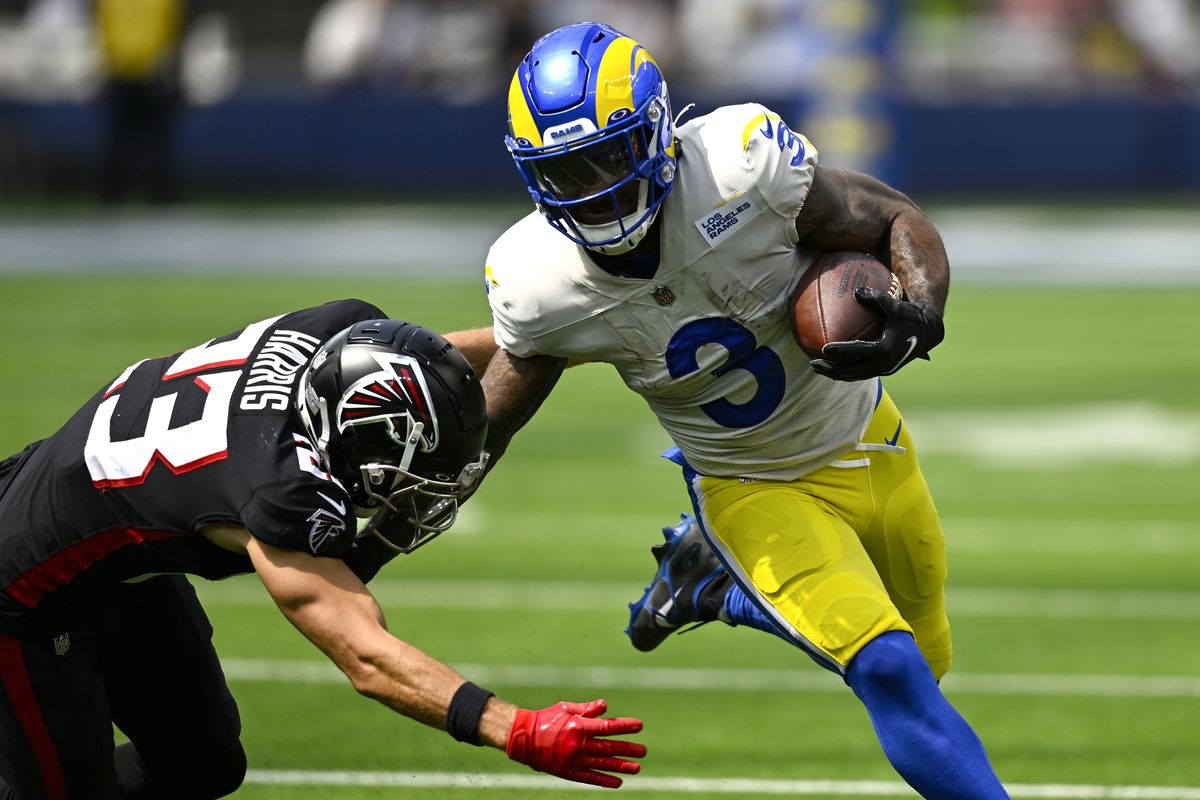 Cam Akers sheds a tackle in the Rams’ week two win over the Falcons. Photo courtesy of John McCoy/Getty Images.

Week three saw the end of the streak of an AFC division going winless. We do have two teams seeking their first wins and two teams that are undefeated. Hopefully, your fantasy team has fared better than the Texans and the Raiders so far. Here are the players to start and sit in your matchups this week.

Start: Russell Wilson, Denver Broncos. The early returns on Wilson have not been pretty. With two touchdowns and one interception on the year, Wilson has not been able to adjust to his new team after he said, “Broncos Country, Let’s Ride!” As a result, the Broncos have been putrid offensively and have yet to score more than 16 points in a game. However, this is the week the breakout will happen. The Broncos face the 0-3 Raiders, who have allowed every QB they have faced so far to pass for at least 250 yards. They have also struggled to pressure the QB with only two sacks through the first three games. You can book it that Wilson will have at least 20 fantasy points as the Raiders will continue their struggles to begin the season.

Sit: Matthew Stafford, Los Angeles Rams. The Rams are off to a solid 2-1 start on the year and Stafford has played a role in their success with consistent QB play. However, I would steer clear of Stafford in this matchup against the Niners. Their defense has allowed the fewest passing yards with 148.3 yards per game and will be at home. The Niners have been able to get to the QB with eight sacks on the year and should be able to get in Stafford’s face in this one. This could easily be a multiple interception game for Stafford and yet the Rams might still win the game due to Jimmy Garoppolo. As a bonus tip, you should not be starting Garoppolo in any leagues especially after he stepped out of the back of the endzone last week.

Start: Jamaal Williams, Detroit Lions. After D’Andre Swift was forced to exit the game against the Vikings, Williams took over and had 20 carries for 87 yards and two touchdowns. A similar volume should be there again after what Cordarrelle Patterson just did to the Seahawks. The Seahawks have allowed the third most points per game to opposing running backs. With Swift still yet to practice this week, it is not looking good for him to potentially play this weekend. Plug Williams into your lineup and watch the points pile up.

Sit: Cam Akers, Los Angeles Rams. The Rams seem to have figured out their backfield with Akers getting the majority of the early-down touches. He has a combined 27 carries in the last two games, but is not seeing lots of yardage out of those carries. Unfortunately, he is also not running many routes at this point and this is a true boom or bust situation against the Niners. I would be staying away from starting Akers until we are able to see him consistently clearing double-digit fantasy points and putting up more yards on the ground.

Start: DJ Moore, Carolina Panthers. Last week against the Saints, Moore was targeted six times, but only caught one pass. There has not been any chemistry between him and Baker Mayfield yet which has explained Moore’s seven catches on the year. Sunday’s matchup with the Cardinals will be the game where Moore will finally have a breakout game. We saw what happened when the Falcons started finding Kyle Pitts and now Mayfield should have plenty of opportunities with Moore’s talent against the Cardinals secondary that is particularly vulnerable on the outside.

Sit: JuJu Smith-Schuster, Kansas City Chiefs. Smith-Schuster is second on the team in targets and yardage and is coming off five catches for 89 yards in the surprising loss to the Colts. Normally, this might be a reason to start someone, but not so fast my friends. The Buccaneers are also coming off a home loss to the Packers and their defense held strong for the most part. We will see a defensive game where Patrick Mahomes will be forced to make plays with his legs. The Chiefs love to move Smith-Schuster around the field but do not be surprised to see the Bucs defense paying special attention to him to prevent the big plays.

Start: Darren Waller, Las Vegas Raiders. With Waller’s size, he is able to win matchups and go up and get the football. He has been consistent this year, with the Titans game as the only outlier to his strong start. This week at Denver will be a challenge with the Broncos’ cornerbacks being a focal point of their defense. Outside of them, he will easily win the matchups with the Broncos linebackers who will not be able to cover him at all. The Raiders must get something going eventually and the best way to start would be to keep targeting Davante Adams and Waller.

Sit: Logan Thomas, Washington Commanders. Just as Thomas looked to be getting back to his previous form after coming back from an ACL tear, he had five yards on the day against the Eagles. If you are one of the fantasy players that streams your TE’s, this is the week to avoid Thomas. He is fifth on the team with an 11.0 target share and is behind all three of his WR teammates and the Commanders passing-down back J.D. McKissic. Carson Wentz has had three straight weeks of 40 passing attempts, but not enough of them are targeting Thomas. This might be a wait-and-see approach.

Start: Evan McPherson, Cincinnati Bengals. McPherson has had two uncharacteristic missed field goals early on. You should not expect that to continue as he missed five field goals all of last season and is one of the elite kickers in the NFL. The Bengals have an explosive offense and McPherson will have plenty of chances with extra points and field goals. With a career-long FG of 59 yards, he can be a sneakily important part of your fantasy team when he is making those types of kicks.

Sit: Riley Patterson, Jacksonville Jaguars. This is nothing against Patterson who has only missed one field goal on the season. It is more about the Jaguars’ opponent this week. The Eagles have allowed the least amount of points to kickers this year. Since week one, the Eagles have allowed 15 points. While I do not expect the Jaguars to get held to single digits, I would not expect them to be able to get Patterson involved in this one.

Start: Packers Defense/Special Teams: The Packers will be home against the Patriots and with Mac Jones out of action for the next few games, the Packers defense could feast. The Patriots will be forced to turn to Brian Hoyer behind center. Hoyer has not started a game since 2020. The Packers should be the highest-scoring defense this week.

Sit: Saints Defense/Special Teams: The Saints had a respectable six points against the Panthers and should have had more. This week against the Vikings is going to be a challenge. We still have not seen the Saints’ defense have a strong game and they do not have an interception on the year. I would hold off on starting the Saints until week five against Seattle. There are better streaming options available.