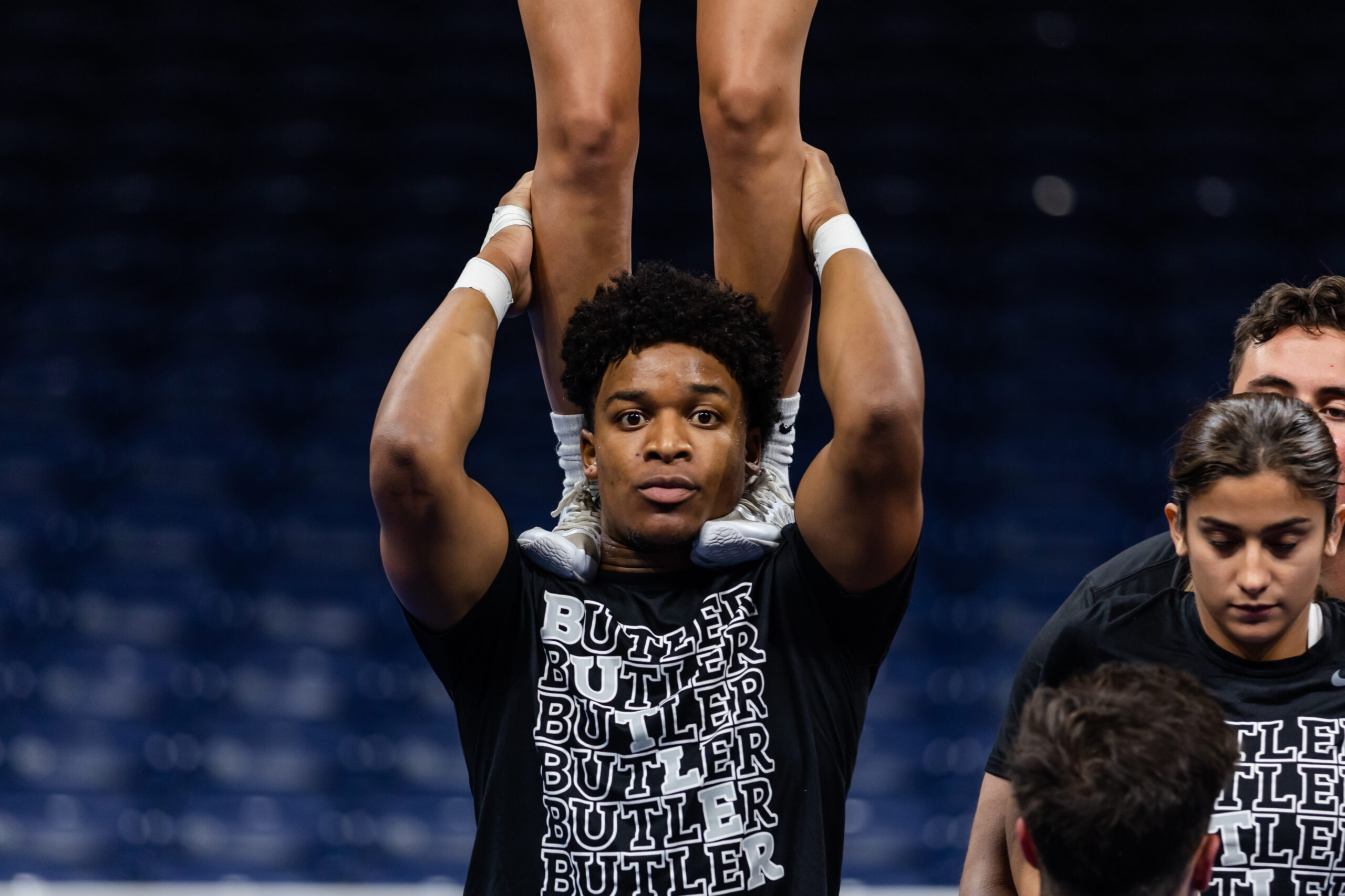 Junior Kellen Newman holds a teammate on his shoulders during a practice. Photo by Lauren Hough.

When you create the image of a cheerleader in your head, what usually comes to mind? Most people would visualize a white “female who is small in stature yet feminine; adheres to westernized notions of beauty; has long, often blonde hair that manages not to interfere with her athleticism … ”

From the outside looking in, it may seem like only women can be cheerleaders. Being a man in the sport comes with well-known sexist and homophobic stereotypes. Despite the typecast that may be thrown their way, three men cheerleaders at Butler are showing that the sport is for everyone.

Nate Corrales, Kellen Newman and Noah Lipscomb are all members of the Butler co-ed cheer team, each with unique stories about how they joined the team. Corrales, a senior applied business technology major, is entering his third season cheering for the Bulldogs. He was invited by fellow teammate Mattie Neely to come to an open gym during his sophomore year.

“I didn’t really think anything of it [at first],” Corrales said. “We have a mutual friend … and I went and watched her cheer. I thought it was so cool. I was like, ‘It’s beautiful, but it’s also kind of brute.’”

For Newman and Lipscomb, this is their first season. Newman, a junior entrepreneurship and innovation major, said he has always wanted to pursue cheer.

“I felt like there was no better time than college to just finally go for my dream,” Newman said. “So I tried out as a junior, and now I’m here, and I’m in love with it. It’s such a thrill. It’s such a drive; it’s the competitive nature that I’ve been missing. But it’s like competing with yourself.”

Lipscomb is the youngest of the three, a first-year elementary education major. Like Corrales, he was recruited by someone on the team, only that someone was a coach who happened to work at his high school.

“Cole Bonewit, he’s the assistant coach here, and he also works at my [high] school,” Lipscomb said. “He knew that I was a wrestler …  and he thought I was physically able to try out, so I came down and gave it a shot. Tryouts [were] the first time I had ever cheered. I guess I showed [them] something that they like, so they asked me to come back, and I’ve been coming back ever since.”

Lipscomb mentioned that it is common for athletes from other sports to be good at cheerleading. Newman, who in high school was a tri-sport athlete in football, track and lacrosse, shared the same sentiment.

“[Cheer] is a bunch of little things that add up perfectly,” Newman said. “And I think playing other sports, it’s very different, but at the same time it all plays into the same [thing]. If you have the mindset, you will succeed.”

Senior Nate Corrales is in his third season on the Butler cheer team. Photo by Lauren Hough.

Corrales doesn’t have an athletic background like the others, but credits the time he took off from school as what helped him ease into the sport.

“That was a really big shift for me,” Corrales said. “I was an artsy kid growing up. I would say before college, during my gap year, I learned about being detail oriented and how things take a long time to become great. You got to worry about the little details … that’s how you get better, and that’s how you keep pushing.”

The grind of a cheerleader is real. Continuous work goes on behind the scenes in practices, and it is all business. But as all three agreed: game days make everything worth it.

“Game days are absolutely the best,” Corrales said. “I think during practice, it’s very much so business. It’s ‘let’s hit stunts, let’s progress.’ But when it comes to game day, everybody’s happy face comes out. We’re just out there having a good time.”

Lipscomb’s first experience of a game day came recently at the Butler football game vs. St. Thomas on Sept. 3. He says that seeing the role of cheerleading from this side of the field was eye-opening to him.

“I didn’t realize how big of a role that cheerleaders do play in the overall morale of the game,” Lipscomb said. “It’s our job to not just to stunt and throw people up and catch them and all that stuff. It’s also to improve the morale of our fans so that our team has something to play for.”

One of the aforementioned stereotypes that are associated with being a man cheerleader is that if you cheer, you have to be gay. Being blanketed as a monolith is something that not just men cheerleaders face on a daily basis, it’s what BIPOC — Black, indigenous and people of color — also face day after day. It’s something that many people saw highlighted with La’Darius Marshall in the popular Netflix original series “Cheer”.

Corrales, Newman and Lipscomb are all men of color. Though they haven’t faced any obstacles directly regarding their race or sexual orientation at Butler, they still acknowledge the work that needs to be done in educating others that the cheer community is a diverse one.

Corrales, who identifies as heterosexual, admitted that when he tells people he cheers, some are a bit surprised.

“I’ve heard [people say] before that cheer is a great sport for men who are homosexual because they feel like they have a place like where they strive and are comfortable,” Corrales said. “Yeah, I’m all for that. I also don’t think [cheer being a place just for gay men] is the entirety of co-ed cheer.”

Lipscomb seconded that, saying that some people haven’t taken him seriously or have believed he’s just there to be around the women cheerleaders.

“I’ve gotten a few of those slight comments,” Lipscomb said. “I’m not coming here for any other reason but to hit these stunts … I’m not here, just to kick it with you and chill. We can have fun and stuff without letting that get in the way of the task at hand, which is: I’m here to cheer. I’m not here for anything else..”

Newman, who identifies as homosexual, echoed the “I’m here to cheer” mindset and feels like the team has never made his sexual orientation into a big deal.

“I never feel like [my sexual orientation is] something that matters,” Newman said. “At the end of the day, it’s like, ‘Are you gonna get that girl up to the top of the stunt or nah?’ Like, there’s no sense of black, white, gay, it doesn’t matter. It’s about ‘Can you do your job?’”

While men cheerleaders have slowly become more accepted and praised, it is still a laborious task. Cole Bonewit, assistant coach of the Butler cheer team and the person who recruited Lipscomb to the team, exhausts every possible outlet that is at his disposal when it comes to getting guys to come try out.

Traveling to talk at local high schools, recruiting students at his own school, posting about open gyms on social media, and sending emails out to fraternities at Butler are just a few of the methods he uses.

A cheerleader himself when he attended Ball State University, he understands some of the stereotypes that Corrales, Newman and Lipscomb are facing right now. He hopes the work he does is slowly but surely making it easier for the next generation of men cheerleaders.

“I think we’re moving in the right direction,” Bonewit said. “I think there’s a lot of stereotypes out there about cheerleaders and [male] cheerleaders, and it’s always been my goal to crush those. Ever since I got started cheering in college, I would get those stereotypes from people. And even as a teacher [at Lawrence Township], working with high school students, I think you hear a lot more of them. So I always am trying to crush those stereotypes and change the culture of cheerleading, change the culture for [men].”

When thinking about what to say to someone interested in becoming a cheerleader, Lipscomb advises to never throw away a free opportunity.

“If you told me even four months from this day … that I would be in the position I am right now, I wouldn’t believe you,” Lipscomb said. “So I just believe, and this is something that I’ve always lived by, [to] never close an open door. Always walk through it. Never turn down an opportunity to do something because you never know where it could take you.”