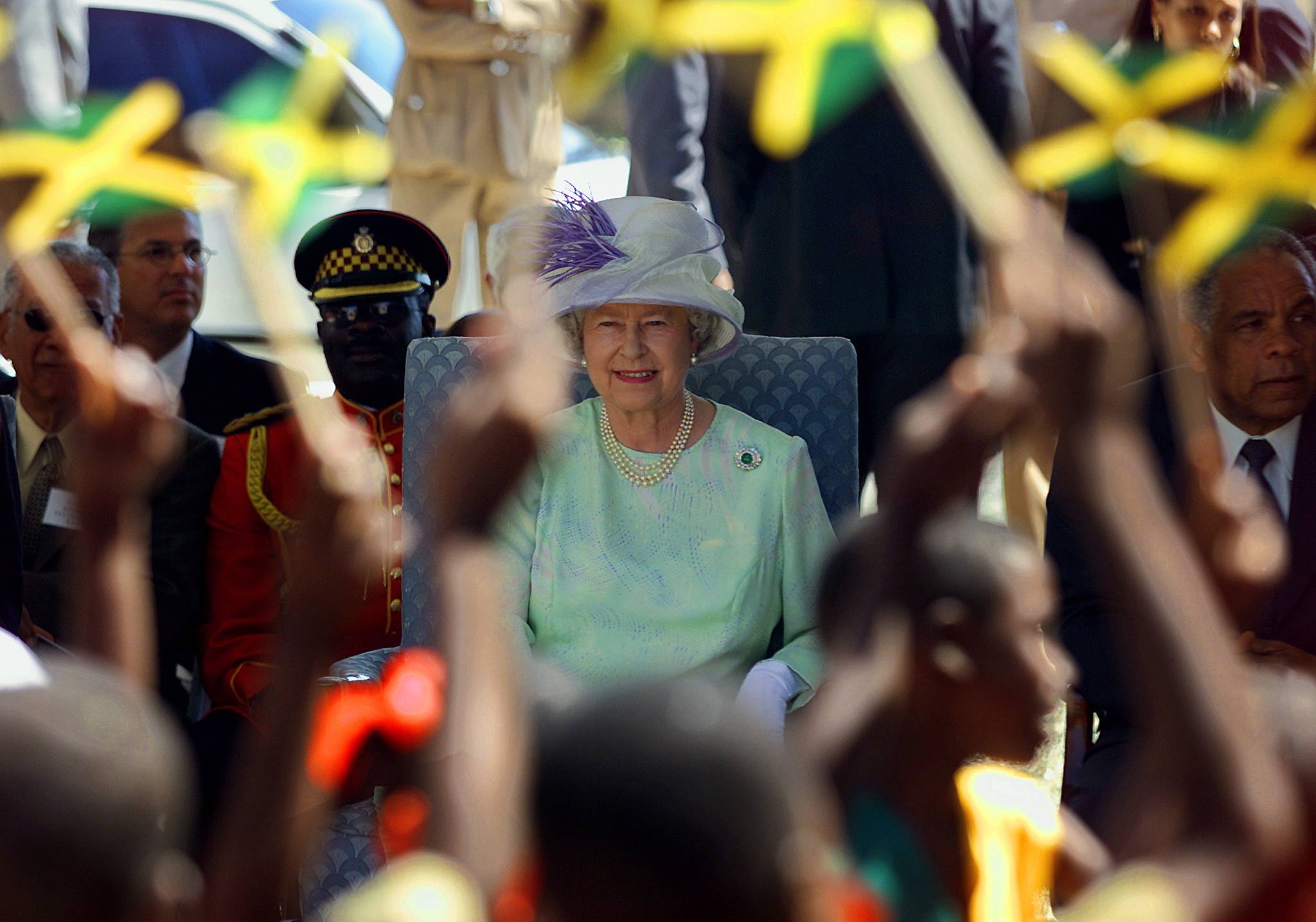 In the wake of Queen Elizabeth II’s death, many have reflected upon the significance — or lack thereof — of the British royal family as a wrongfully romanticized relic of imperialism past and present. Examining the widespread worship of ceremonial figureheads through a decolonial lens presents plenty of opportunities for due criticism and solemn consideration of those impacted by the wounds of British colonialism — both of which deserve to be expressed freely.

“My grandparents on my mom’s side, they were actually born in India as a British colony, and they were the white people [there],” Young said. “My grandparents would tell stories about their lives [there], and they would tell [my family] that they would have [Indian] nannies who would sleep outside on the patio at night. They would have [Indian] cooks and servants, and they went to boarding school for mostly rich white people.”

For those who trace their family lines to colonized countries or members of the Commonwealth, themes of erasure and removal commonly persist. While indigenous heritage is often erased, iconography and allusions to the imposed sovereignty of the British monarchy become routine and established as the new historical and cultural norm in stolen lands, one such example being the occupation of India as a British colony from 1858 to 1947.

“I am 25% Indian, and my great uncle also took a DNA test, and he’s like 50% Indian,” Young said. “But [my grandparents] kind of just covered it up, and I have no trace of [that part of my family’s culture]. I only have traces of the white people.”

Many imperial powers are integrally and irrevocably intertwined with ideals of white supremacy and white hegemony as mono-racial national identities, specifically as it pertains to their goals of colonizing predominantly non-white countries. As was the case with the British occupation of India, the curated ideal of “Britishness” that the monarchy represents is bolstered by centuries of the defense of whiteness as an unmarred national identity in the face of persecution.

Dr. Mira Assaf Kafantaris, an assistant professor of English at Butler, detailed the idealized reality of monarchy as a mechanism of white power.

“I study the fiction of royalty, and I think [the British royal family is] representative of an institution that got enriched through slavery and colonialism and genocide and is still partaking in it,” Kafantaris said. “I really do not like this idea of ‘Englishness.’ I say ‘Englishness’ because it harks back to the fantasy of a white England: of the Great British Bake Off, of the gardens and the tea and the scones and of nice ladies and this English heritage of cultural capital — it’s power.”

The countries of the British Commonwealth, the political association composed primarily of former British colonies, encompass just over a fifth of the world’s landmass and over a third of the global population. Of these countries, fifteen, including the United Kingdom, remain under the dominion of the British crown.

Queen Elizabeth II oversaw genocides against indigenous people around the world, the effects of which are still felt in countries that remain under the control of the monarchy. In Canada, the legacy of colonialism is felt by indigenous women who are disproportionately made the victims of violent crime.  In New Zealand, indigenous children are overrepresented in state care. In the Carribean and West African countries, the legacy of the Transatlantic slave trade, in which the British monarchy had a foundational role, has left those regions impoverished.

Young establishes that her grandparents are living proof of the recent history of British colonization.

“My grandparents lived in British colonies [in India], and they’re still alive.” Young said. “People are like, ‘Oh no, like colonizing doesn’t really happen anymore,’ but it still does. It definitely still is affecting people.”

Kafantaris concurred with Young and felt that this moment in history presents an opportunity for the United States to reckon with its own history of imperialism through solidarity with victims of British colonialism.

“If we feel that [the British Empire] that is built on slavery and land extraction and still is — it’s not something that stopped, the after effects are still ongoing … what and who are we aligning with?” Kafantaris said. “What does it mean that we choose to align with such an institution, and where are our politics of solidarity? … What does it say about our commitment to abolition and anti-racism and decoloniality?”

Even nations that are no longer Commonwealth realms feel the lasting effects of British colonialism as well. Throughout Queen Elizabeth’s reign, several nations, including Ireland, South Africa and India, rightfully divorced themselves from British sovereignty. Many of these nations have histories of colonial violence from the direction of the British crown.

“I was a little kid learning about the British government and British military occupation of Ireland when … my great grandmother was growing up there,” Quinn said. “[Because of that history] I don’t think there’s really any love lost when a member of the monarchy dies.”

Following her death, many have condemned the queen as a figurehead for numerous imperialist atrocities, and some have engaged in outright celebration. Even as citizens of the United States respond to the news heard across the pond, some have been punished for speaking out — as is their right — in favor of liberation and justice.

Uja Anya, assistant professor of Second Language Acquisition studies at Carnegie Mellon University, took to her personal Twitter account — prefaced with the disclaimer “views are mine” and no mention of her place of employment — to express her personal feelings of justice and retribution regarding the queen’s death. As the post, which condemned the glorification of the queen’s sanitized memory following her passing, grew in viral acclaim, Anya was not only dogpiled by billionaire Jeff Bezos, but publicly admonished by her own employers at Carnegie Mellon in a public statement decrying her comments as “offensive and objectionable.” Anya’s tweet was later removed for violations of Twitter’s community guidelines.

Anya and her family are survivors of British imperialist genocide in Africa, and she presents her own lived experience as antithetical to the aims of colonial powers that attempt to silence dissenters under their rule. The vitriol and public disfavor administered to her merely for speaking out regarding the violent impacts of the British monarchy on her own family represents the tone policing that governs the words of people of color in resistance to their oppression — past and present. Anya’s peers and allies have responded in defense of her freedom of speech with a petition and corresponding letter — one such defender being Dr. Kafantaris, who signed the petition alongside other Butler faculty members.

“Do not punish us for presenting the idea that now is not the time to talk about the injustices of the public figure of the queen as if [they] do not exist within [her] power structure,” Kafantaris said. “Like, [pro-monarchists say] ‘there’s a time to mourn, and there’s a time to talk about coloniality as [a] performance of state power,’ which is impossible to kind of pick and choose. [They say], ‘Now is not the time.’ It’s always not ‘the time,’ and if you speak out most probably you’re going to be seen as somebody who is not civil and obeying respectability politics.”

While people of color globally react to the death of a ruler who remained dedicated to racial discrimination — even in her own household, national mourning procedures in the United Kingdom mark a period of devastating pause as a number of public and private services shut down in the queen’s honor at the expense of her people.

England’s National Health Service canceled thousands of medical appointments for Sept. 19 — declared a national bank holiday due to the event of the queen’s funeral — amidst understaffing due to COVID-19 and Brexit and delays related to post-pandemic recovery of a weary system. Wimbledon Food Bank only reopened after announcing their planned closure on the day of the queen’s funeral due to a public outpouring of volunteer support. Funeral parlors in the UK have announced closures for formerly arranged services during the mourning period. In the face of economic strain and rising costs of living, these mourning procedures will negatively impact the lives of many British people who are rightfully reluctant to celebrate the life of a ceremonial monarch.

“[The royal family is] living a life of plenty,” Kafantaris said. “Especially [now] that the UK is now in a very bad financial place, people will not have heat, will not have food, and people at the most marginalized are going to be the most affected in the context of extreme kind of social collapse.”

Against the massive system that is colonial oppression, the voices of people of color are often silenced and stigmatized as uncouth or unimportant. At Butler as well as abroad, individuals affected by the devastation of imperialist violence by the hand of the British monarchy are defending the validity and necessity of their words — and we, for one, can’t wait to listen.