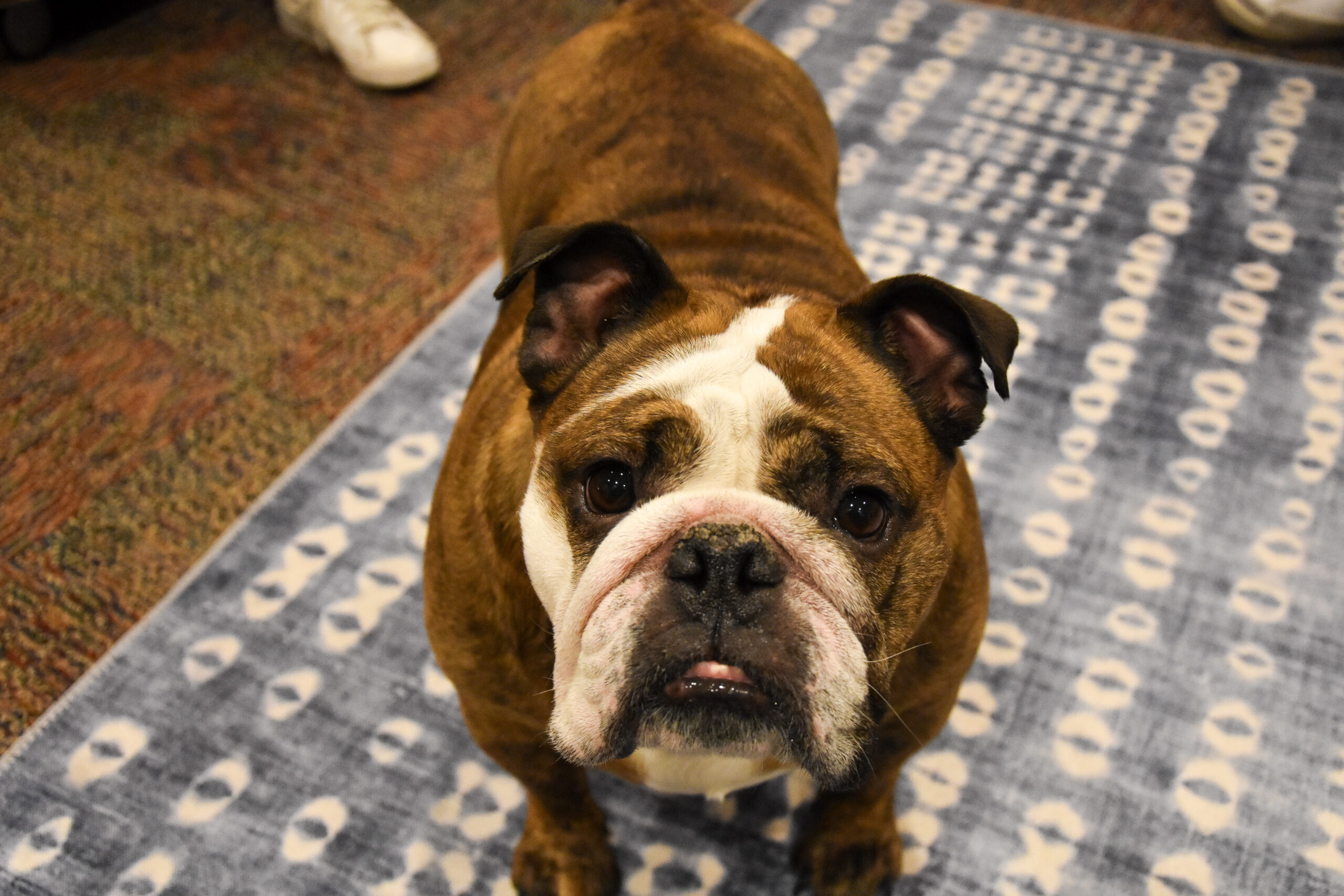 Bella the bulldog is the newest addition to the CCS staff. Photo by Jada Gangazha.

Counseling and Consultation Services, CCS, introduced a new furry friend this past summer, Bella the bulldog. Bella is a 6-year-old English Bulldog who joined ​​Scooter, the 3-year-old Cavachon, as a second therapy dog available to students.

Christine Kiray, assistant director of CCS, adopted Bella two years ago while she was living in Chicago. Kiray felt it was love at first sight when she found Bella and knew she had to adopt her.

Bella needed to pass her Canine Good Citizen test in order to be a part of the animal-assisted therapy program. After getting CCS’s approval, Kiray and Bella went through the eight-month-long training process, which ended in Bella passing her exam with flying colors.  Ever since this summer, Bella has been working alongside Scooter.

After her months of schooling, Bella now spends her days in the CCS office and joins students for therapy sessions.

“She’s great around students,” Kiray said. “ … she loves getting pet. She’ll jump up on the couch during sessions with students and snuggle next to them.”

Kiray said Bella loves to run around and see people in the office, but she also has a sneaky and mischievous side to her.

“She has an alter ego named Marge,” Kiray said. “Marge is when she gets a little bit rambunctious. She likes to play with all of Scooter’s toys … she will run into his office and eat his food and steal his toys, so that is when Marge comes out.”

When Bella is not stealing Scooter’s toys or food, she is helping students at group or individual therapy sessions. Part of her role is attending the weekly Scooter and Friends sessions.

Scooter and Friends is an open group available to all students who want to get a moment away from the craziness of college, or who just need to pet a dog for a bit. This group meets every Wednesday from 12:00 p.m. to 12:50 p.m. in room 120 in the counseling office at the HRC.

During the group sessions, toys and blankets are laid out, and students have the chance to play and snuggle with Bella and Scooter. Kiray said the 50-minute sessions serve as a break for students and an escape from the stressors that might be affecting them.

Sophomore exploratory major Hannah Baer began attending the Scooter and Friends sessions this semester. Baer said she heard about it through a post on Scooter’s Instagram and showed up one day.

“I get to hang out with Scooter, and then Bella” Baer said. “They’re the sweetest things ever. It’s really cool.”

Scooter and Bella have also been making their presence known at various outreach events. Both dogs have matching strollers they take around campus.

“We’ll go around with their strollers and people light up when they see Bella, not expecting a dog in the stroller,” Kiray said. “She’s just all wrinkly and pretty cute … it’s really nice to see people light up and [hear] people say, ‘Oh that made my day … I needed this today.’”

“First of all, it’s good branding because our mascot is the bulldog … ” Sikes said. “I also think animals are very good for therapy in general because they listen and give you a moment to breathe.”

Baer said students can go visit the dogs if they are having a rough day to feel like they have a part of their home here at Butler, and having dogs available at CCS for this purpose is a great resource.

“We are so busy, and we have a lot of intense things that we’re navigating and dealing with on a day-to-day basis,” Kiray said. “It’s important for students … to have a moment to relax and laugh at [Bella].”

Kiray wanted to highlight the importance of animals in connection with the morale of students. Kiray said that animals will always be there to love you and make you smile.