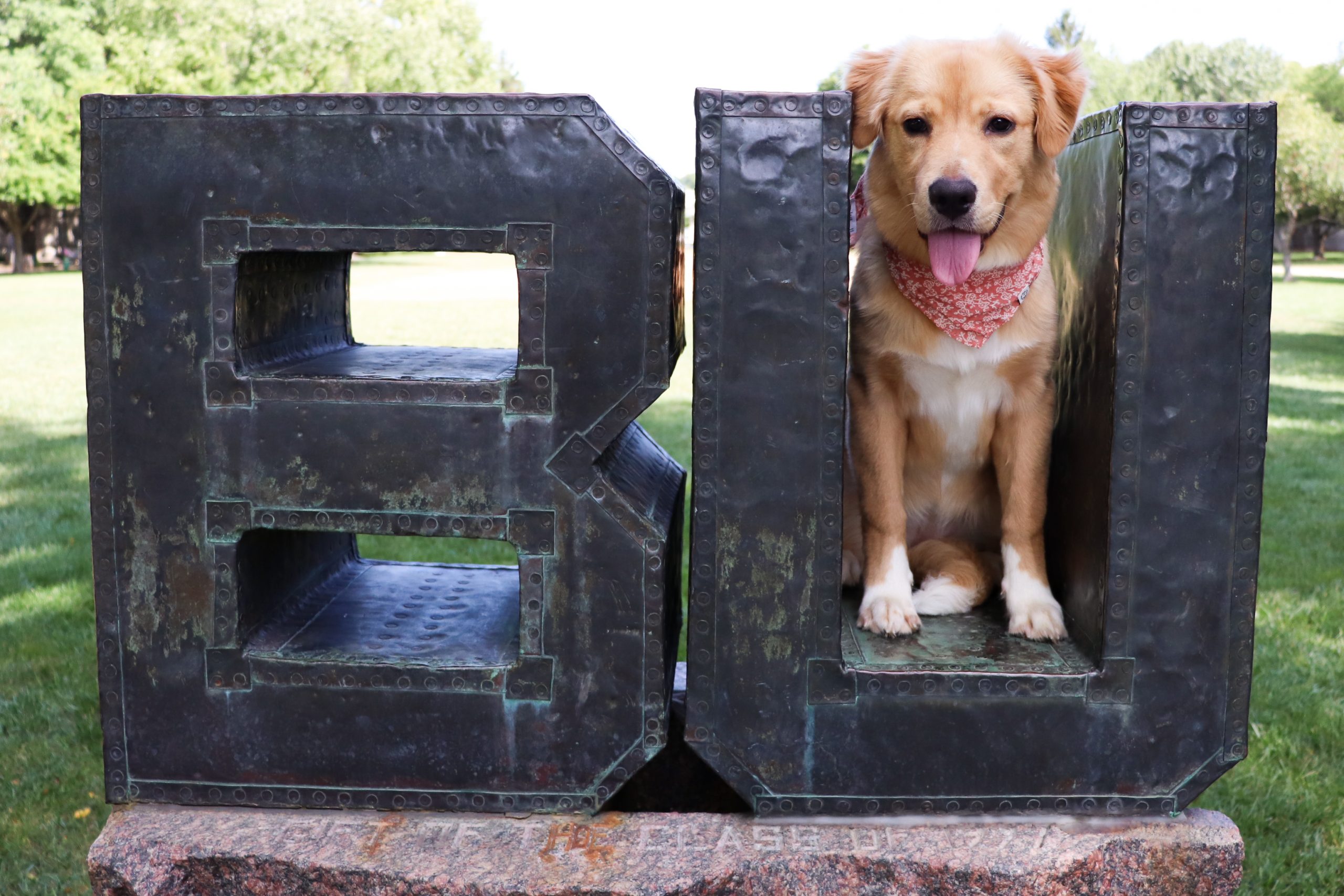 Ripley sits in the Butler BU sign on the Mall. She’s content with her new throne. Photo by Ben Caylor.

From appearing in Netflix specials to appearing at basketball games, Blue IV is a busy dog. Butler’s famous figurehead may be the top dog on campus, but that does not mean he is the only dog living at Butler. Many canines of various breeds find their home across the university.

Oscar, a 10-year-old chihuahua, enjoys a snack in his favorite spot in his AV living room. Photo by Ben Caylor.

Oscar the chihuahua finds his residence in Apartment Village on the outskirts of campus. Living with Amanda Weiderman, a senior mechanical engineer and economics major, Oscar spends his days looking out of the window and relaxing in Weiderman’s apartment.

Oscar’s tiny build and docile nature makes him an excellent pet to have in an AV apartment.

“I have lived in Ross, Resco, University Terrace and AV, and I think that the dorms would have been too small,” Weiderman said.

Oscar is registered as an emotional therapy animal or an ETA. Butler has several policies Weiderman had to follow in order to get Oscar on campus. This includes certifications, months of paperwork and writing a paper on why the animal is helpful for students. Applications for an ETA on campus can be found online and by visiting Room 136 in Jordan Hall.

Weiderman does not take him to any academic buildings, so as not to distract students. However, as a registered ETA, Oscar is allowed in almost every building on campus. The chihuahua is also a big fan of a Starbucks Puppicino, a tiny cup of whipped cream made especially for pets.

The size of her apartment cannot make up for the limited space available for Oscar on campus. The grass outside of AV is doable, albeit tiny for even a dog of Oscar’s stature.

“They’re really small patches of grass,” Weiderman said. “I do wish they had designated dog spots, especially by the apartments. There’s not really just a spot he’s supposed to be when he goes outside [to use the restroom].”

Oscar’s big eyes and calming demeanor are enough to make anyone on Butler’s campus smile. Weiderman gleefully lets passers-by pet Oscar and bring a smile to their faces.

“Having a dog around just makes you a little happier,” Weiderman said.

Ripley, a golden retriever mix, smiles for the camera on the Mall. Tuckered out after a long day of fun and play. Photo by Ben Caylor.

Another dog on the opposite side of campus is Ripley, a six-month-old golden retriever and border collie mix. Her owner Lily Shelp, a senior and healthcare and business major, keeps a busy schedule, but Ripley’s energetic personality also demands attention, including at least one walk every day.

Ripley originally came from Tennessee as a rescue from the Companion Animal Rescue and Education, or C.A.R.E, Center and later was a foster puppy in Indianapolis. Shelp saw an advertisement on Facebook for Ripley and brought her home to her senior house.

“It was perfect,” Shelp said. “She fell right into my lap.”

As a young puppy, Ripley’s energy levels are very high. However, Shelp and her roommates stress the importance of training Ripley to be more controlled.

“We tried to socialize her at a young age, so she’s really good around people,” Shelp said.

Ripley and Shelp’s senior house is near Ross. The house has a fenced-in yard that Ripley uses to run around and play, with toys scattered around in the grass. The positives of living with a puppy off-campus are numerous, including that she did not need to be registered through Butler. Still, Shelp has no problem with taking her puppy on campus.

“The whole campus is pretty dog-friendly,” Shelp said. “I’ve never had any problems taking her anywhere. Everyone always asks to pet her, which is a good thing. She loves the attention.”

While on their daily walks, the duo has yet to run into the big dog on campus. However, they both patiently await their first encounter with Butler Blue.

“I’m really hoping to run into him one day,” Shelp said. “She’s so little, I don’t want her to jump on him or scare him, but hopefully, once she’s older and calms down a bit.”

Another puppy also makes his home on the south side of Butler’s campus is CJ, a golden retriever mix who lives in the A-Wing of the Residential College dorm. His owner, Shannon Mulqueen, gushes over the newly-one-year-old puppy. Mulqueen said CJ’s name stands for Colby Jack Cheese.

Mulqueen is the Interim Director of Resident Life and lives on-campus. Her job at Butler is to help students and be close to them in case they need help. CJ is very personable with the students and staff who walk around campus. Mulqueen details his high energy when encountering other dogs and people.

CJ’s personality makes him a wonderful dog to be around, and other dogs take well to him when they play together. However, there is one dog that is above the rest.

“His best dog friend is Gordon [the dog of Erin Garriott, the faculty in residence in ResCo’s B-Wing],” Mulqueen said. “They’re best buddies, they have a great time and they love to play together.”

For Mulqueen, it can be difficult to separate home life from work life. How can you do that well when your job is both inside and outside your window? It seems that CJ offers a great way to show the difference between her intertwining lives.

“[CJ] is pretty cool to be around at the end of the day, especially because I do live on campus,” Mulqueen said.

Being mostly golden retriever with some other breeds mixed in, CJ is a tall, finely built dog. Like many other individuals of his breed, he requires constant physical activity. Mulqueen has actually timed it and said he walks for two hours every day. While Butler offers a great space for CJ and Mulqueen to run, he also has fun at the nearby Broad Ripple Dog Park.

Scooter is Butler University’s first therapy dog. He was introduced in the 2019-20 school year and has since helped alleviate stress from countless students with his handsome looks. Photo by Julian Cirnigliaro.

The Health and Recreation Center may seem like a strange place for a dog to make a home. However, three-year-old Scooter the Cavachon, half bichon, half Cavalier King Charles spaniel, happily trots down its halls almost every day. Owned and cared for by Shana Markle, associate director at Counseling and Consultation Services and coordinating assistant for Butler’s therapy program, and Christine Kiray, assistant director of CCS, Scooter is Butler’s therapy dog— available for students to receive support.

“As a therapy dog, he is available for students to receive support,” Markle said. “Clients come in and come by and see him.”

According to Butler’s website, Scooter’s job and purpose on campus are to assist students and help ease things like anxiety, grief and homesickness. He is available whenever Markle is in her office for scheduled meetings. However, students are not the only people on campus he helps.

“It’s calming for us [staff] too,” Kiray said. “It’s amazing how attuned dogs are to emotions. It’s such a natural, calming effect.”

Scooter’s face breaks into a smile while Kiray and Markle talk about his presence. His face is one that easily sparks happiness and joy.

“He’s a little comic relief sometimes,” Markle said. “He loves walks in Holcomb. He drinks water from the pond.”

However, despite Markle being told “this is a dog campus” repeatedly, she notices the lack of spaces for dogs.

“He is very well-received in all the buildings he goes into,” Markle said.

Just like Oscar, Scooter is also a huge fan of Starbucks’s Puppicinos.

While students, staff and other dogs have taken well to Scooter, one face is apparently not so pleasing.

“He’s very social when it comes to other dogs,” Markle said. “The only dog he has not gotten along with is Blue. For some reason when they’re together, they’ll sniff each other for ten seconds, then start barking at each other.”

However deep-running their feud may be, there is no denying both dogs play essential roles in student life on campus.

As the Butler Bulldogs, canine companionship is vital to many relationships here on campus. Butler Blue may be the central pooch here on campus, but there is no question that the other dogs are as important to the Butler family. People often take for granted the companionship, love, energy and attunement these dogs bring into lives, but the impact can never go understated. Although Butler may lack special space for beloved dogs to congregate together, there is no doubt that Butler is a great place to raise a canine.