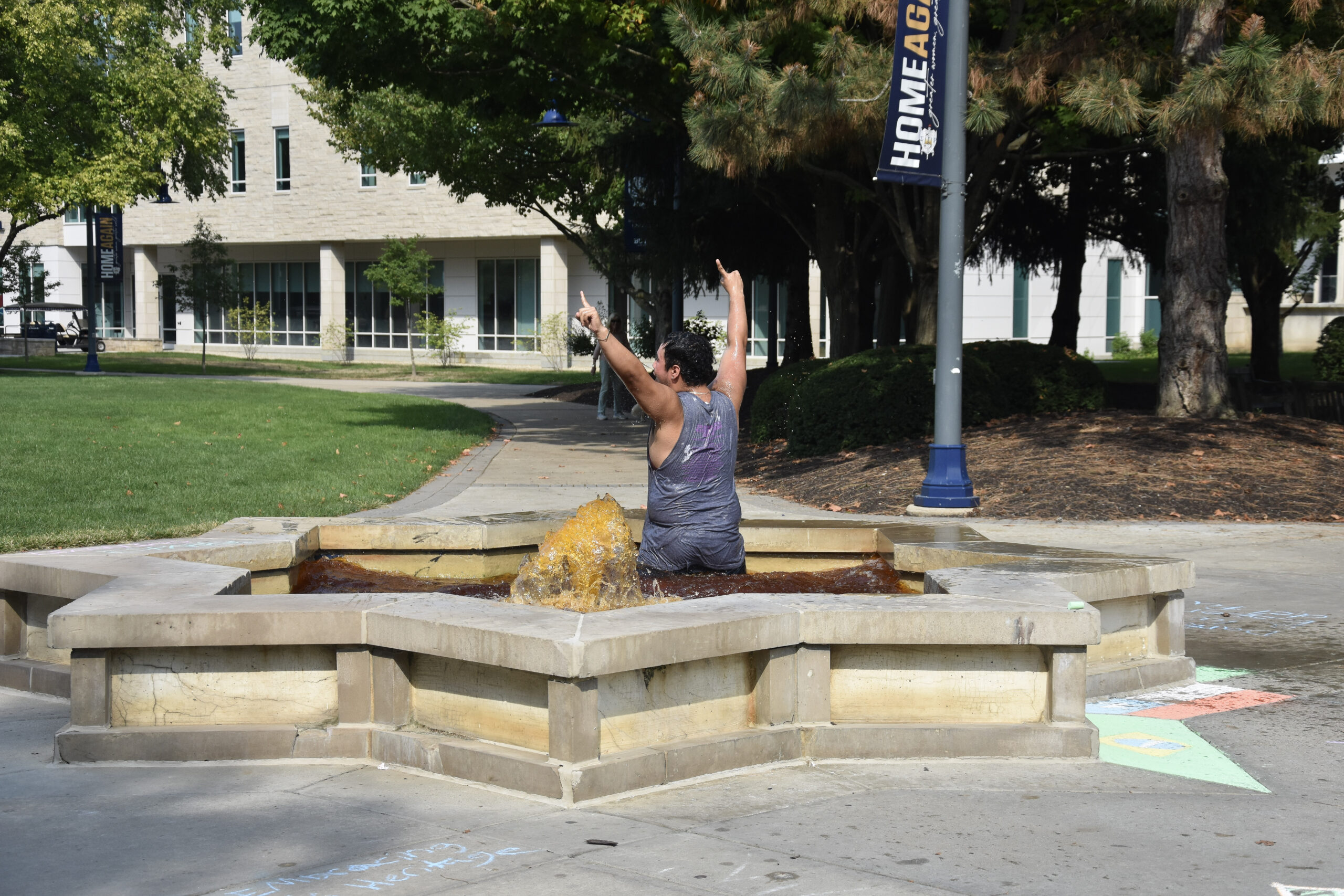 On Friday, Sept. 16 from 3:00 p.m. to 4:00 p.m., student organization Latinx Student Union, referred to as LSU, held their Coloring of Star Fountain event to kick off Hispanic Heritage Month. The event was attended by Latinx and non-Latinx Bulldogs, students and staff alike.

National Hispanic Heritage Month, officially enacted into U.S. law in 1988, is celebrated each year from Sept. 15 to Oct. 15. According to The Library of Congress’s site, the designated month celebrates and honors “the histories, cultures and contributions of American citizens whose ancestors came from Spain, Mexico, the Caribbean and Central and South America.” LSU has programming planned throughout the 30-day period, and the Coloring of Star Fountain event was the first of such events.

The event began with a “cocktail hour” of guacamole and chips catered by Bon Appetit. Guac in hand, attendees mingled while Latin music played from speakers. In addition, facilities colored the water of Butler’s Star Fountain orange ahead of the event.

“Coloring Star Fountain is very much a mimic of the event the Indiana Latino Institute does every year at the [Indianapolis] canal,” Alarcón Nava said. “ … Orange, overall, it signifies joy and creativity, and so that’s what we really want to share with the community.”

After the brief guacamole prelude, Alarcón Nava introduced several speakers who each gave a few words on the importance of the month and the event: Khalilah Shabazz, newly hired vice president and chief diversity officer; KaBree Harley, also newly hired assistant director of the Efroymson Diversity Center; and Dr. Adrian Bello-Uriarte, lecturer of Spanish and faculty advisor of LSU.

Lastly, Alarcón Nava himself gave a speech to officially open LSU’s celebration of the month. He spoke about how the Latinx community at Butler has evolved through the years — and with it, LSU as an organization — and the diversity within the breadth of the community. He also thanked the various people who have supported LSU’s operations and Latinx students on Butler’s campus, including the formation of the Latinx Alumni Association in 2021. He ended by encouraging everyone to chalk around Star Fountain what Hispanic Heritage Month means to them.

Dr. Brandy Mmbaga is an assistant professor of organizational leadership, the assistant dean of community engagement and the faculty director for diversity, equity and inclusion for the Lacy School of Business. Attending the event, as a person of Mexican heritage, she found it — particularly its public location — significant.

“[An event like this] allows for us to collectively meet,” Mmbaga said. “So many times, we’re kind of dispersed around, so it’s great to be able to see that visual representation here on campus. It’s done so in such a positive manner; it’s celebration. We deserve to not only to be here but to be recognized, to be acknowledged and, more so, to be celebrated.”

Andrea Rios, a Mexican American sophomore biochemistry and Spanish double major, also attended the event. The public aspect of the event was her favorite part of it as well.

“I feel like [the Latinx community is] a step closer [to] being part of campus by dyeing the fountain orange,” Rios said.

The messages written around Star Fountain added to the public nature of the event. In response to Alarcón Nava’s invitation to chalk what Hispanic Heritage Month means to them, both Latinx and non-Latinx attendees wrote a variety of answers: “Celebrating and sharing my culture,” “Learning/finding my lost roots,” “Being Black + Mexican, HHM allows me to celebrate the individual parts of me that collectively make me who I am” and more. Some even drew the flags of their respective Latin American cultures.

Both Alarcón Nava and Rios feel that having a strong Latinx community at Butler has been important for them. Alarcón Nava reported having a sense of culture shock when he became a student here.

“Coming on campus, I experienced such a heavy effect of culture shock,” Alarcón Nava said. “I needed community … I knew I needed that space.”

While Rios did not feel culture shock when she came to Butler, she has become more acutely cognizant of her heritage.

“I’ve been lucky enough to always [have] known my roots and my heritage growing up,” Rios said. “But I grew up in a very white environment … then coming to Butler, I didn’t have culture shock just because I had that culture shock growing up in elementary and high school. But just getting here now, I’m more aware of my culture in a type of way, and I have a community here, especially in the Diversity Center, [where] I feel like a safe space to express who I am.”

Butler is a predominantly white institution, with an 81.3% white student enrollment last year in the fall 2021 semester. That same semester, 6.1% of the student population identified as Hispanic: doubling the 3% proportion of the fall 2013 semester.

While this remains a stark contrast to — according to the U.S. Census — the 10.4% of Indianapolis residents who are identified as Hispanic or Latino, along with the 18.7% Hispanic or Latino population in the U.S. overall, Mmbaga is optimistic about the growing racial diversity at Butler — particularly with LSU’s event.

“I definitely think we have a lot of work to do, if I’m being completely honest and transparent,” Mmbaga said. “But having events like this makes it feel like maybe we’re taking steps in the right direction.”

While Latinx people exist in the Butler community no matter the time of year, Hispanic Heritage Month presents Americans an opportunity not only to celebrate Latin American culture but also to consider more deeply how the population has impacted the United States on a societal level.

“For me, Hispanic Heritage Month means a time for me to reflect on not just my own culture and traditions,” Alarcón Nava said. “But [it’s also a time] to be more mindful of all the contributions that Latinx individuals are doing [for] this country … and being innovative in [the] way [that] their history is my history, and my history is theirs.”

Look out for LSU’s remaining events for Hispanic Heritage Month: