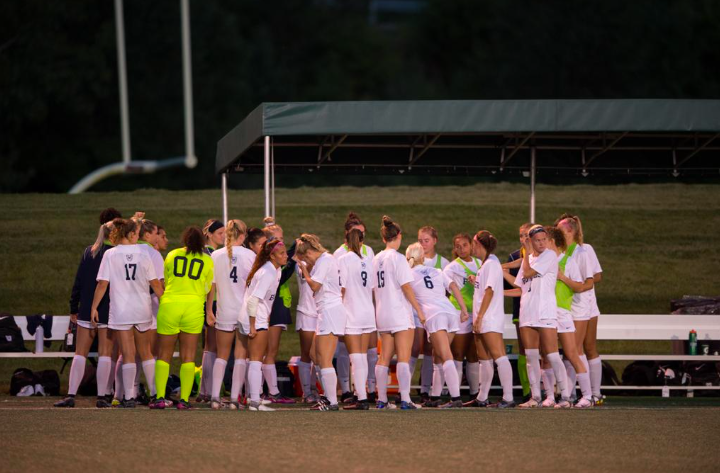 The Bulldogs take one last team huddle before taking on Wright State. Photo courtesy of butlersports.com.

The Butler Women’s soccer team had their record move to 3-2 this week after a 7-0 beatdown victory against Wright State and a 2-0 senior day loss to Wisconsin. The Bulldogs bounced back in the Wright State game after suffering a loss to Illinois last week in the final minutes of the game.

Butler’s victory over Wright State was a masterclass from top to bottom from the beginning of the game. Senior forward Katie Soderstrom opened the scoring in just the third minute of the match and from there the Bulldogs never looked back. The team scored five goals in the first half before adding two more in the second to complete Wright State’s misery. Soderstrom was yet again the star of the match, netting a hat-trick while redshirt junior Abigail Isger scored a brace. Both junior Alli Leonard and sophomore Sara Trandji scored a goal a piece as well.

The Bulldogs will look back on this game with optimism not just on the offensive end, but also on the defensive end. Redshirt freshman goalkeeper Anna Pierce was only forced to make two saves in the match, but the Butler defense also put in an impressive shift. While the Bulldogs offense cranked out 23 shots, the defense only allowed 4 shots all game.

Sunday’s game against Wisconsin however would not go as well for Butler. The Bulldogs fell behind early and could not claw their way back, ultimately losing 2-0.

Wisconsin made the most of their chances in the final third. Graduate student Natalie Viggiano put the Badgers up in the ninth minute and then a foul on Butler set senior Emma Jaskaniec up to convert a penalty for the away side as they pulled away.

The day was not only meant for soccer though, as Butler recognized five seniors for their contributions to the program during their careers at the university. Aliya Diagne, Morgan Kloosterman, Gretchen Skoglund, Gabby Smith and Soderstrom were all honored before the game for their accomplishments.

Despite the ups and downs of the week, the Bulldogs are 3-2 after five games and look to improve on their record next week as they take on the Dayton Flyers at the Bud and Jackie Sellick Bowl on Thursday, Sept. 8th at 7 p.m.