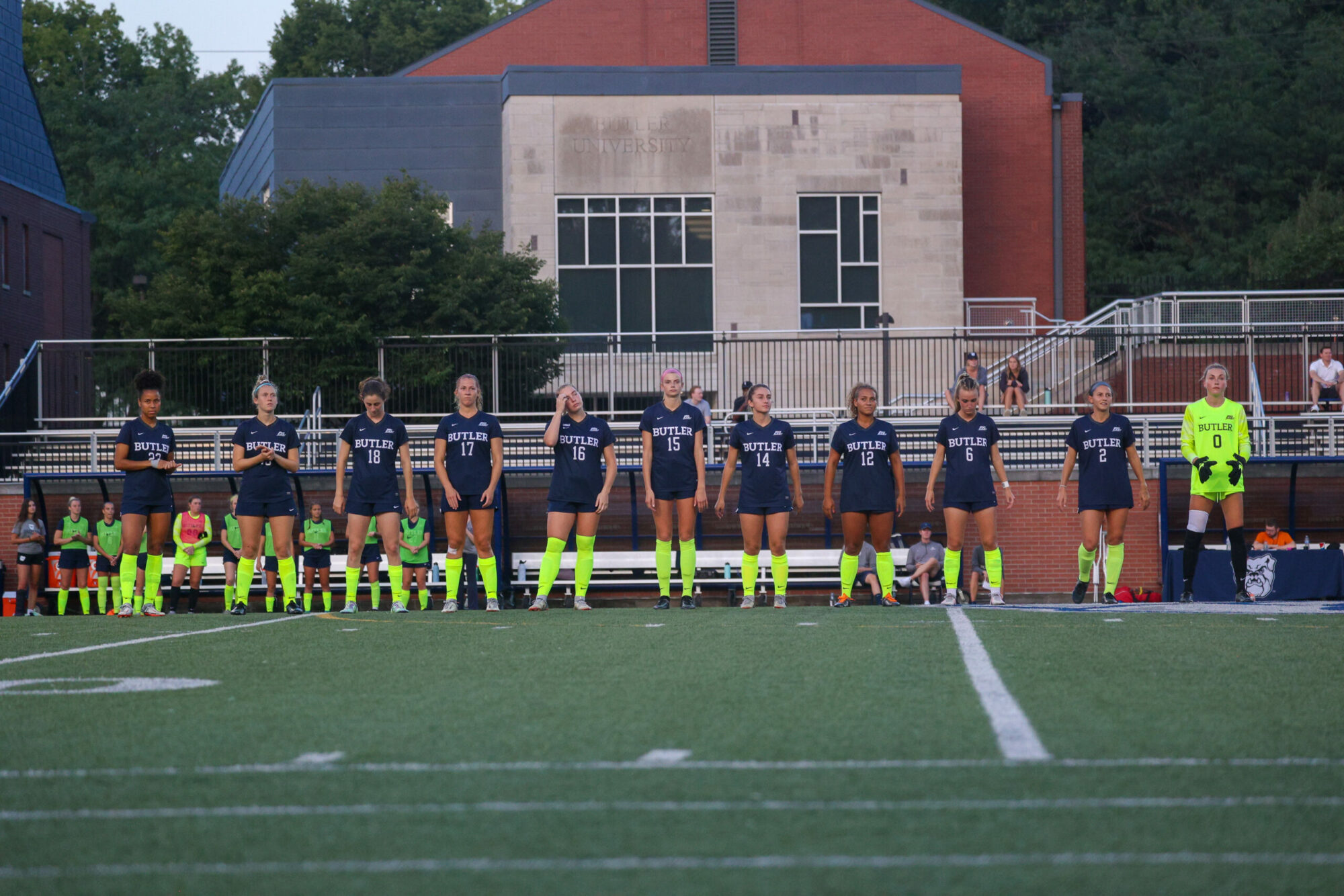 The Butler women’s soccer team currently sit at 3-4 with one game to go before taking on the Big East. Photo by Claire Runkel.

The goal for the Butler women’s soccer team is simple, they want to go after every possible title in the 2022 season.

Co-head coach Rob Alman was very clear in his expectations for his team this year, stating that winning the Big East is just the beginning of what he hopes is a highly successful season for the Bulldogs.

He went on to elaborate that the team has an expectation to be in the mix for an NCAA tournament bid by the end of the season.

The Bulldogs ended last season with a 15-5-1 record before going to the Big East tournament semifinals where they fell to eventual tournament champion Georgetown. Butler would receive a bid for the NCAA tournament but were ousted in the first round by Big Ten side Wisconsin.

This season, the Bulldogs currently sit at 3-4 through seven games, but had impressive victories over Michigan, Wright State and Western Michigan. Although the Bulldogs have dropped four games to start the season, there have been flashes of promise for a team that could be incredibly dangerous down the stretch. Alman was optimistic about this year’s squad, saying he thinks the team “is probably the most exciting thing we’ve had in terms of going forward in the attacking options.”

One of the Bulldogs prominent attacking players is super senior forward Katie Soderstrom, who has been on fire for the Bulldogs, scoring a team-high five goals in only seven games. Soderstrom also is tied for the team lead in assists, and over her career has climbed the ranks to become tied for second all-time in assists for Butler. Soderstrom said her goal for this year is just to enjoy it, as it will be her last season for the program. With that in mind, she still sees great opportunity for this team.

“I think we have a lot of potential as a team,” Soderstrom said. “We’ve seen glimpses of it in the first games so far, but kind of just putting all the pieces together and I think we have the potential to do great things.”

On the defensive side of the pitch is experienced senior defender Alana Wood. Playing 49 games over her career at Butler, she cites the team’s unity as something that can act as a catalyst for the Bulldogs down the stretch. The Michigan native likes how the team has come together in the early season.

“We’re all really, really close as a team… it’s not a hierarchy,” Wood said. “It was great watching our freshmen come in this year and they jumped right into everything we were doing and took it on full swing… it’s been fun.”

Senior forward Gretchen Skoglund is another player for Butler that is seeing promise in her teammates. Skoglund is looking forward to seeing how the pieces come together for the team.

“We got a lot of new talented players that we’re really excited to incorporate into our previous team dynamic,” Skoglund said.

Skoglund went on to say that the team being close contributes to on-field success, which is something all Bulldogs fans can get behind.

In terms of scheduling, the Bulldogs have an early slate filled with top opponents from other conferences around the country. Junior defender and Australia native Claire Farrington said she is not overlooking any games this season, but is looking forward to playing in a few certain matchups.

“There’s not a single game I don’t want to play in,” Farrington said. “But we do have some rivals [like] Georgetown [and] Xavier that are always big games and fun to play.”

The game against Georgetown will be a revenge match for Butler on Oct. 23. The Hoyas have played the role of spoiler for the Bulldogs in the previous two seasons, defeating Butler in the Big East tournament in the championship game in 2020 and again in the semi-finals in 2021. Alman acknowledged the importance of these matchups and said while the Bulldogs will not underestimate anyone, everyone will be ready to play in these rivalry games.

“Those games are always going to be…a little bit circled on everyone’s calendar just because there have been the games that have ultimately decided who’s won the league over the last few years,” Alman said. “So yeah, we don’t overlook anyone but I think [in] those rivalries everyone will be very much ready to play.”

One way the players agreed that students could help them achieve their goals is by providing support and making the Sellick Bowl a tough place to play for opposing teams. Soderstrom was appreciative of the support the team has received so far from fans and especially the Dawg Pound.

“It does make a difference,” Soderstrom said. “It makes us smile and laugh when you see them out there barking at the other team… the Dawg Pound was really fun in a couple of our games.”

Farrington agreed that fans do add to the fun and thinks that spectators won’t be disappointed in what transpires on the field.

“It’s always so much fun when we have fans and people we know cheering us on and we’d like to think that we play some nice [soccer] that people would want to watch,” Farrington said. “So if you have time…come out and watch, bring your friends and have a good time.”

The Bulldogs take on Ball State at home in the Sellick Bowl on Sept. 15 for their last game before Big East conference play begins.