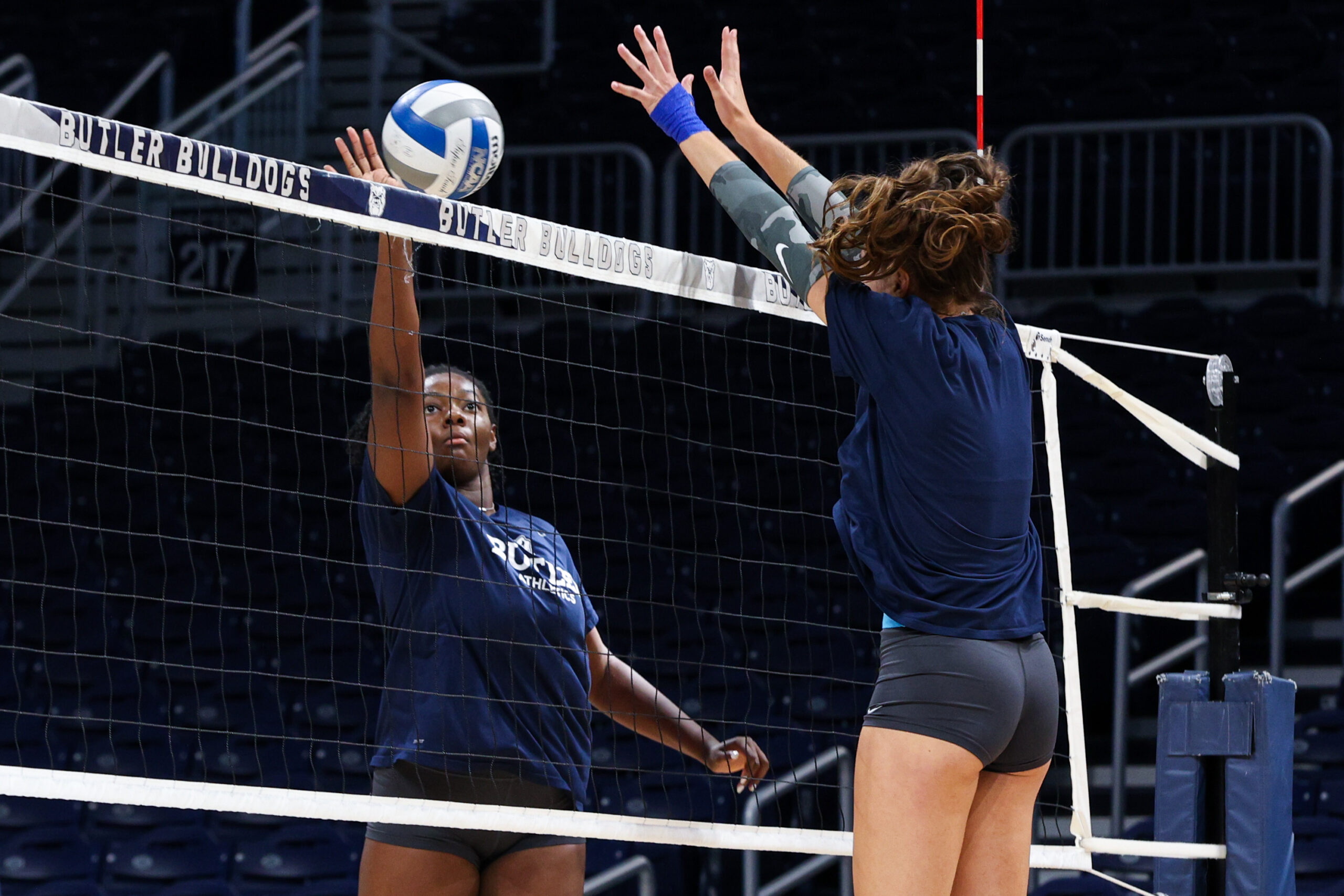 Sophomore Destiny Cherry attacks the ball on the net at practice. Photo by Claire Runkel.

This past weekend Butler women’s volleyball team hosted the Top Dawg Challenge at Hinkle with matches against Eastern Illinois, Oakland and Akron to open their season.

Although the Bulldogs lost their only exhibition game against Bradley earlier this month, the team flipped the switch this weekend, opening their season with a perfect record of 3-0.

The Bulldogs started the season strong against Eastern Illinois on Friday with a 3-1 set victory with scores of 25-22, 22-25, 25-19 and 25-19 to take down the Panthers. Small scoring runs proved to be the difference maker against Eastern Illinois. The Bulldogs went on a 4-0 run to close the first set, a 6-0 run helped ease the second set and a 9-0 run helped cap the match.

Later that evening, Butler swept Oakland in three sets, posting scores of 26-24, 25-20 and 25-19.The game against Oakland followed a similar pattern with multiple runs, but kills proved to be another important part of the game for the Bulldog’s success thus far. Sophomore setter Jenna Splitt had 31 assists, setting up five Bulldogs with at least seven kills— sophomore Mariah Grunze, redshirt freshman Autumn Flowers, senior Megan Sheridan, freshman Rylie Tam and junior Marisa Guisti– which kept the Grizzlies guessing on defense.

The Top Dawg Challenge saved the best game for last. After two “easy” games against Eastern Illinois and Oakland, the Bulldogs concluded the weekend in a high adrenaline, five set match against the Akron Zips. In addition to runs and kills, blocks led the way for the Bulldogs to come back from a 1-2 deficit in the match. They outblocked the Zips 16-0 with sophomore Amina Shackelford and Guisti racking up nine blocks each. By the end of the match, they also beat Akron head-to-head in kills, 57-51. The Bulldogs finished the weekend with final scores of 25-18, 19-25, 25-17, 25-16 and 15-8.

With the conclusion of the tournament, junior Jaymeson Kinley, Flowers and Sheridan were named to the All-Tournament team and Kinley named MVP.

The Bulldogs will look to continue their perfect season on Friday, Sept. 2 against Hofstra at 12 p.m. EST, as they head out west to compete in the Denver Invitational.