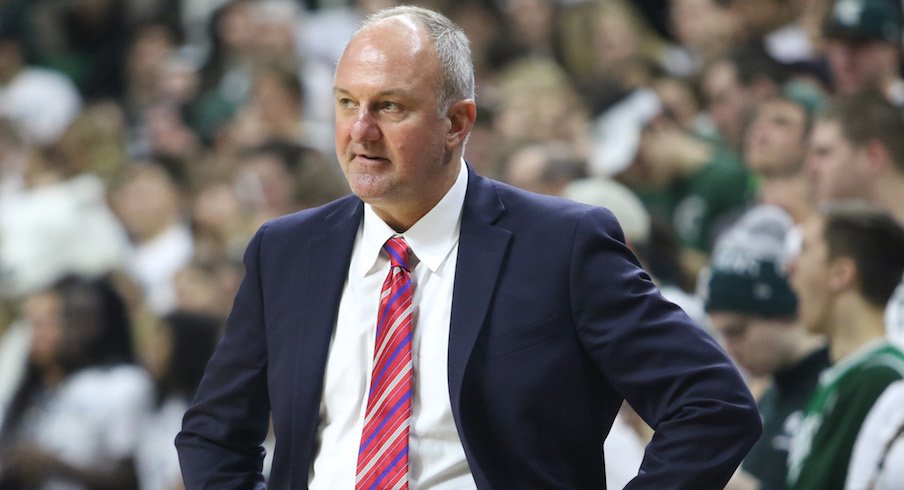 Thad Matta on the sidelines during his time at Ohio State. Matta has won 439 games in 17 seasons coaching Division I basketball. Photo courtesy of Eleven Warriors.

Two days after parting ways with LaVall Jordan, the Butler men’s basketball program announced that Thad Matta will return to Butler as head coach. The announcement was made in a release from Associate Athletics Director/Communications John Dedman. Matta will be introduced to the Butler community on Wednesday, April 6 at Hinkle Fieldhouse.

Matta, 54, has served as a Division I head coach for 17 seasons – at Butler, Xavier and Ohio State – and amassed a 439-154 record and 13 NCAA Tournament bids. Vice President/Director of Athletics Barry Collier, who led the search to find a new head coach, explained why Matta is a good fit for the position.

“The success that Thad has achieved at every one of his programs speaks for itself,” Collier said. “He is a championship-caliber coach and recruiter who brings valuable experience and contagious energy to Butler. I have seen that personally in Thad as a player, assistant coach and head coach. The Matta Family – Thad, Barb, Ali and Emily – has a deep appreciation for Butler and I know they join all of the Butler community in how excited we are for what’s to come.”

Matta’s connection with Butler is deep. He played for the Bulldogs from 1987-1990, was an assistant coach from 1991-1994 and 1997-2000, and briefly served as the head coach in the 2000-2001 season. In his lone season as head coach at Butler, Matta led the Bulldogs to a 24-8 record, both the Midwestern Collegiate Conference regular season and tournament title and led Butler to its first NCAA Tournament win since 1962.

In his three seasons as head coach of Xavier from 2001-2004, Matta led the Musketeers to the NCAA Tournament every year and won two Atlantic-10 regular seasons titles and two Atlantic-10 tournament championships.

Matta is most known for his time in Columbus, where he led the Buckeyes to nine NCAA Tournament appearances from 2004-2017, including two Final Four appearances in 2007 and 2012. Matta’s Buckeyes won five regular season Big Ten titles and four Big Ten Tournament titles. He is the winningest coach in Ohio State basketball history.

In addition to his success on the collegiate court, Matta has a track record of helping his players reach the NBA. In his time at Ohio State, Matta had 10 of his players selected in the NBA Draft, including Mike Conley, Greg Oden and Evan Turner.

In 2017, Matta and Ohio State mutually agreed to part ways as he struggled with back and foot problems. Matta was asked then if he saw himself ever getting back into coaching, to which he responded, “never say never.”

After taking time away from basketball, Matta most recently served as the Associate Athletic Director for Basketball Administration at Indiana University during the 2021-22 season.

Butler University President James Danko endorsed the decision in the release, commending Matta as both a coach and a person.

“Thad Matta is an exceptional choice to lead our men’s basketball program,” Danko said. “In Thad, Butler is getting a first-class person who has put together one of the strongest résumés in all of college basketball over the past few decades. He is a Bulldog who embodies the excellence and character that we hope all of our graduates aspire to achieve in their respective industries and daily life. Our basketball program is in great hands under Thad’s leadership.”

In the release, Matta explained what the opportunity to come back to Butler means to him.

“Butler is a special place, one that Barb, Ali, Emily and I each chose as our school,” Matta said. “I’m grateful for the opportunity to return to Butler and lead our men’s basketball program. There is a solid foundation in place and I’m confident that Butler will consistently be among the top programs in the BIG EAST. I can’t wait to attack the work we have in front of us and to be back on the sidelines at Hinkle Fieldhouse.”