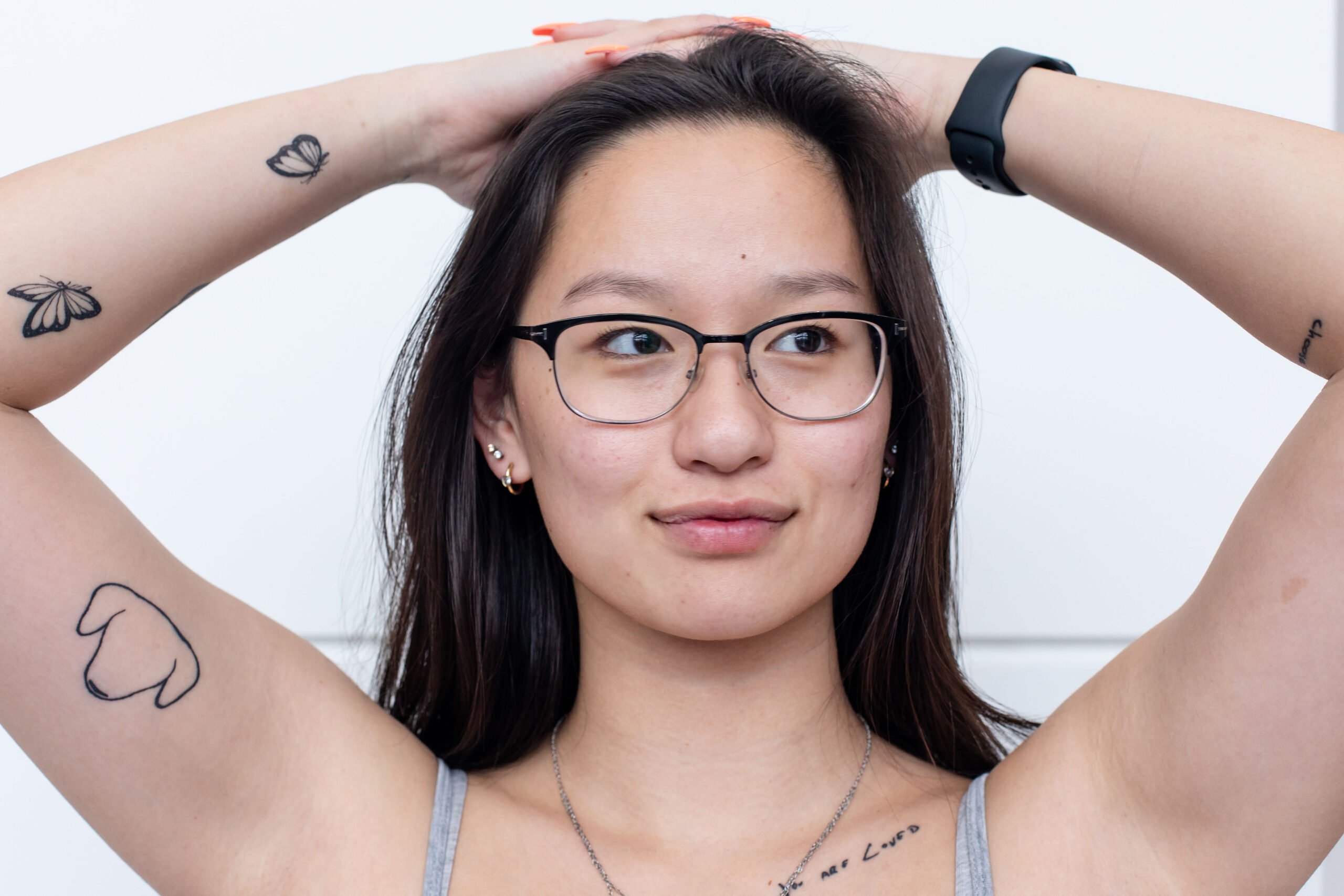 “Tattoo Tales” is a series in which The Butler Collegian speaks with a Butler community member about their tattoos and the stories behind them.

Gia Flynn, a first-year psychology major, already has eight tattoos — though she got her first one just a year ago. Bitten by the tattoo bug, she plans to get 22 tattoos by the time she turns 22. The quotes, lyrics, flowers and animals that adorn her body each represent something meaningful in her life.

THE BUTLER COLLEGIAN: What inspired you to start getting tattoos?

GIA FLYNN: I got my first tattoo in honor of my dad who’d passed, and I was like, “Oh, it’ll just be this one.” And then about three months later, or two months later, I got my second one, and then from there, it’s just been this ongoing process

TBC: When was that first tattoo?

GF: Coming up on a year ago now. So in the span of a year, I’ve gotten eight tattoos.

TBC: Can you list off of the top of your head all the tattoos that you have?

GF: Yes, so under my left collarbone is my first one, and it says “you are loved” in my dad’s handwriting. My next one is a thigh piece, like thigh-hip kind of deal, on my left side; it has five fern leaves in it … And then for my next set, I got three of them done the same day, so I have yellow tulips on my left ribs. I have “choose love” on my left forearm, and I have my dog on my right bicep … My next two I got in the same day as well over winter break, and those were “I have faith in the future” on my right forearm, and I have “you sunshine you temptress” on my right ribs. And then my most recent tattoo [was] the butterflies on my right arm in February.

TBC: What do the yellow tulips represent for you?

GF: So the idea of the yellow tulips — the meaning is the same as a semicolon [tattoo], representing a struggle in the past like depression and getting past suicidal ideation and all of that. I just couldn’t find a semicolon design that I loved, and then I learned about the yellow tulip meaning, and I was like, “That’s what I want next.”

TBC: Where did you get the idea for the “you sunshine you temptress” and the butterflies?

GF: “You sunshine you temptress” is a song lyric in probably one of my favorite songs ever; it’s a Harry Styles song. And I think it’s just a beautiful lyric, and it’s like a reminder to me — it’s like, I am, you know, sunshine … [the tattoo is] just like a reflection of me, in a sense, or I guess in a way of how I want to see myself.

And then the butterflies I got in symbolization of being four years clean of self-harm, and I got [them] around my anniversary date, which is why it’s some random weekend in February. And I have five of them because there’s five members of my family — and double meaning kind of that I finished my fourth year [of being clean], and I’m going into my fifth.

GF: I don’t know if I would have one. I think if I had to pick, it would probably be the outline of my dog just because how fun is that?

TBC: What [and when] was your most recent tattoo?

GF: My most recent tattoo [was] the butterflies on my arm. I have five of them, but I count them as one tattoo because I got them done together. That was February, like mid-February.

TBC: Do you have plans for your next tattoo?

GF: Yes. So I really love the idea of a spine tattoo, so I’ve been playing around with some different ideas about that.

TBC: Where do you get your inspiration from?

GF: All my tattoos have really close meanings to me, like starting out with my dad’s handwriting for my first one. And then it’s really just whatever I find meaningful, that I like. I have one on my leg that has fern leaves in them because my middle name is Fern. [I also have] handwritten messages about things that I believe in [and] from people that I love.

TBC: How long usually does it take for you to have the idea of the tattoo until you get it?

GF: That varies. So I had the idea of getting the one with my dad’s handwriting for a while, but really from April of last year [around the time of getting my first tattoo], I started thinking about my next one, which I got done in the end of June, early July, of that same summer — so about a few months.

TBC: How do you feel like your tattoos reflect who you are?

GF: I think they’re all really meaningful because they all mean something personally to me. I admire and appreciate the people that can kind of just get whatever they want. I’m just not that person, so every tattoo of mine represents something of me or something I believe in or a part of my past or something like that.

TBC: [We] learned about you and your tattoos when you did the Instagram takeover for BU Be Well as a student assistant. It seems like for you, tattoos are like a reflection of your wellness. Is that true?

GF: Definitely yes, and just so many other things: like a reflection of who I am, what I believe in, also how I want to view myself and the world, also symbolizations of my wellness and where I’ve came from and where I want to go.

TBC: Any advice for people who want to start getting tattoos?

TBC: Anything else you want to say?

GF: Not really. I love tattoos — I think they’re great, I want so many more. A common factor in people not getting tattoos is like, “Oh, how’s it gonna look when you’re older?” and all that. And I’m like, all of you is going to look different when you’re older; you might as well draw on yourself and have it look cool while you can.