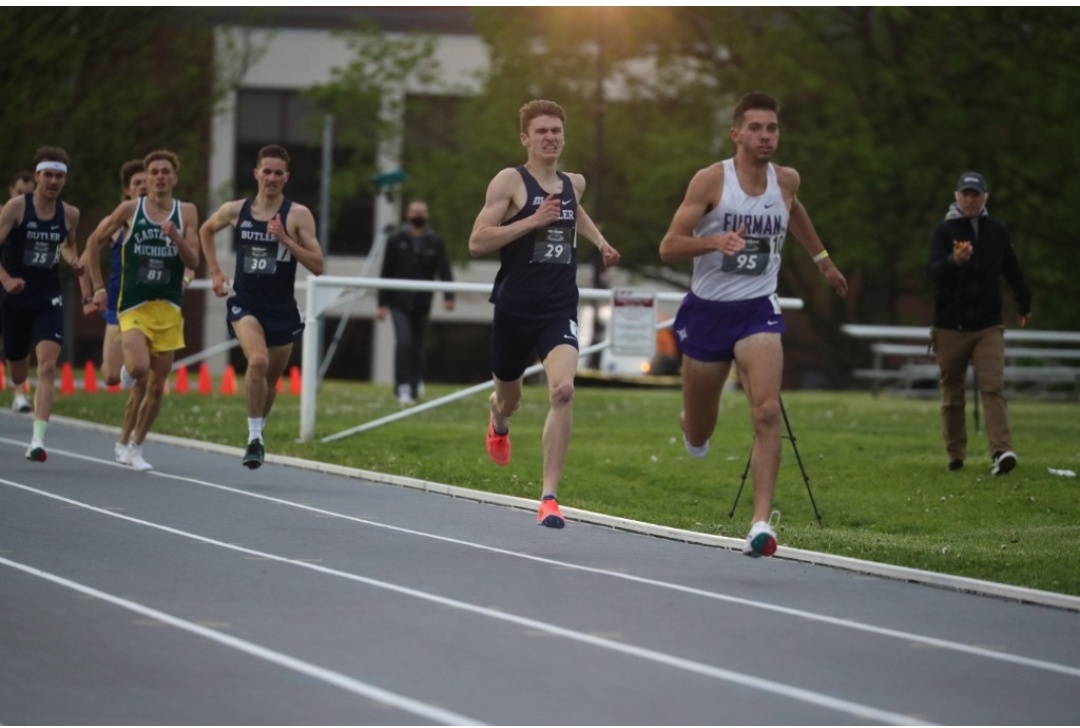 Junior Jesse Hamlin chases the leader down the final stretch of the 1500 meter race at the EKU Rick Erdmann Twilight on April 16, 2021. Photo courtesy of Butler Athletics.

On April 14-15, Butler track and field headed west to compete at the Bryan Clay Invitational in Azusa, California.

The meet was among the largest and most competitive that the Bulldogs will attend this season. Many of Butler’s top runners competed for the first time in three weeks since the Raleigh Relays.

On the men’s side, sophomore Isaac Kane was the top short distance runner for Butler. In the 400 meter race, he sprinted to a personal best time of 47.64, placing him seventh in a field of 85. The time was the second fastest in school history. Kane also finished a solid 11th of 114 runners in the 200 meter race with a time of 21.36.

Graduate student Matthew Wigelsworth set another high bar with the second fastest time in program history for the 800 meter race. He ended the race with a personal best of 1:48.92, placing him 17th in a massive field of 196. Graduate student Chandler McGaha was also a top runner in the event, finishing 30th with a time of 1:49.78.

Additionally, McGaha set a personal best time in the 1500 meter race, but junior Jesse Hamlin had the most impressive performance in this event. Hamlin’s time of 3:38.85 bettered his own program record and placed him 16th in a field of 145.

Graduate student Pierre-Louis Detourbe and sophomore Will Minnette both achieved personal bests in the 5000 meter race with times of 14:03.78 and 14:15.70, respectively.

Sophomore Zac Stanley flew to eighth place in the long jump with a leap of 7.41 meters. This mark was a personal record and the third best jump in school history.

On the women’s side, most of the notable results occurred in long distance events.

The Bulldogs’ top four runners in the 5000 meter race all ran personal bests. Senior Mia Beckham led the way, finishing second in her section with the fourth fastest time in school history at 16:10.00. Graduate student Kami Hankins, freshman Laure Bertrand and senior Maddie McLain were the other successful Bulldogs in the event.

Next week, the Bulldogs return to their home state for the Indiana Invitational in Bloomington on April 22-23.