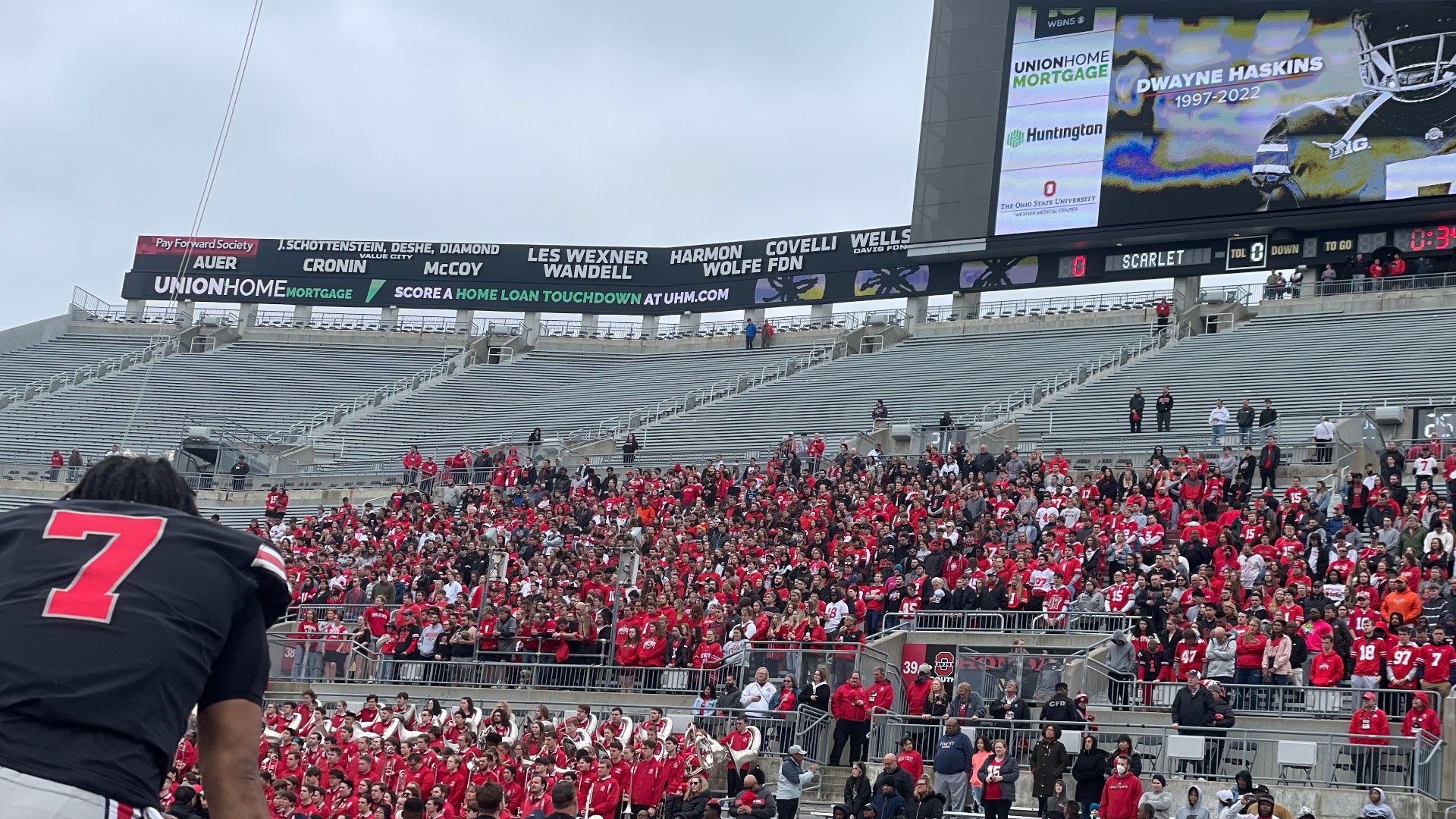 Current Ohio State quarterback, C.J. Stroud, takes in a moment of silence for the late Dwayne Haskins while wearing his jersey in his honor at Ohio State’s 2022 spring game. Photo Courtesy of Adam King of WBNS-10TV.

In the early morning on April 9, Dwayne Haskins was struck and killed by a dump truck as he was attempting to cross the westbound lanes of a highway on foot in South Florida. He was in Florida for training with other quarterbacks, running backs and wide receivers, organized by Mitch Trubisky, ahead of the 2022 NFL season.

ESPN NFL insider Adam Schefter was the first person to report Haskins’ tragic death. The wording of his first tweet was incredibly insensitive and was heavily criticized.

“Dwayne Haskins, a standout at Ohio State before struggling to catch on with Washington and Pittsburgh in the NFL, died this morning when he got hit by a car in South Florida, per his agent Cedric Saunders,” Schefter wrote in the initial tweet. “Haskins would have turned 25 years old on May 3.”

Schefter later changed the wording of his tweet after much criticism was thrown his way.

“Dwayne Haskins, a standout at Ohio State before becoming Washington’s first-round pick and playing in Pittsburgh, died this morning when he got hit by a car in South Florida, per his agent Cedric Saunders. Haskins would have turned 25 years old on May 3,” Schefter wrote in his second tweet.

Haskins’ passing evoked similar reactions to that of Washington Redskins safety Sean Taylor, who was murdered in November of 2007.

When news broke of Taylor’s murder, the Washington D.C. community flowed with support and tributes for the defensive back. The media, however, illustrated the death of Taylor as unsurprising. They cited his past negligence and issues with the police as evidence that his murder was bound to happen.

In reality, Taylor was just a man gunned down in his own home while trying to protect his family from a home invasion.

Just like in Taylor’s case, the dehumanization of athletes is rearing its ugly head again — this time with Dwayne Haskins.

As fans woke up on Saturday, they learned the devastating news, with Schefter’s tweet as the first way of hearing it.

Sophomore strategic communication major Michael Herald grew up an Ohio State fan and watched Haskins grow as a player and as a person.

“When I woke up on Saturday, I was scrolling through the notifications on my phone and I was like this can’t be real,” Herald said. “And then I clicked on it and it was Adam Schefter’s tweet … it honestly kind of reminded me of the Kobe [Bryant] situation where I didn’t know what was really going on. It took several hours for other things to come out, so it was very confusing.”

Haskins was a successful quarterback at The Ohio State University. He played at the university from 2016-18. He became a Heisman Trophy finalist in his final season while setting Big Ten records for passing yards, touchdown passes and total offensive yards.

Ohio State recently honored Haskins at their 2022 spring game. Current quarterback C.J. Stroud wore Haskins’ No. 7 jersey and kneeled for a moment of silence before kickoff. Haskins’ initials were also placed on the field near the five-yard line.

He became the first Buckeye quarterback drafted in the first round of the NFL draft since 1982. And yes, Haskins did have a difficult first two seasons with Washington before signing with Pittsburgh prior to last season. We all struggle with school, work or just our personal lives occasionally, but should that be mentioned in our eulogies when we die?

As an Ohio State fan, it hurts to see how media members first addressed his death, mentioning his early struggles as an NFL quarterback. The fact that Schefter even mentioned his troubles before announcing his death makes it worse.

Sophomore health sciences major Kyle Klumpp grew up an Ohio State fan and was upset with how the media portrayed Dwayne Haskins in the light of his death.

No apology was given from Schefter until the late afternoon of Monday, April 11 via his podcast, The Adam Schefter Podcast.

“I wish I could have that tweet back,” Schefter said. “The focus should have been on Dwayne, who he was as a person, a husband, a friend and so much more. I wanted to apologize to Dwayne’s family, his friends, the players in the National Football League and offer my condolences to everybody close to Dwayne.”

There is nothing wrong with providing the background of an athlete when they pass, but there is no purpose in emphasizing someone’s faults in their career.

Along with Schefter, Pro Football Hall of Famer and radio analyst, Gil Brandt added to the flaming media on Sirius XM just hours after Haskins’ death.

“He was a guy that was living to be dead,” Brandt said. “Maybe if he stayed in school a year he wouldn’t do silly things [like] jogging on a highway.”

We do not even know why Haskins was walking on the highway to begin with, it’s wrong to speculate before the facts are revealed.

These athletes are human first. What they put onto the field is not what should be discussed when we mourn their death. If the media saw Dwayne Haskins as more than an athlete, then the first thought upon his death would be about his abilities as a husband, father and role model to so many people in the world.

This is why we all need to take the time to acknowledge who athletes are before talking about what they do for a living. It is time to begin treating athletes like humans before scrutinizing their statistics on the field.