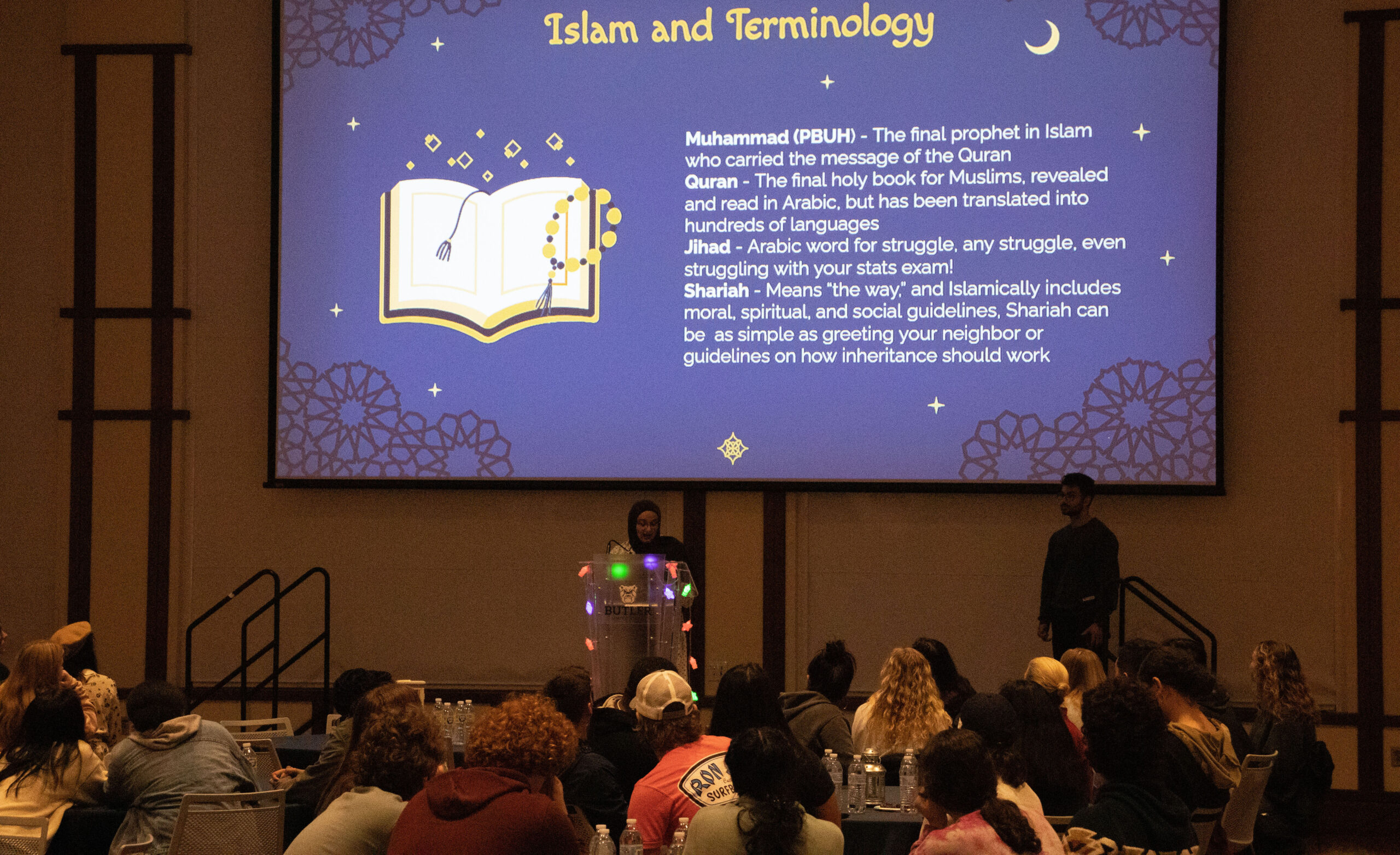 For two years, the Butler University Muslim Student Association has been waiting to host a campus-wide “fast-a-thon” and iftar celebration. This event was originally planned for 2020 but was not able to take place until this year due to COVID-19. Now – two years later – the MSA has finally been able to host this event for the first time.

Iftar is the breaking of the fast during Ramadan, a month of reflection and celebration to commemorate when Muhammed received the Quran. The Quran is the holy book for Islam, so Ramadan is very important to the religion. During this month, Muslims abstain from all food and drink from sunrise to sundown.

On April 11, the MSA fast-a-thon became an opportunity for non-Muslims on Butler’s campus to share in this experience. According to Yossra Daiya, a sophomore political science and psychology double major and MSA president, around 25 non-MSA members fasted and around 100 non-MSA members attended the iftar event.

Daiya said that the MSA was excited to share this experience and information with so many peers.

“A lot of the people that I talked to have never met a Muslim before, so I think just exposure to what Islam is can be important,” Daiya said. “Then, when Ramadan comes around next year, people already know what it is.”

The day of fasting culminated in the iftar celebration that night. The celebration started with presentations about Ramadan and Islam. The presentations detailed important Islamic terminology and beliefs, as well as an explanation about what Ramadan is and why Muslims fast during Ramadan.

Katie Stanley, a sophomore psychology and religious studies double major, fasted and attended the iftar event. She said that she loved the opportunity to learn and engage conversations about culture.

“I love the idea of cultural exchange,” Stanley said. “It’s part of the reason why I was interested in coming to Butler as a whole. This is the kind of holistic student experience that Butler markets so much of, and it’s truly the kind of experience I’ve never been able to have before.”

After the presentations were over and the sun went down, attendees celebrated the breaking of the fast with food from different majority-Muslim countries. The event was catered by PitaLand, a local Muslim-owned restaurant that makes Mediterranean cuisine. A common tradition is to break the fast by eating dates because Muhammed broke his fasts with ripe dates before praying, and due to their connection with Muhammed, dates are a staple in many Muslim households. The meal included dates to share this tradition, as well as kabobs, falafel, Mediterranean salad and baklawa.

Daiya said an important aspect of iftar is the community that it creates, and that sharing food and conversation is a major part of Ramadan.

“A big part of Ramadan is sharing food with your neighbors, so we’re sharing with our neighbors on Butler’s campus,” Daiya said. “Sitting down to share food and have a conversation with them is a really big part of the culture of Ramadan and [Islam] as well.”

The MSA was excited to hear that many people enjoyed the event. Zayd Almaya, a first-year biology major, said before the event that many non-Muslim students liked the idea.

“A lot of [students] have been very passionate about it,” Almaya said. “Most of the [participants] are trying to fully fast, and I think it would be a really nice event for people to try and see what it’s like.”

To learn about the MSA and its future events, check out the MSA Instagram @msabutler.

Students gathered on Monday night in the Riley room to participate in a campus-wide fast-a-thon hosted by the Muslim Student Association. Students who attended the event learned about the celebration of Ramadan and Iftar the breaking of the fast while eating food catered by PitaLand. Photos by Ben Caylor.