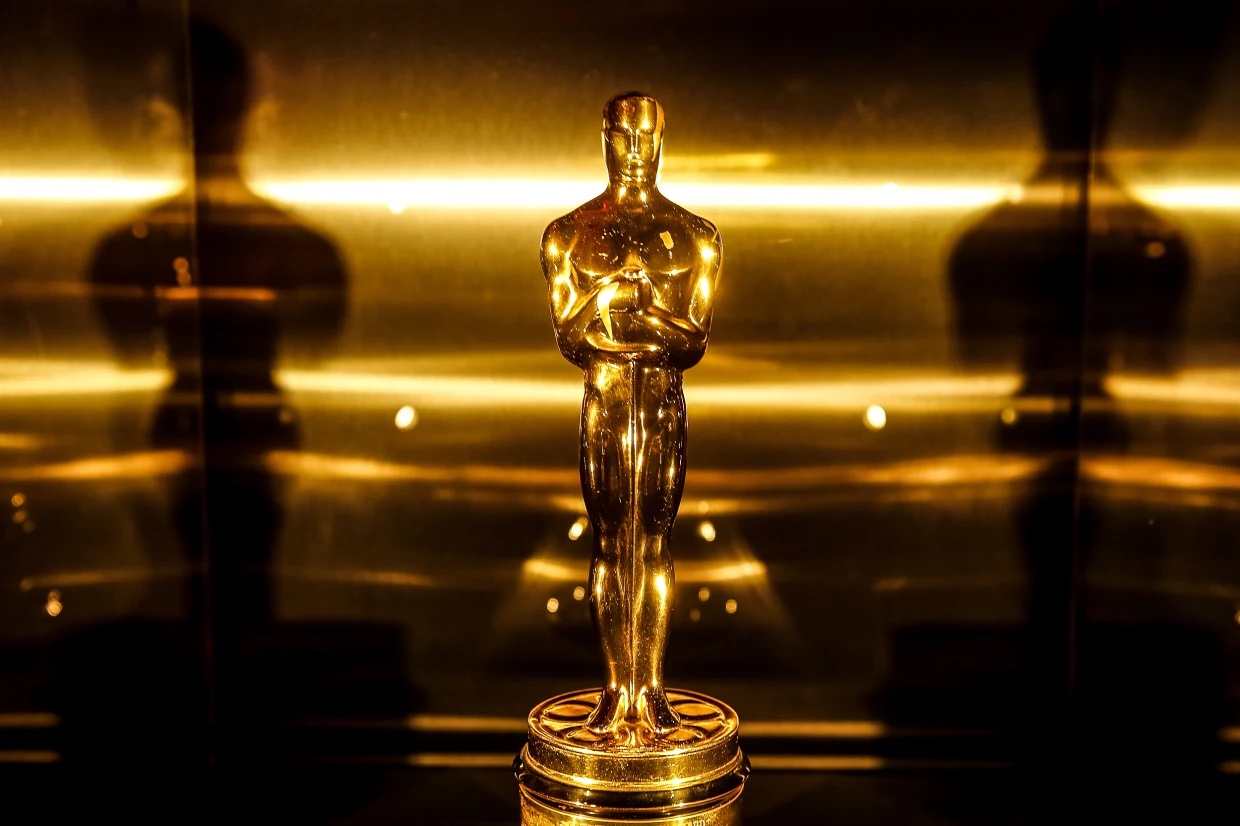 The golden trophies decorated some of the best films of the last year. Photo courtesy of Carlo Allegri.

The 94th Academy Awards took place on Sunday, March 27, 2022. Hosted by Regina Hall, Wanda Sykes and Amy Schumer, the ceremony set out to award some of the best films from 2021. However, controversy also surrounded the award ceremony before, during and after the awards.

When it was announced earlier this year that the craft awards would initially not be televised, many film lovers raised questions in anger as to why. The craft awards consist of awards like hair and makeup, score, editing and production design, along with all the short film categories were also not televised.

The outrage surrounding this decision was immediate. Some called it “insulting” and “disrespectful” because people felt as though the Oscars were not giving these important awards their proper due. The Academy has struggled with viewership in recent years, so many thought these awards were cut to keep the pace quicker.

However, following the backlash regarding the cuts, the Academy aired the winners of these awards and a shortened version of their prerecorded acceptance speeches during the broadcast.

This year’s show marked a significant jump in viewership compared to last year’s lowest-rated Oscars ever. However, besides the cut awards, another controversy could be responsible for the ratings.

The slap heard around the world

Roughly halfway through the ceremony, comedian Chris Rock arrived on stage to present the award for Best Documentary Feature, and during his presentation, he began making jokes about the audience. An awkward silence fell when he said Jada Pinkett Smith resembled G.I. Jane, both of whom sported shaved heads. Pinkett Smith has previously been open about her struggle with hair loss and alopecia, which Rock was allegedly unaware of.

Following this, Will Smith climbed on stage and slapped Rock on live television. After returning to his seat, he began shouting “keep my wife’s name out of your f*cking mouth” loud enough to be picked up by nearby mics, a moment that was heavily censored on the American broadcast but played in full in other countries’ programs. Rock continued to present the documentary award to “Summer of Soul (..Or When the Revolution Could Not be Televised),” while Smith returned to the stage later in the night to accept the award for Best Lead Actor for his role in “King Richard.”

The incident went on to become the week’s biggest meme, with some claiming the stunt was planned or was an effort to bolster ratings. The internet and conversation seem divided over who was in the wrong. Many said Smith crossed the line and should be prosecuted legally, while others claimed Rock crossed the line and that the comment was not in good taste, considering Pinkett Smith’s history with her hair.

One must also consider the role that race plays in the subsequent coverage and reaction of the situation. Words like “assault” or “strike” describing the slap paint Smith as highly aggressive or angry, a negative stereotype that has surrounded Black men for ages. Also, reports say Smith may be required to give his Oscar back for the incident, yet white men such as Woody Allen — who sexually abused and groomed his daughter — and Harvey Weinstein —  who was accused of sexual assault by over 80 women — still hold a combined 85 Academy Awards. Smith announced Friday that he will be resigning from the Academy of Motion Picture Arts and Sciences, meaning he will have no say in what films can be nominated or will win in the future.

Race could also play a role in the joke itself, especially considering this is not Rock’s first racially-charged joke at movie’s biggest night. Black women’s hair has been the subject of discussion for years. White women have appropriated box braids, cornrows and Bantu knots to society’s acceptance and even praise; on the other hand, schools ban historically Black hairstyles for young Black girls, a mode of tool of white supremacy held over from white slave owners controlling Black hair.

Solange’s song “Don’t Touch My Hair” encapsulates some of the struggles Black women face with Black hair juxtaposed with with the personal pride and meaning they possess in their hair. Black women have been open about their experiences of people asking to touch their hair, and how Black women care or treat their hair is not a public good or a political protest. Following Rock’s comment, there has been an outcry to stop commenting on Black women’s hair.

As mentioned earlier, Smith won his first Oscar for his role in “King Richard” as Richard Williams, the father of tennis stars Venus and Serena Williams.

Jessica Chastain won her first Oscar for her portrayal of progressive televangelist Tammy Faye Baker in “The Eyes of Tammy Faye,” which she also produced. The film also received the award for Best Hair and Makeup. It is Chastain’s first acting award after three nominations. During her speech, she spoke of Faye, whose liberal politics included acceptance of gay rights during the AIDS crisis and the new homophobic and transphobic legislation sweeping the nation.

Ariana DeBose won her first Oscar for her role as Anita in “West Side Story.” Her win came 60 years after Rita Moreno won an Oscar for the same role in the 1961 film adaptation. Following her win, first-year health sciences major Cate Howard thought DeBose was the perfect Anita.

“She truly embodied the woman that Anita is,” Howard said. “[Anita] was a woman ahead of her time. She embodied everything that Anita is supposed to be: strong, emotional, smart, resilient, hopeful and optimistic.”

DeBose’s speech consisted of her proudly stating her identity as a queer Afro-Latina. Howard also found this to be history-making.

“Better representation is the basis of acceptance,” Howard said. “You can’t expect society to change if media doesn’t change. The fact that she’s able to proudly say that and get love for it  has a lot to say about the growth that we’ve had as a society since even the creation of ‘West Side Story.’”

Another big winner that bolstered diversity and representation was Best Picture winner “CODA.”

The film depicts a young girl living with deaf parents while she pursues her passion for singing. CODA stands for “child of deaf adults.” The film showcases not only familial struggles but also how CODAs interact with their family. Troy Kotsur was awarded Best Supporting Actor for his role in the film “CODA.” This made him the second deaf actor to win an Academy Award, with the first being Marlee Matlin, who also stars in “CODA.”

Andrew Krivsky, a senior international business and marketing major, appreciated the simplicity of “CODA” and was happy to see it earn the night’s highest honor.

“[‘CODA’] was just a solid movie,” Krivsky said. “All the characters were so likable, and the performances were great. It wasn’t the most ambitious movie out there, but I think that it was really deserving [of Best Picture].”

“CODA” — an Apple TV+ production — marks the first time ever that Best Picture has been awarded to a film made by a streaming service. This has the potential to shake up the film and streaming industries in new ways, something that Krivsky sees as a positive.

“I just think it means people are taking streaming service movies more seriously,” Krivsky said. “I think it’s cool to see that [these types of films] still matter and can compete with the bigger movies [made by other studios].”

“The Power of the Dog” — another film made by a streamer, this time Netflix — also made huge strides during the ceremony. Jane Campion, the film’s director, became the third woman in history to win the award for Best Director. She was previously nominated for the award but did not win in 1994 for “The Piano.”

Japanese film “Drive My Car” — directed by Ryusuke Hamaguchi — received love from the Academy on Oscar Sunday as well. It was nominated for Best Picture, Director, Adapted Screenplay and International Film, the last of which it won.

Emily Kacpura, a senior risk management and insurance major, was thrilled to see “Drive My Car” take home an award and praised other nominated international films like “The Worst Person in the World.”

“International films like ‘Drive My Car’ and ‘The Worst Person in the World’ really open one’s mind to what can be done on film because we’re so used to our American perspectives,” Kacupra said. “When you go into the foreign film landscape, you don’t always know what you’re going to get, which makes for some really interesting films.”

It is hard to predict what’s in store for the future of the Oscars or which films will win big at next year’s ceremony, as many have yet to be released or even announced. Only time will tell what the Academy will do to try to regain viewers while keeping the show entertaining. One thing is for certain, though: filmmakers from around the globe will continue to push the boundaries of cinema and create exciting movies that move people and touch their hearts. Some might say that power is worth more than any little gold statue.