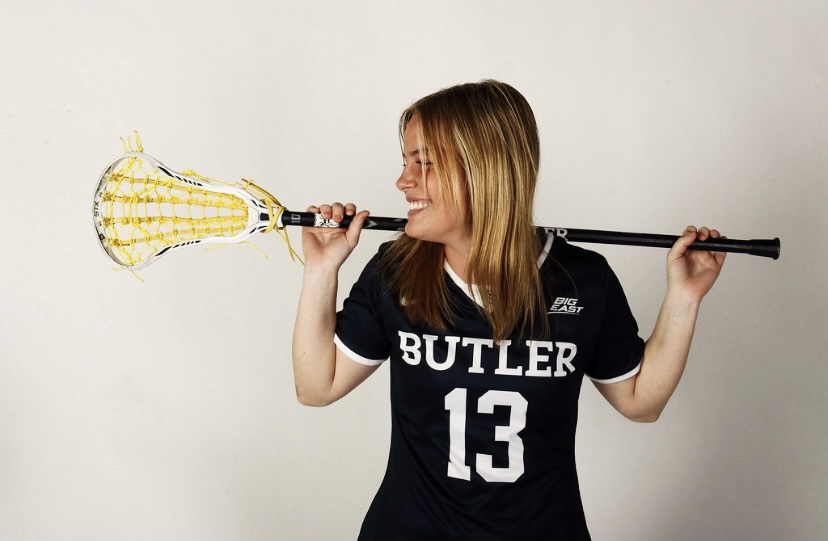 Junior attacker Campbell Connors currently leads the Butler women’s lacrosse team with 31 goals and 38 points. Conners broke the all-time program record for goals in a single-season against the University of Denver on April 4. Photo courtesy of Butler Athletics.

After five years of Butler lacrosse attempting to find its way, a breakout season is here, and Campbell Connors is setting new records and bringing out the best in herself and her teammates. Since Connors became a Bulldog in 2019, she has played in every single game and has started all of them so far in 2022.

Connors’ play on the field has been impressive, as she has scored a goal in all but one game and has 31 goals on the season. Her 31 goals lead the team and is tied for fifth in the Big East. That total is already a single-season record for Butler lacrosse, and there are still three more regular season games to play. Along with having a nose for the back of the net, she has also managed to rack up seven assists on the season – showing her versatility as an attacker.

Kaley Attaway, junior midfielder and Connors’ roommate for the past three years, said that Connors possesses game-changing abilities when she’s on the field. Attaway emphasized that Connors’ free-flowing nature adds an eye-catching element in her craft.

“She has true talent that not a lot of people have,” Attaway said. “The way she can score is beautiful to watch. You don’t see that often. She goes out there and has fun. She plays freely and ends up making sick goals and is so creative with how she moves the ball on offense.”

Connors’ success this year has long been in the making since her first collegiate season in 2020. She started her career by scoring seven goals in the shortened season, then followed it up by leading the team with 12 goals in 2021. Now during her first full season, she has hit her stride — scoring at least three goals in five games so far.

While Connors’ production this season has shown that she is a top attacker in the Big East, she gives all the credit for her success to her teammates.

Connors added that her personal goals are more in line with the team being successful in the Big East conference, rather than individual accolades.

“I want to help lead the team towards winning our first Big East game,” Connors said. “Going to the Big East tournament would be really cool and I think we have the depth to do that.”

Her team-first mindset has been taken notice by her peers, as Attaway recognizes her as being the gold standard of a team player.

“She is totally a true teammate,” Attaway said. “She just wants to win and always has everyone’s back, and is your biggest supporter no matter what.”

Despite already setting the team’s single-season record for goals three-quarters the way through the season, Connors continues to push herself to be the best version that she can be.

One area that she continues to improve on is her role as a leader on the field. Connors has embraced her role as the leading attacker and being an outlet that her teammates can turn to when they might be struggling on the field.

“I always make it to where my teammates feel comfortable coming to me,” Connors said. “I feel like I have a voice on the field and my teammates look up to me on the attack. People will come to me for advice on what they can do better. I try to help them and I feel like I certainly have a role to play in trying to be someone on the field that my teammates can come to anytime they need to.”

Connors’ strength of being someone that others can connect with has helped her create deep bonds with many of her teammates.

Junior attacker Greer Bireley first met Connors during a lacrosse camp held at Butler when the two were still in high school. Bireley said that as soon as the two got to campus, Connors became one of her best friends.

Throughout their friendship, Brieley has found that Connors is as authentic off the field as she is on the field.

“She is such a nice person and good friend,” Bireley said. “People, no matter what age they are on the team, can go to her and ask her questions on just about anything. Everyone feels comfortable around her and they know she is willing to help them.”

Their deep personal connection off the field extends onto the field of play, as Bireley describes that when they’re in heat of the moment — they are still perfectly in sync.

“If I’m passing to her when she’s trying to go to the goal, we don’t even have to say anything,” Bireley said. “She can just give me a look, and I instantly know if I should pass it to her or not.”

Senior midfielder Gab Bodine also shares a deep connection with Connors. Bodine said their bond allows them to work together through adversity effectively.

“Campbell and I are really good friends and I think it has helped our team,” Bodine said.” We are on the same page and can adjust very quickly in the middle of the game if something isn’t working because of how close we are.”

Connors’ friendships and connections with her teammates has been a huge part of the Dawgs success this year. The team has become a well-oiled machine on offense, breaking their previous record of goals scored in season with three games still remaining.

The meaningful relationships between players is an aspect of the team’s culture that led to Connors choosing to become a Bulldog. The team camaraderie she felt has had a lasting impact on who she is and how she wants to treat her new teammates every year.

“Meeting the team for the first time was awesome,” Connors said. “I loved the team. Everyone was so welcoming and everyone was a great person. That’s who I want to be for the underclassmen, since I am now an older player on the team.”

Another reason for Connors’ decision to choose Butler was the school’s focus on not just athletics, but the importance of academics and life after lacrosse.

“I wanted to go to a school that valued academics,” Connors said. “I thought that the recognition of life after college not revolving around athletics was a big deal for me. The focus of the right balance of academics and lacrosse was exactly what I wanted.”

Butler lacrosse has benefited greatly from Connors making the decision to play for the program. While the team has eyes on a strong finish and their first Big East win in program history since joining the conference, they should also be looking forward to the future.

The program has a bright future ahead of them and a major key for that will be the return of their leading goal scorer in Connors next season. The only question will be what Connors will do for an encore after her record-breaking season.