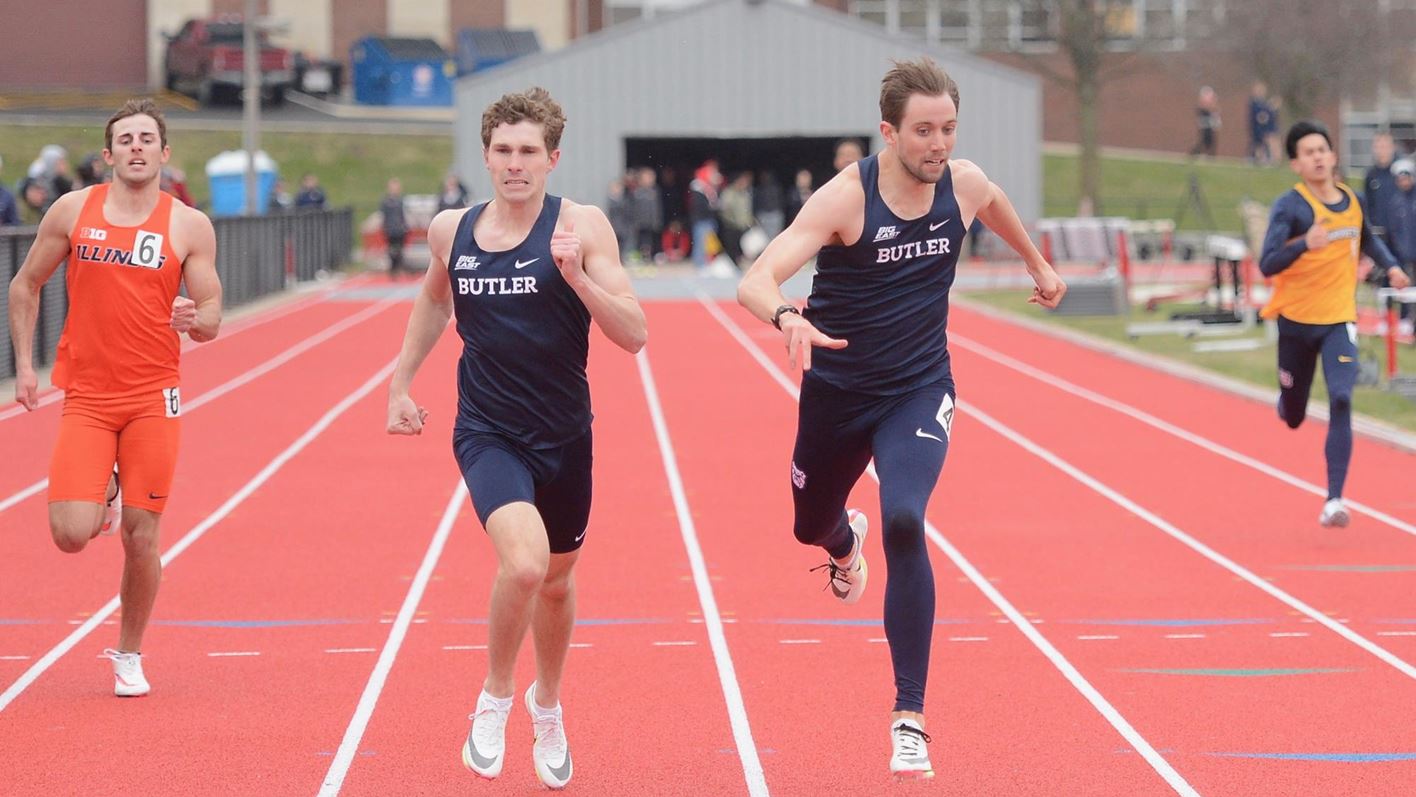 Sophomore Zac Stanley and graduate student Tom Pitkin race each other to the finish line of the 400 meter race at the Redbird Invitational on April 22. Photo courtesy of Butler Athletics.

After a three-game home series against UConn, Butler softball travels southwest to Terre Haute to face off against the Indiana State Sycamores. The Sycamores have an overall record of 17-14 this season while the Bulldogs are currently 19-12. First pitch is at 4 p.m. and will be streaming on ESPN+.

Butler track and field heads to Champaign, Illinois to compete in the Illini Classic. The Bulldogs are coming off of a successful meet at the Redbird Invitational in Normal, Illinois, where Tom Pitkin, Zac Stanley and Michael Beros swept the podium in the 400 meter race in that order. Barry Keane will also run in his first meet since he was named Big East Men’s Track Athlete of the Week on March 29 for his 10,000 meter performance at the Raleigh Relays.

Following a loss to the University of Illinois on April 3, Butler men’s tennis will square off against Xavier in Cincinnati, Ohio. The two teams should be evenly matched with nearly identical records this season. The Musketeers are 10-6 overall and 2-0 in conference play, while the Bulldogs are 10-8 overall and 2-1 in conference play.

Following their matchup in Terre Haute, Butler softball will head to Queens, New York to play the first of a three-game series against St. John’s. The Red Storm are 8-25 overall this season and 3-9 in conference play. The Bulldogs have a 7-4 conference record heading into the series. The game begins at 2 p.m. and can be watched on ESPN3.

Butler baseball heads to Villanova, Pennsylvania for the first of a three-game weekend series against the Wildcats. This will be the Bulldogs’ first conference game of the season. Villanova is 9-15-1 on the season with a 1-2 conference record thus far. The Bulldogs are 14-15 overall heading into the series. The game begins at 3 p.m. and can be watched on Flosports and the Big East Digital Network.

Butler track and field will wrap up their competition on the final day of the Illini Classic.

The Butler men’s golf team will head to West Lafayette to play in the Boilermaker Invitational. In their last tournament, the Butler Spring Invitational, the Bulldogs finished second out of 12 teams. The team will look to carry that momentum into this weekend’s two-day tournament.

Butler baseball will play their second game of the series against Villanova. First pitch is at 1 p.m.

Butler softball will play their second of three games against St. John’s. The game begins at 1 p.m. and can be watched on ESPN3.

Butler men’s golf will compete in their second and final day of competition in West Lafayette.

Butler softball will play their final game of the weekend series against St. John’s. The game begins at 1 p.m. and will be broadcasted on ESPN3.

After their match against Xavier, Butler men’s tennis will travel to Chicago, Illinois to play DePaul. The Blue Demons are currently 8-11 on the season and have a 3-0 conference record. The match begins at 2:15 p.m.

Butler women’s tennis heads to Cincinnati, Ohio for their penultimate match before the Big East tournament. The Bulldogs are coming off of a 6-1 win over IUPUI on March 30 that put the team at 7-12 on the season. Xavier is currently 9-8 this season. The match starts at 3 p.m.

Butler softball returns home to play the University of Illinois Chicago at the Butler softball fields. UIC is currently 6-19 overall, while the Bulldogs are 19-12. The game begins at 4 p.m. and can be streamed on Flosports and Butler+.

Following their series in Villanova, Butler baseball will square off against Evansville at Bulldog Park. Evansville is currently 14-14 on the season and riding a four-game winning streak. The game begins at 4 p.m. and can be watched on Flosports and Butler+.