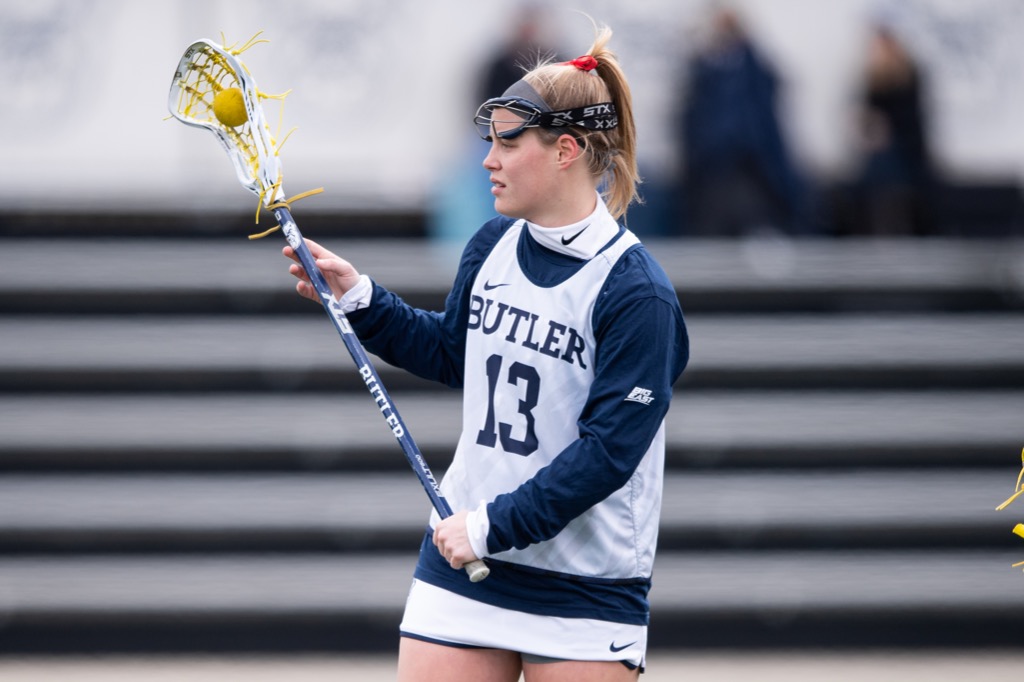 Junior attacker Campbell Connors warms up before the game against Denver this season. Connors currently leads the team with 31 goals and 38 points. Photo courtesy of Butler Athletics.

After recording their most convincing win of the season by defeating Saint Ambrose by a score of 21-2 on April 5th, the Bulldogs struggled heavily against Big East opponent Georgetown — falling to the Hoyas 17-7.

The scoring for Georgetown started right away as Tatum Geist found the back of the net just 27 seconds into the first quarter. Just over three minutes later, Erin Bakes tallied a goal of her own off the assist from Mary Pagano to give Georgetown a 2-0 lead. Pagano took over shortly after, scoring three of Georgetown’s next four goals, with her last one finding the back of the net with just over two minutes left in the first quarter — giving Georgetown a 6-0 lead.

Lindsey Schreiber helped the Bulldogs end their scoring drought, tallying her 21st goal of the season with less than a minute left in the first.

Georgetown continued their onslaught by striking first in the second quarter with Emma Gebhart finding the back of the net off an assist from Bakesa a little less than two minutes in, stopping any chance of a run from the Bulldogs.

Campbell Connors responded for Butler, recording her team leading 31st goal of the season with 11:36 left in the second, closing the gap to 7-2.

Following Butler’s final goal of the half, Georgetown rattled off four straight goals — three of which from Bakes — leaving the Bulldogs trailing 11-2 at halftime.

The Bulldogs striked first in the third quarter, with Schreiber tallying her second of the day off the assist from Connors. After Georgetown responded with consecutive goals from Pagano and Jordyn Sabourin, respectively, the Bulldogs followed it up with three straight goals of their own, two from Gabryelle Bodine and one from Schreiber to make the score 13-6. The Bulldogs never got closer than seven again, and ended up losing 17-7.

Pagano finished with four goals and one assist on the day, and Bakes had five goals and an assist for the Hoyas.

Schreiber finished with three goals to lead the Bulldogs and Bodine had two.

The Bulldogs’ next game is on Saturday, April 16th at 1 p.m., where they will travel to Milwaukee to take on Marquette.