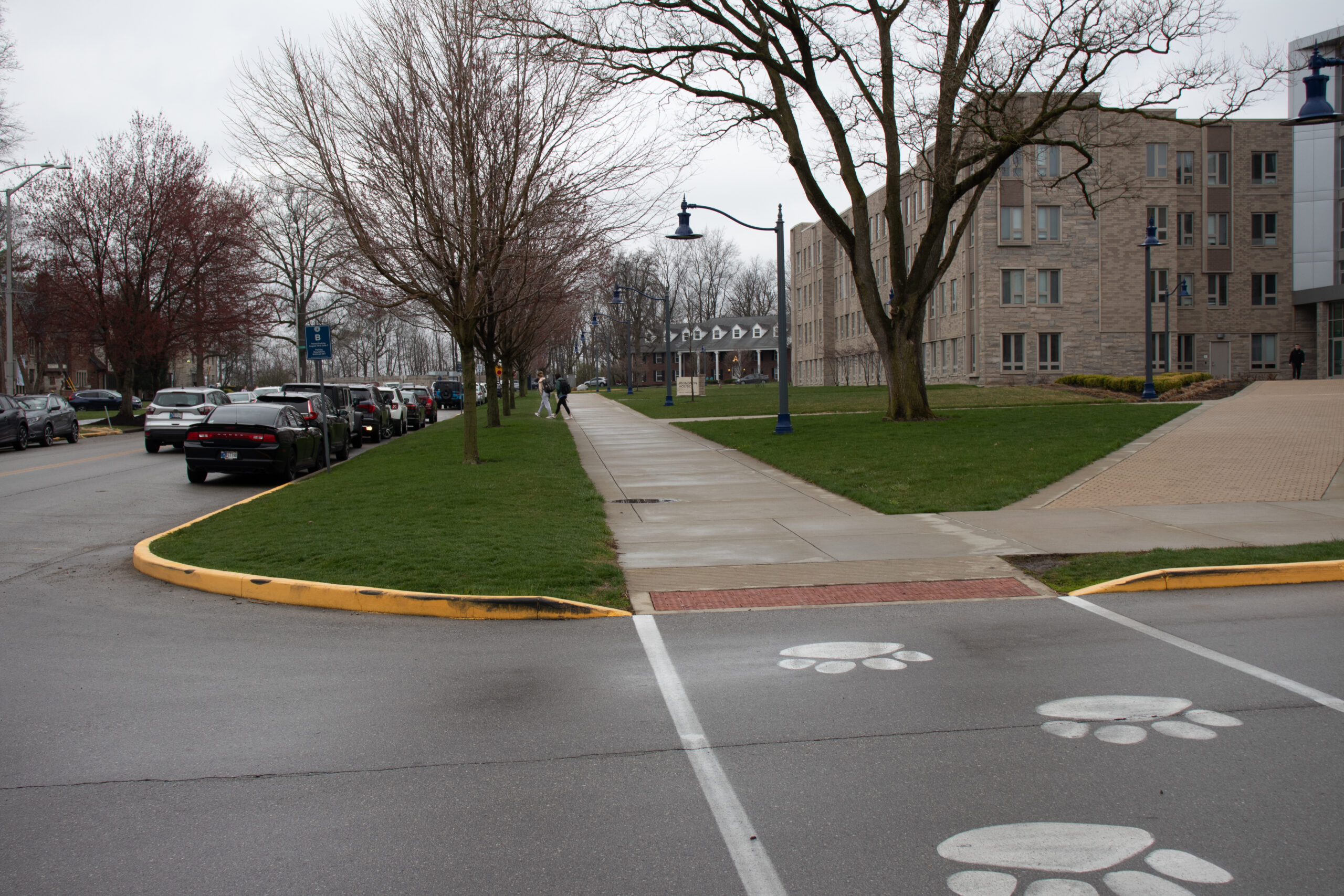 Large curbs located around Butlers campus are proving to be difficult for students that need wheelchair accessibility when getting to and from class. Unknown to many students, many curbs around campus are too tall or leave stagnant water making them difficult to maneuver. Photo by Ben Caylor.

Bulldogs for Universal Design met with administration on April 1 to address accessibility on campus. The group was created earlier this semester with the goal of protecting the rights of disabled students at Butler through advocacy, education and allyship.

The purpose of the meeting last week was to discuss curb cuts on campus. According to BUD President Becca Matson, a sophomore elementary education major, curb cuts are places where curbs are too tall for wheelchairs to easily move over. Matson said curbs between Lilly Hall and Clowes Memorial Hall are examples of inaccessible curbs.

Although these curbs are technically compliant with the Americans with Disabilities Act, Matson said the ADA only requires a bare minimum level of accessibility. Matson, who is a wheelchair user, said curb cuts that may not be noticed by able-bodied students could be problematic for wheelchair users.

“It doesn’t seem like a big deal if you can step over it,” Matson said. “But for someone who uses a wheelchair, I can’t use that in my manual wheelchair, and in my power wheelchair I have to be really, really careful.”

In addition to issues presented by curbs that are too steep or the wrong height, Matson said drainage issues that lead to standing water on walkways pose a problem for wheelchair users. She also said there is a lack of tactile paving, the raised red bumps on sidewalk corners that alert people that they are about to cross the street. Tactile paving is used for people who are blind, visually-impaired or in wheelchairs to know when they are approaching a street.

BUD identified inaccessible curb cuts and made a map which they sent to a number of administrators. Matson said the group contacted administrators in Student Disability Services, University Operations and Student Government Association members. She said the group was willing to talk to anyone that might have influence over the situation.

At the meeting last week, Matson said operations administrative manager John Lacheta was receptive to BUD’s needs, agreeing to coordinate the prompt adjustment of curb cuts to improve accessibility on campus. According to Matson, Lacheta said the operations team was facing staffing issues. Therefore, they were unable to provide a definite timeline, but they said they would continue to communicate with BUD about changes in the future.

Matson said curb cuts are just the start for BUD. In the future, the group seeks to address other issues like fixing elevators, adding braille to signs on campus and removing ableist philosophies from curriculum at Butler. BUD collects student concerns regarding accessibility on campus using a form to then decide which issues to bring to administration’s attention. Matson said BUD had a few ideas of what to address first, but group members decided on curb cuts.

“It’ll affect everybody, actually,” Geerts said. “It will give [Butler] more opportunities for people with disabilities to want to come. If you are touring on campus and you notice all these things that are inaccessible you’re probably not going to want to come to campus if you already have a disability. That’s probably something you would notice right away.”

A key part of universal design is that it works to benefit both disabled and able-bodied students. Sophomore elementary education major Gracie Moore said working with BUD was important to her, even though she is able-bodied. She said making sure her friends who have disabilities have equitable opportunities at Butler inspired her to join BUD.

“Personally, I am able-bodied, so I can get anywhere easily which is a blessing,” Moore said. “But I have friends and people I care about that aren’t, so it would make their lives easier, which would impact me in the sense of knowing that my friends have equal opportunities to get places.”

Moore said people who are interested in joining BUD can look for more information on their Instagram @budatbutler.