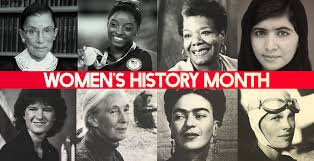 Throughout the month organizations on and off campus will celebrate the global influence of women. Photo courtesy of njsacc.org.

March 1 marks the beginning of Women’s History Month, and while Butler has yet to announce any events being hosted on campus to celebrate, some students are finding their own ways to honor the achievements of women around the world.

This year’s theme of Women’s History Month, “Women Providing Healing, Promoting Hope,” pays tribute to frontline workers and caregivers who have provided ongoing support during the pandemic. The National Women’s History Alliance said “the 2022 theme proudly honors those who, in both public and private life, provide healing and promote hope for the betterment of all.”

Honoring women during the month of March began in 1978 with a local celebration in Santa Rosa, California. The Women’s History Week celebration was planned and executed by the Education Task Force of the Sonoma County Commission on the Status of Women.

Most recently, on Feb. 28, President Biden recognized the importance of Women’s History Month and the issues of adversity women continue to face.

According to the Women’s History Month website, the month is a time to “celebrate the contributions women have made to the United States and recognize the specific achievements women have made over the course of American history in a variety of fields.”

Payton Greenlee, a junior risk management and insurance major, is the ambassador of the Changing Health, Attitudes and Actions to Recreate Girls, CHAARG, organization on campus. She acts as the liaison between the national headquarters of CHAARG and the Butler chapter of the organization.

Greenlee said being surrounded by strong female leaders at CHAARG has shown her the impact women can make within their leadership roles.

“I think it’s really important for girls that don’t see [women in power] as much to see that once you leave college, even once you’re in a career to see what other women do, and to see what we’ve done to grow and do what we’re doing now, to see the progress,” Greenlee said.

According to the Butler events calendar, there are no events planned by the university to celebrate Women’s History Month.

Some women around campus, such as Ella Junker, a first-year exploratory business major, think events on campus would be a good way to honor women this month.

“Historically women have not always been treated in the most proper way and people don’t always see all of the big impacts that they have on both the community and the family, and just celebrate women and moms for supporting everyone,” Junker said.

Mia Beer, a first-year criminology and psychology major, said if Butler were to host an event, she would attend.

“It would be super cool just to see a bunch of female leaders and just to see how they got there, like a presentation or a Ted Talk,” Beer said.

It’s clear that Butler students are planning to participate in Women’s History Month, regardless of the university’s plans for the celebration.