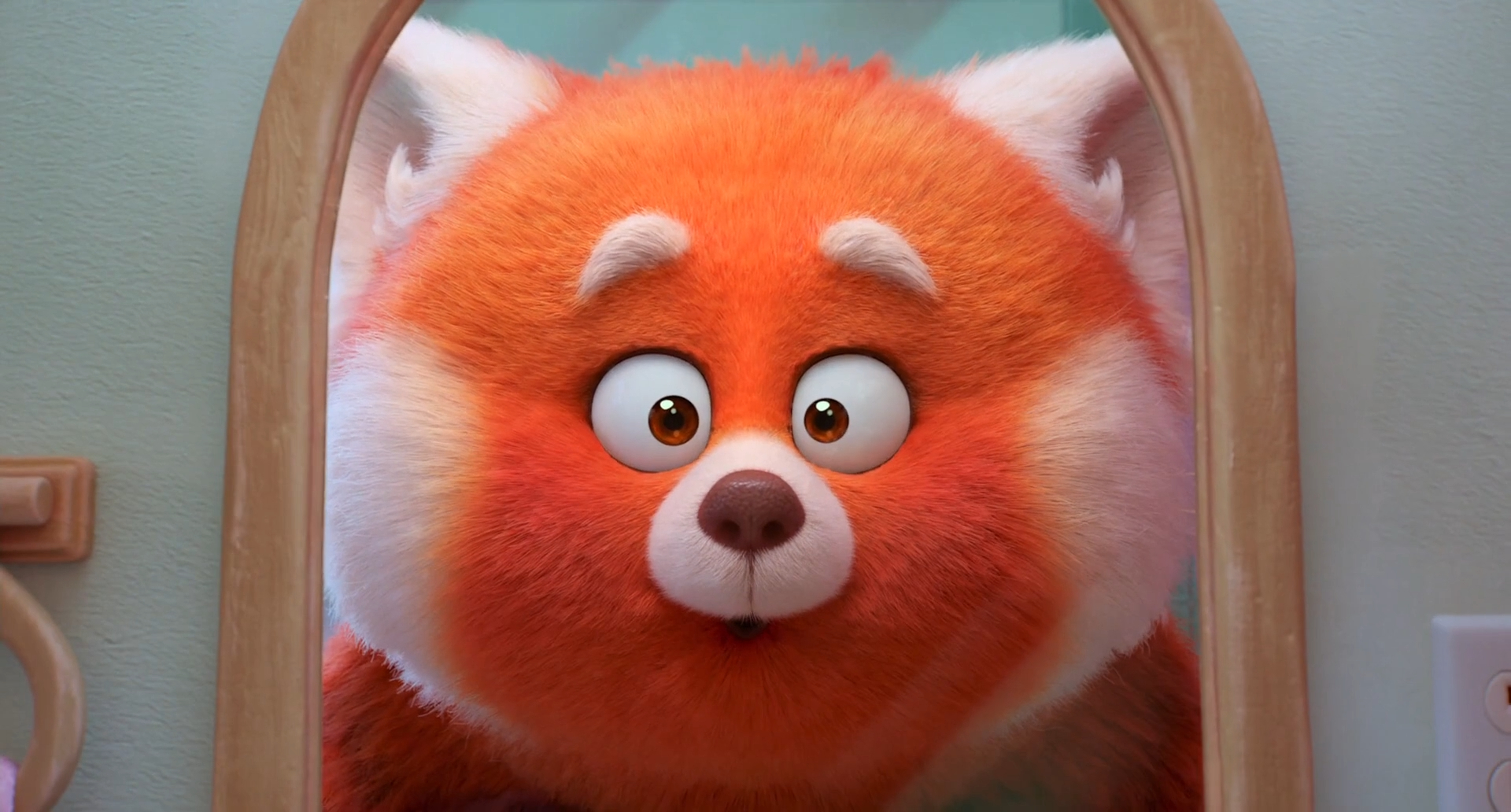 “Turning Red”’s Mei and her adventure caused a stir since its release. Photo courtesy of Disney-Pixar.

Pixar’s latest film “Turning Red” unleashed onto the world on March 11, 2022 with — just like a teenage girl transforming into a red panda — layers of impact.

The animated feature stars Mei, a 13 year old living in Toronto, Canada in 2003. With an obsession of the boy band 4*Town and a love for drawing anime in her notebooks, she is an average pre-teen girl. However, her life changes when an ancestral spell changes her into a giant red panda when she feels strong emotions. Her struggle to hide her secret from her friends while also navigating her parent’s well-intentioned help becomes Mei’s biggest struggle throughout the film.

The film was released exclusively on Disney+ on March 11, 2022. The movie was a critical success with a Metacritic score of 83 and a Must-See namesake, a name given to acclaimed films on the platform. It also garnered a 94% rating on Rotten Tomatoes, earning a “Certified Fresh” seal reserved for the site’s top films.

The story of Mei and her secret red panda identity work on many different textual levels. The main lesson the film tries to convey is how to control your emotions and process how you feel before acting out in anger or embarrassment.

The film is also a metaphor for puberty. Throughout the film, Mei’s fascination with boys her age becomes overwhelming, and she even questions why she begins to like Devon, who she previously found repulsive. She pushes her parents away and disobeys them, as every pubescent teen does. She prefers the company of her friends, and even the thought of her friend group can calm her down more than her parents do. Finally, she is inhibited by societal norms, fully embracing herself and being apologetic in her presentation.

Anna Marcou, a junior creative writing and critical communications and media studies double major, said this representation meant a lot to her.

“I love how realistically it depicts adolescent girls,” Marcou said. “I can’t think of the last movie I watched that lets them be their goofy, honest cringy selves … It’s so refreshing to see that kind of representation in such an honest way that isn’t catering to any kind of weird fantasy or unrealistic expectation of girls at that age.”

Aspects of a budding teenager can be found in Mei. Being a universal ordeal nearly every person experiences, almost any viewer post-puberty can appreciate the film’s dedication to its awkwardness and cringe-worthy moments and relate it to the personal pubescent experiences.

Another metaphor the film utilizes is menstruation. Mei’s panda can be suppressed if she remains calm for a month, where a blood moon rises and she can perform a ritual to suppress the panda forever. The film is very aware of this. In fact, Mei’s mother Ming even explicitly asks if Mei needs pads. Later, Ming is seen bringing Mei a box of tampons at school. This film treats periods with an air of normalcy, significant considering that it has never been a topic of animated features before. It speaks to the recent steps towards societal normalization of periods and women’s health on a larger level.

The film has a layer of intergenerational trauma as well. Ming’s mother is shown to be overbearing and controlling of her, just as Ming is to Mei. Ming still fears her mother and is strict about making sure Mei controls her panda. After Ming unleashes her own panda, Mei even helps her mother transform back to a human.

The film shows that this repressing behavior can become instinctual in families and create toxic dynamics at every generation. By not repressing, Mei is trying to break the cycle that has plagued her family. This cycle is especially pertinent to the community represented in the film. A cycle of generational trauma is known to be a part of some Asian families, in which the children need to heal from the way their parents treated them.

Finally, Mei’s panda also represents her identity. As a Chinese Canadian, Mei feels at odds with her culture. Frederic Chen, an Asian American YouTuber, points out in their video on “Turning Red” that the film states how the ability to transform into a red panda was a blessing in China but became a hindrance in the Western world. Mei is taught to suppress her panda by her parents who want her to assimilate for her future success. However, Mei learns to accept her panda, showing she is forming her own identity as someone both Canadian and Chinese. Many people behind the film, voice actors and production alike, came forward after the release to express how excited they were to see their stories shared on screen.

For an animated movie with layers upon layers of subtext, it may come as a shock to see the controversy it has garnered.

The discourse around “Turning Red” began when white CinemaBlend editor Sean O’Connell wrote a review, docking the film for catering to too specific of an audience. Throughout the review, he alludes to the female audience multiple times or compares it to the white-male-led “Teen Wolf.” Finally, he ends the review with, “There’s an audience out there for ‘Turning Red.’ And when that audience finds the movie, I’ve no doubt they will celebrate it for the unique animal that it is. In my opinion, however, that audience is relatively small, and I’m not part of it.”

The review sparked an immediate backlash, with some calling it “racist” and “sexist.” Senior English major Lousie Irpino said the review is short-sighted.

“It’s a really close-minded take,” Irpino said. “I feel like there’s no water to that argument. You can just tell it’s coming from a white man who has no concept of what it’s like to be a girl growing up and going through puberty … Just because a movie is about a specific group of people doesn’t mean you can’t relate to it.”

More reviews from concerned parents flooded in after, calling the film offensive for teaching children to disobey their parents and that Mei is unlikable or cringeworthy for her behavior towards the world around her.

The film was the subject of other talking points, including the language used. Parents found multiple things as offensive, like the subject of menstruation and the normalization of it, Mei’s drawings of her crush or the use of the word “sexy” and “crap.” They also complained that Mei was acting out and that she should be listening to her parents.

The more damning controversy came when parents were upset about the use of traditional Chinese spirituality in the film. Several Facebook posts went viral regarding the use of “scary” imagery in the film’s sequences where Mei tries to suppress her panda. Even a white New York pastor accused the film of “demonic” for its use of this spirituality.

With “Turning Red” being targeted this way and the film being Pixar’s first Asian-female-directed film, the massive online hate directed to the movie was unfortunately expected, according to Marcou.

“There’s pushback whenever [diversity in film] happens,” Marcou said. “Representation is happening, and people who typically don’t get to make films like that are suddenly doing it. It shows power and resistance to a long-held standard and norm [of white-led-white-directed films] that needs to be upended … It’s criticism that at the surface level is trying to pretend it’s about the film itself but is really just resistant to any kind of new representation.”

Rosalie Chiang, the voice actress of Mei, has commented on the online hate.

“This is a coming-of-age film,” Chiang said. “Everyone goes through this change … I think different people of different cultures are going to go through it differently, but at the end of the day, the core messiness and change is something everyone can relate to.”

Irpino hopes Disney continues to make strides for this diversity in the future.

“I hope [Disney and Pixar] realize that this is what people like,” Irpino said. “It’s the same [diversity] with ‘Encanto’, and ‘Luca’ last summer, which was also controversial for the gay themes … I just hope they realize that people do like diverse stories like this … because it’s relatable to everybody.”

Despite this controversy, “Turning Red” is still an impactful film in the Pixar pantheon. With such diversity, both in its leadership and characters, it is unabashedly itself, and its creators proudly celebrate the culture it depicts. Even without the level of reverence for Chinese culture, the film stands as a retrospective of puberty, growing up and the troubles when young people find their pandas.