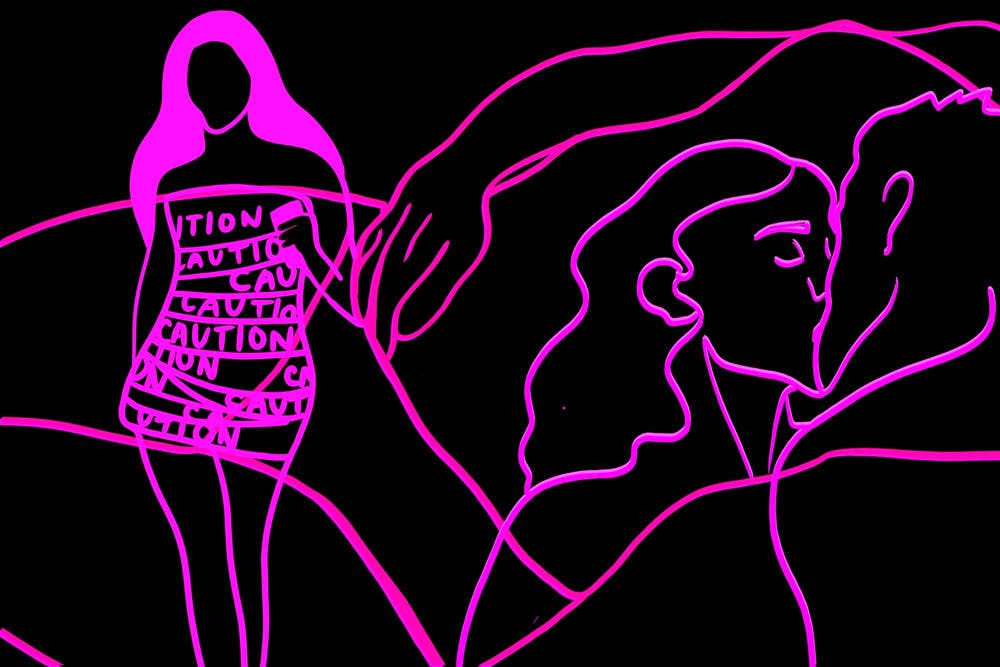 Casual sex has redefined the dating space and makes dating difficult for those who aren’t interested in immediate physical connection. Graphic courtesy of Sophie Bailey.

I don’t know about you, but personally, I’m over hookup culture and the expectations that come with it. As a single woman on a college campus, finding love seems to be an impossible task. It feels like every time I try, it’s made evident that all others are looking for is a “sneaky link” — which is simply not my cup of tea.

Listen, it’s hard in these streets for those of us who are hopeless romantics. Especially when the streets are praising casual sex and one-night stands, while perpetuating rape culture and the oversexualization of women.

Some of us are so ready and eager to commit to someone, in search of an equally emotional and physical connection — it’s me, I’m some of us. I don’t want to feel like I’m required to give my body away in exchange for eventual love.

Why do people — especially college students — tend to gravitate towards casual relationships? Anushay Ansari, a senior biology and Spanish double major, explained why she thinks hookups are so popular.

“I think it’s just easy,” Ansari said. “I think nowadays there’s so much stress around relationships and whether or not you are built for it. Most of the time people go to casual hookups because … they don’t want to put in the time investment for a proper relationship, which is why I think hookups are so easy. You don’t really have to invest too much of yourself into somebody.”

This is my dilemma, and I know I may be in the minority when I say this, but I actually want to invest myself into somebody. Yes, love and commitment can seem scary, but it all depends on how you look at it. I choose to look at it this way: I can’t rob myself of joy to avoid pain, and if I choose to ignore my feelings for someone because I’m scared of getting hurt, I’m really only hurting myself.

This isn’t the popular mindset, or at least it doesn’t seem to be. Casual relationships appear to be the more favorable option, which leaves me in a tough spot.

While I know that I’m not required to say yes to anybody, there is an immense pressure to engage in casual sexual encounters. Hookup culture has become so normalized that sex and physicality feel like an immediate expectation when two people express interest in each other. If someone fails to uphold that expectation, it feels like they’re looked down upon — because how dare someone say no to sex, especially if someone else is expecting it from you.

Jonathan Shinn, a first-year music education and vocal performance double major, spoke to his experience surrounding expectations of sex in the LGBTQ+ community as a gay man.

“It’s a lot harder to be someone who doesn’t want sex right away in the gay community,” Shinn said. “It’s hard to find someone who wants to date and who doesn’t just want you to f*ck. Every time I talked to a guy, [the] first thing is sex. And that’s not just a few instances, that’s every time.”

Immediately expecting sex from someone you’ve just started talking to is a problem within itself. This expectation could make the sexual encounter dangerous and carry the risk of assault if the partners don’t share the same ideas.

From my own experiences, I have learned that it’s important — at least for me — to know and trust the person that I choose to share myself with. I need to know that my boundaries will be respected.

Consent, in both casual and committed relationships, is crucial. Ansari spoke to the importance of consent being given by participating parties.

“Consent runs both ways,” Ansari said. “I think it is very much pushed societally that men have to be the ones to ask for consent. Whatever type of relationship you have, whoever it may be with, consent goes both ways with those two partners.”

With high rates of sexual violence on college campuses, discussions and education about consent are vital. I think hookup culture, and society in general, places everything under this scope of sexualization where female bodies are viewed and criticized solely as vessels for pleasure. As a result, this reinforces the assumption that other people have the right to a woman’s body, which should not be the case.

Another contributor to hookup culture is the male gaze— a manner of viewing women’s bodies as objects of desire, both in everyday social interaction and their representation in visual media. When we look at the media, women are portrayed as these oversexualized beings. TV, film and social media are mediums we interact with daily, and so naturally they affect the ways in which we perceive reality. The way in which women are portrayed as sexual and sexually available in the media implicitly reinforces the same expectations in real life.

Dr. Ann Savage, Butler critical communication professor and affiliate faculty member of race, gender and sexuality studies, shared how media is constructed from the perspective of the male gaze in an email to the Collegian.

“Media is produced from a mostly male perspective, hence the male gaze,” Savage said in the email. “Women are constructed [in media] to appeal to men and [encouraged] to spend money to improve their image. Women are constantly presented in sexualized ways and — more problematically — as sexually available and in need of men for happiness.”

These pressures play a role in why incidents of sexual violence towards women are normalized and the number is so high: if women are believed to only hold value as sexual beings, they get treated as such.

Whether it be the fear of rejecting sexual advances, saying no in the middle of sexual acts or the objectification of female bodies in daily life, society is built around pleasing men, and women’s pleasure and safety is an afterthought.

There’s a plethora of reasons why I don’t like hookup culture, and these are just a few of them. Sexual violence, lack of consent and the oversexualization of women are just a fraction of the issues hookup culture helps create, and they don’t get discussed enough.

On a personal level, I know I don’t like engaging in sexual interactions unless there is an established trust between my partner and I. Otherwise, I just feel used the next day. Selfishly, I’m done with empty conversations over Snapchat that only lead to being asked to “send pics.” I want people to talk to me because they enjoy me, not because they want me for a night. I don’t want sexual advances that I may or may not feel comfortable saying no to. I have more to give than that.

Even if you don’t participate in hookup culture, we are all affected by it and how it governs romantic relationships. Actually talking about hookup culture and the expectations it forces on us is the first step to redefining what we should expect from casual encounters and relationships in general.

All I want is a true, genuine connection without expectation of my body in return — and I know I’m not the only one who feels this way.