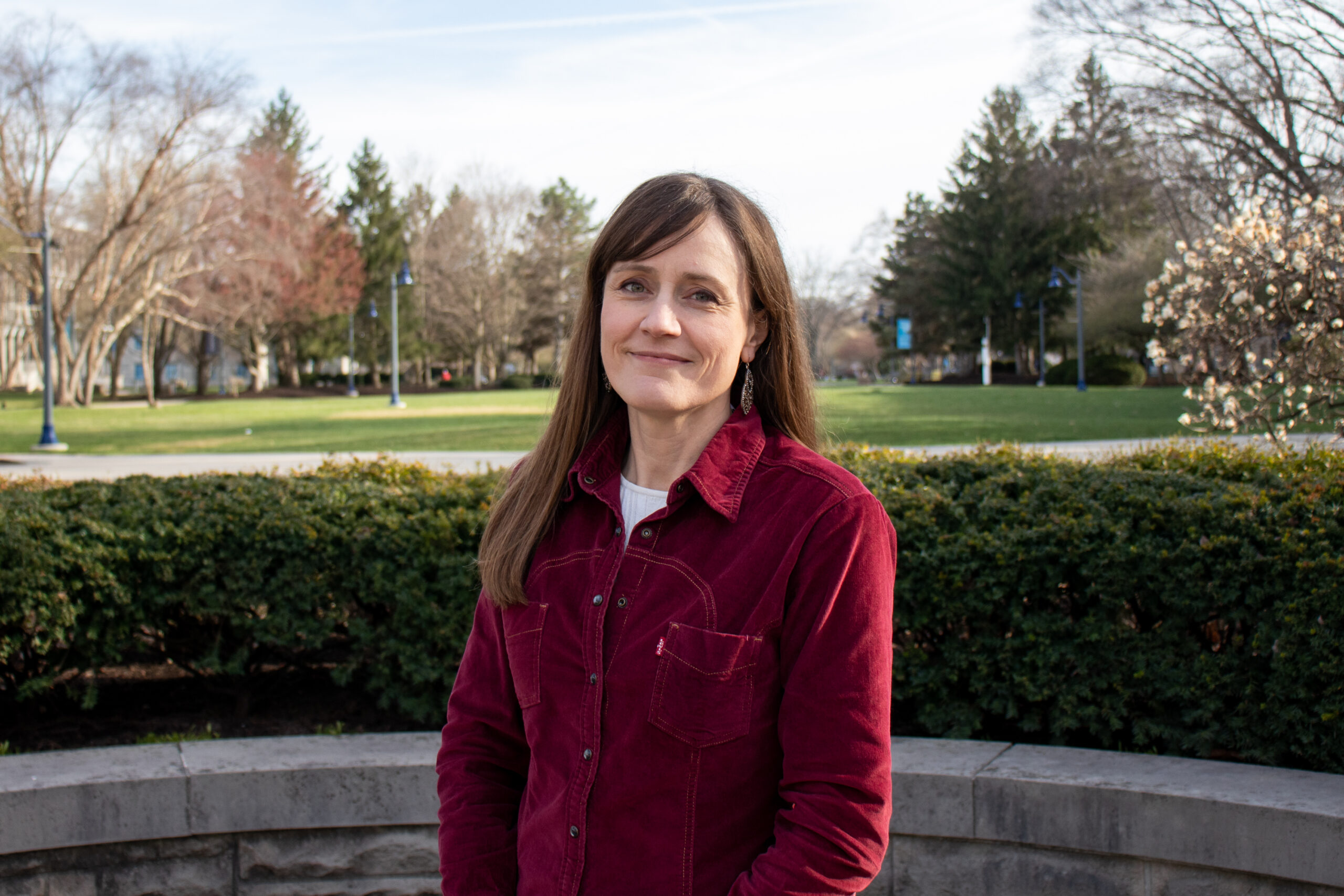 Leana Kruska brings experience from various graphic design and media jobs to the Butler classroom. Now in her second semester as an adjunct professor in Butler’s College of Communication, Kruska hopes to share tips she’s learned from her current and previous roles with students.

Kruska began as an adjunct professor teaching Creative Media and Entertainment 315, Post-Production Techniques in the fall of 2021. Now teaching the course for the second time, she instructs students to expand upon concepts of videography and editing including the use of full Adobe Suite such as Photoshop, Illustrator and Premiere.

When she is not teaching, she works as the associate producer and graphic designer for Baxter Communications.

Kruska began working full-time immediately out of high school. She worked in computer technology, desktop support and network configuration, but found that she had another passion and decided to pursue a college degree.

As a student at IUPUI, Kruska completed internships, including at the Smithsonian and for WFYI TV 20. She graduated in 2008 with a major in media arts and science.

While attending IUPUI, Kruska said she found herself in a class called New Media, which helped her rediscover an old passion for photography. After re-sparking her interest, Kruska  transferred this passion into layout design and discovered she wanted to pursue desktop publishing.

“I kind of remembered my creative side,” Kruska said. “I said, ‘Yes, this is what I want to do.’”

Ready to embark on a new path, Kruska got the chance to explore her creative side as a summer intern for the Smithsonian in their public services department.

Kruska worked in the photo services department, which at the time was in the basement of the National Museum of American History. Kruska’s responsibilities included scanning and digitally restoring historic negatives, preparing files for research, publication and digital display.

“That was an amazing behind-the-scenes look at a major cultural institution,” Kruska said. “When you get to handle an object or see a photograph that’s been in the archives or in the vault for a long time and you’re like, ‘This is a piece of history. This is really amazing.’”

Kruska said one of the most fascinating sets of photos she worked with were by Addison Scurlock and were published in a book titled “Picturing the Promise that Scurlock Studio and Black Washington” by Donna M. Wells, Lonnie G. Bunch III and David E. Haberstich.

“The book is beautiful, and I cherish the copies I have,” Kruska said. “I take pride in knowing I had even a small part in helping tell the story of an important American photographer.”

In the course she teaches, Kruska hopes she can give her students insight into the field that they’re going into. Rather than introducing her students to a whole new skill set, she wants to help them refine their skills to make their jobs easier in the long run.

Kruska was asked to start teaching by a couple of her friends who work at Butler. They looked at Kruska’s years of experience and matched her with CME 315, since the curriculum is basically a job description of what she does on a daily basis.

“I started thinking of tips and tricks that have helped me in my career … and then tried to build a class around those topics,” Kruska said.

One of Kruska’s students, Brook Tracy, junior journalism and creative media and entertainment double major, said the standout part of having Kruska as a professor is the fact that she has so much real-world experience.

“Teaching something such as post-production techniques is less about following a textbook or having lecture-heavy lessons, and more about giving us insight as to what really happens in the industry and how to be as efficient and effective with our work as possible,” Tracy said.

Kruska said she tries to bring perspective into her teaching in order to show her students how industry in the real world operates. Rather than just being theoretical, Kruska hopes to give her students practical advice based on her experiences.

“It’s a good opportunity for me to step back as a professional and say oh how can I teach someone to do this?” Kruska said. “How can I do that effectively? It’s like ‘Oh thats right, I learned this my rookie year and this has changed since I learned it.’”

Another one of Kruska’s students, Ben Szteinberg, a sophomore creative media and entertainment major, said Kruska is incredibly engaging when she speaks and is clearly passionate about what she does.

“[She talks very] freely and it never feels as if she’s reading off of a script,” Szteinberg said. “It makes the class go by a lot quicker and it allows me to enjoy what I’m learning a little more … the fact that she’s just as interested in it as I am, makes it a lot more enjoyable.”

After changing directions and going back to school, Kruska sees herself fortunate to have had a second chance at finding her passion.

“There are so many pieces and avenues that everyone can find what they like to do,” Kruska said. “[You can] find what you can do day in and day out and feel like you’re contributing … if at the end of the day you love what you do, that’s what really matters.”