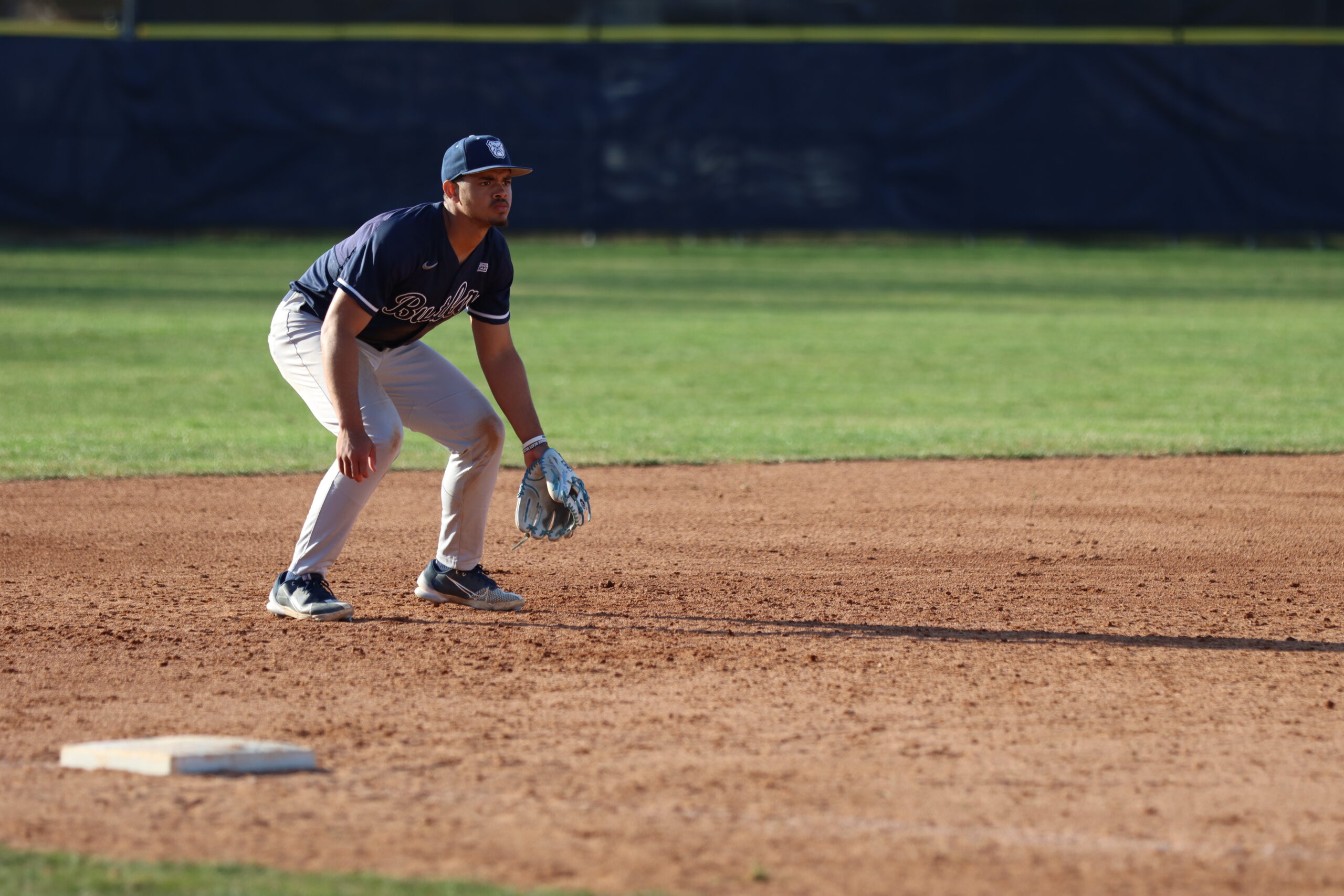 Freshman Jaylon Nauden stands ready in the infield during a game against Eastern Michigan on March 20. Photo courtesy of Butler Athletics.

Butler softball travels to Ohio to take on Dayton on Wednesday. The Bulldogs are 8-2 all-time against the Flyers and won their last meeting by a score of 1-0 back in April 2021. The game is scheduled to begin at 4 p.m.

Butler women’s tennis will play IUPUI at the Butler Bubble at 5 p.m. The Bulldogs are coming off a 4-1 loss to UIC on senior day and are looking to bounce back against the Jaguars.

The Bulldogs will go cross-country to California to compete in the Stanford Invitational on Friday and Saturday. In their last meet, the Raleigh Relays, Barry Keane and Zac Stanley were top 10 finishers in the 10,000 meter run and the long jump, respectively.

The Bulldogs travel to Louisville to face Bellarmine on Friday. The Knights are 5-10 on the season. Matches start at 3 p.m.

The Bulldogs return home for the first of a three-game weekend series against the UConn Huskies. The Dawgs are 6-2 in conference play, while the Huskies boast a 8-1 conference record so far this season. First pitch is at 3 p.m. at the Butler softball fields and the game can be watched on Flosports and Butler+.

The Bulldogs face the Panthers for the first of four games over the weekend at Bulldog Park. Butler is 3-6 all-time against Eastern Illinois, with their last game ending in a 13-6 loss to the Panthers. The Dawgs are most recently coming off a nail-biter against Northwestern that ended in an 11-10 win. The game will begin at 4 p.m. and can be watched on Flosports and Butler+.

The Bulldogs finish up their competitions on the second and final day of the Stanford Invitational on Saturday.

Men’s and women’s track and field at Redbird Invitational

Select members of the track and field team will travel to Normal, Illinois to compete in the Redbird Invitational.

The Butler women’s lacrosse team plays Denver at Varsity Field on Saturday. The Bulldogs will be searching for their first win against the Pioneers in their playing history — Butler is currently 0-5 all-time versus Denver. Butler will be led by junior Campbell Connors, who leads the team in goals and points this season. She most recently guided the Dawgs to a 12-9 win over Youngstown State with a four-goal performance. The game starts at 12 p.m. and can be watched on Flosports and Butler+.

Butler softball will play their second of three weekend games against the UConn Huskies. The game is at the Butler softball fields and starts at 1 p.m.

The Dawgs have a doubleheader on Saturday against the Panthers at Bulldog Park. The first game starts at 12 p.m., followed by a second at 3 p.m. Both games will be streamed on Flosports and Butler+.

Butler softball plays the final game of their weekend series against UConn at 1 p.m. The game will be at the Butler softball fields and can be watched on Flosports and Butler+.

Butler plays their last game against Eastern Illinois on Sunday at Bulldog Park. The game starts at 1 p.m. and will be streamed on Flosports and Butler+.

The Butler women’s golf team will travel to their second-consecutive golf tournament in Kentucky, this time in Richmond for the Eastern Kentucky Invitational. The Bulldogs finished 10th overall in their previous tournament, the Nevel Meade Collegiate. Senior Claire Edwards finished tied for eighth. The invitational will go from Monday, April 4 to Tuesday, April 5.

The Bulldogs will compete in the second and final day of the Eastern Kentucky Invitational.

The Bulldogs play their second game in four days as they take on the Saint Ambrose Fighting Bees at Varsity Field. The NAIA team is 6-2 on the season and is led by junior Audrey Warner. The game starts at 3 p.m. and will be streamed on Flosports and Butler+.

Baseball at No. 12 Notre Dame

The Dawgs will make the two-and-a-half-hour trip north to South Bend to take on the No. 12 ranked Notre Dame Fighting Irish. The Irish are 13-5 on the season but have lost four of their last five games. The game will start at 5 p.m.