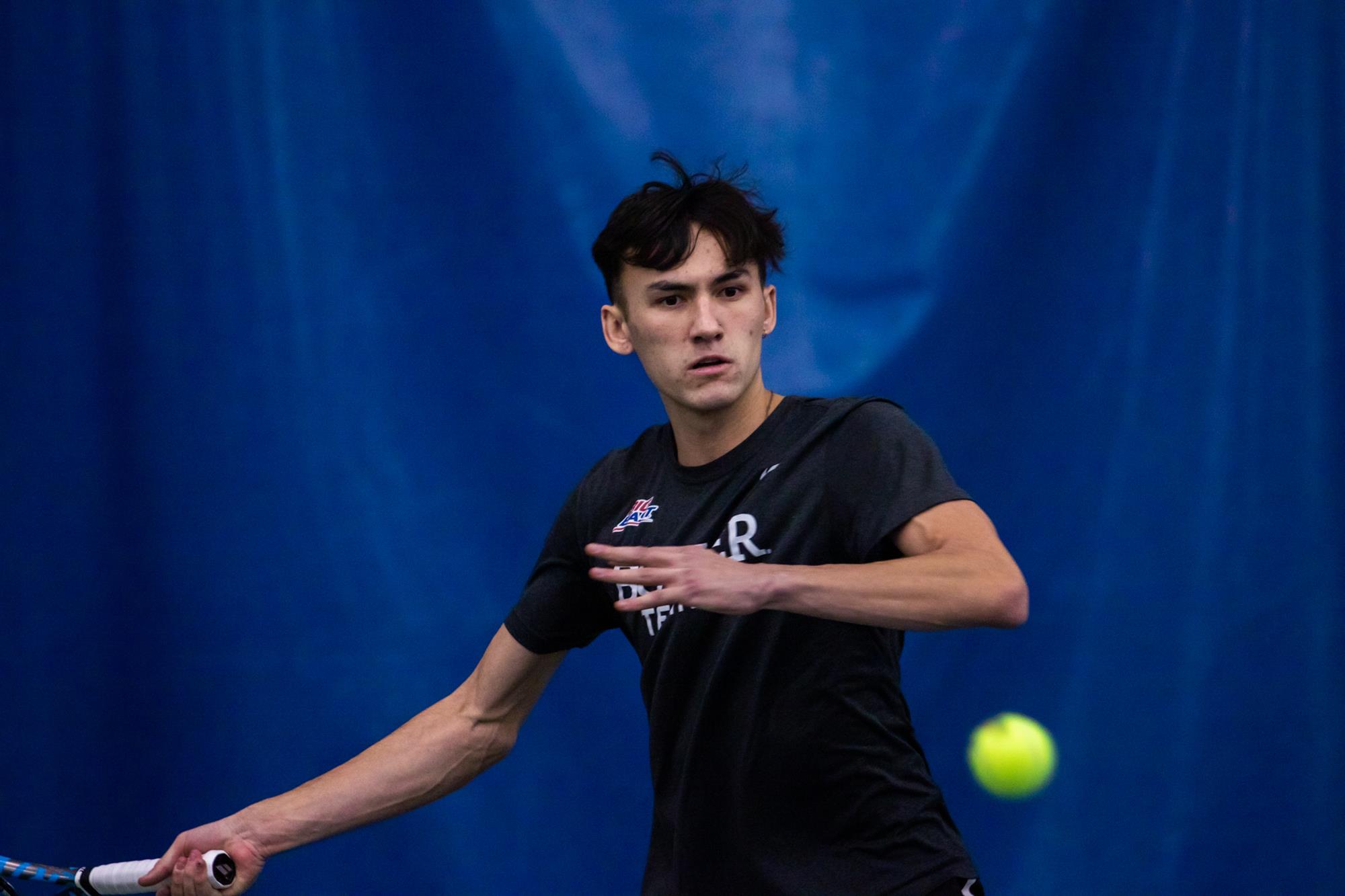 Senior Thomas Brennan during a matchup in the Butler Tennis Bubble earlier this season. The men’s tennis team have been on a three match winning streak since March 13. Photo courtesy of Butler Athletics.

The men’s and women’s track and field teams will head to Raleigh, North Carolina to compete at North Carolina State in the Raleigh Relay on Friday and Saturday. In the Blizzard Buster on March 18, Sophomore Zac Stanley won the 400 meter race with a personal best time of 48.39 and sophomore Drew Herman leaped to victory in the high jump with a jump of 1.95 meters for the men’s team. For the women, Morgan Walsh and Lexi Affolter took the top two spots in the 1500 meter race for their section.

Women’s tennis will take on Western Kentucky in the Butler Bubble at 10 a.m. The team is coming off of a 12-day hiatus following their 4-2 victory over St. Louis on March 13. The program currently sits at 5-11 overall.

Women’s lacrosse will play Cincinnati at home at Varsity Field at 3 p.m. The squad fell just short in their last matchup to Duquesne, 16-19, on March 20. The Bulldogs come into the game at 4-3, while the Bearcats sit below .500 at 4-6.

Softball will play their first matchup in a three-game series against Big East competitor Seton Hall at the Butler softball fields at 3 p.m. The Bulldogs have been hot in the month of March, boasting a 9-2 record and putting them just one spot below first place in the Big East.

Men’s tennis will play Eastern Illinois at home in the Butler Bubble at 3 p.m. The team is currently riding a three-game win streak with victories over St. Louis, Georgetown and Youngstown St. — putting the program at an even 7-7 overall record.

Baseball will play Northwestern at home in Bulldog Park at 4 p.m. The team is coming off a rough weekend where they lost two games in a three-game series against Eastern Michigan. Eastern Michigan outscored the Bulldogs 25-8 in the series.

Butler baseball will play their second game of the weekend against Southern Illinois University Carbondale at home in Bulldog Park at noon. The Salukis come into the matchup with an impressive 15-5 record.

Women’s tennis vs. University of Illinois-Chicago

Women’s tennis will play UIC at home in the Butler Bubble at 10 a.m. The Flames are currently 8-3 overall and are coming into the contest with a four-game win streak.

Women’s lacrosse will play Youngstown State at home at Varsity Field at noon. The Penguins are 5-4 overall and are undefeated in conference play at 3-0.

Baseball will play their second matchup of the weekend against Northwestern at home in Bulldog park at noon.

Men’s golf will participate in the Spring Invitational at Highland Golf Club from March 28-29. Last season, the Bulldogs finished in second place out of 11 teams in the event.

Baseball will play Bellarmine away in Louisville, Kentucky at 2 p.m.The Knights sit in last place in the ASUN conference with a 3-17 record.