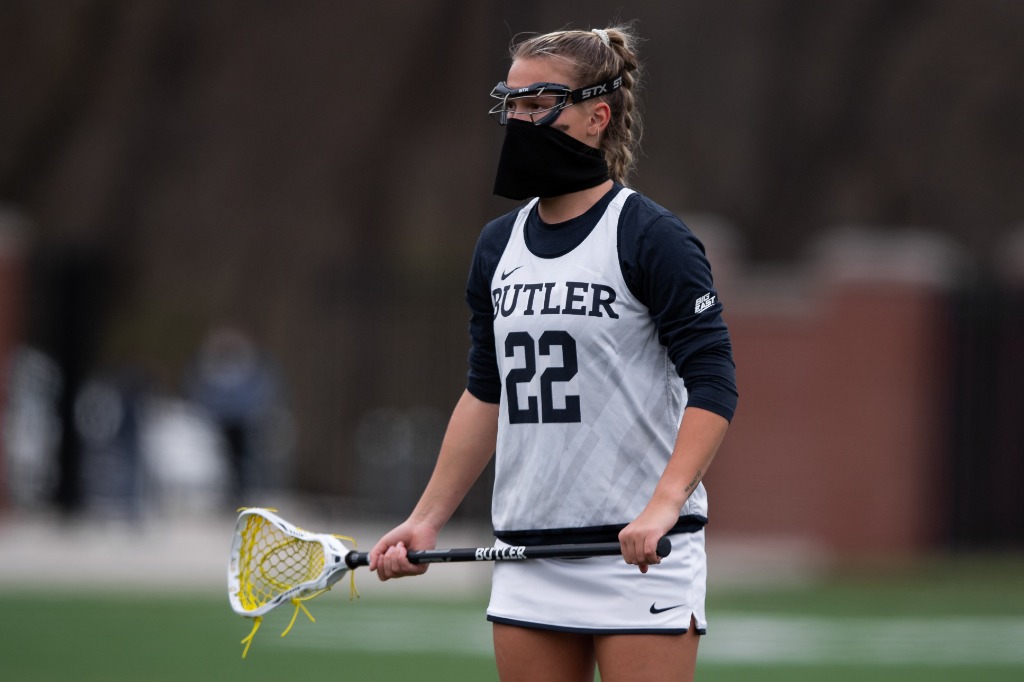 Senior Gabryelle Bodine during a matchup against the University of Connecticut on Apr. 2, 2021. Bodine scored the go ahead goal to give the Bulldogs the victory over Kennesaw State, 12-11. Photo courtesy of Butler Athletics.

After winning their previous game vs Presbyterian 20-4 on March 9, the Bulldogs followed it up with a narrow 12-11 victory against Kennesaw State on March 12.

Midfielder Holly Hall started the scoring for the Bulldogs, tallying the first goal of the game less than two minutes into the first quarter off an assist from Leah Rubino. After a response from Kennesaw State’s Siena Gore, attacker Campbell Connors came back with two consecutive goals, the second of which was assisted by Layla Tattersfield to put Butler ahead 3-1. After Gore’s second goal cut the deficit to one, midfielder Gabryelle Bodine found the back of the net with just 33 seconds left in quarter to give the Dawgs a 4-2 lead after one.

The Dawgs started the second in a similar fashion as the first, with Holly Hall scoring three minutes into the frame. Midfielder Lindsey Schreiber added a goal of her own just over two minutes later. Just twenty seconds after that, Rubino took a pass from Ella Squibb and fired it past the goalie to give Butler a 7-2 lead. The Owls would respond with four unanswered goals – two of them from Gore – to end the first half trailing only 7-6.

Rubino scored her second goal of the game, off another assist from Bireley, two and a half minutes into the fourth quarter to tie the score 10-10. Connors followed up with her fourth tally of the day to give Butler the lead back. After Gore’s ninth goal of the game tied the score 11-11, Bodine would deliver the game winning score with under three minutes left, securing the victory for Butler 12-11.

Gore’s nine goals added to her incredible season total of 38. Goalie Aleigh Monroe made seven saves for the Bulldogs, while Connors scored four goals to raise her season total to 16. Bireley also added two more assists to her team leading total of 12.

The Bulldogs’ next game is on Sunday, March 20 at 12 p.m., where they travel to Pittsburgh to take on Duquesne.