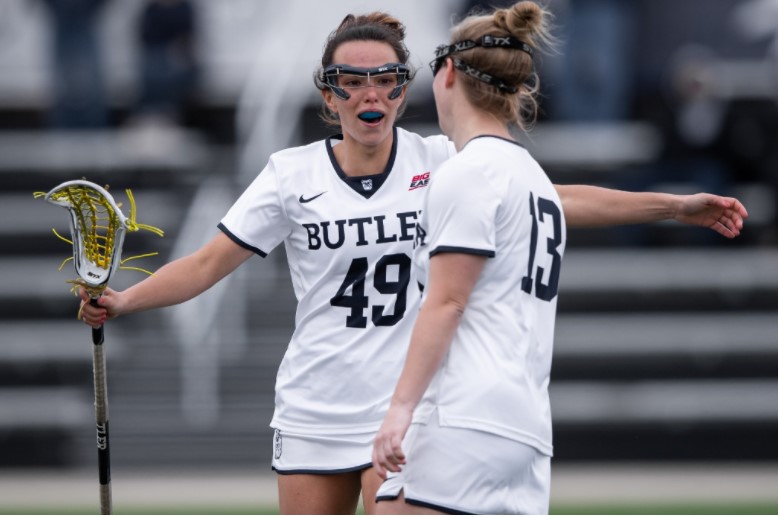 Midfielder Layla Tattersfield and attacker Campbell Connors celebrate after a goal against UConn during the 2021 season. Tattersfield has started all nine games so far this season and Connors leads the team with 27 goals. Photo courtesy of Butler Athletics.

As March comes to an end, the Butler lacrosse team sits at 5-4 and in third place in the Big East standings heading into conference play. The Dawgs will need to maintain their position in the standings in order to achieve their postseason goal of reaching the Big East tournament. Their first test will begin on April 2 at home against last season’s Big East champions, the Denver Pioneers.

The Bulldogs have already exceeded outside expectations as the Big East coaches’ preseason poll picked them to finish last in the conference. At the top of the projected standings is a Denver team that currently sits at 10-1 on the season. The Pioneers are coming off of last season where they finished 10-0 in conference play and secured a bid to the NCAA Tournament.

The Dawgs know the challenges they face in conference play and how they do in these games will determine if they will be able to reach the Big East tournament. Team captain Sarah Dickinson is excited to start conference play and knows the pace will start to pick up along with the level of competition.

“It forces us to play faster along with the other teams,” Dickinson said. “They are much better competition for us and they help us improve our game. When we play these teams, it helps get the most out of our team.”

If the Dawgs can remain ahead of at least two teams, they will make it into the four-team Big East tournament for the first time in program history. Their best chance to date was the 2020 season when they started off 5-2, but the rest of that season was canceled due to the COVID-19 pandemic.

For Butler to win against Denver, they will need to slow down the Denver duo of Bea Behrins and Lauren Black. The two have combined to score 59 goals already this season. Additionally, Denver has had more shots on goal than their opponents in every game except for their one loss against Boston College. For any team to be successful against Denver, you have to limit their shots and their shots on goal. That will have to be the formula of success for the Dawgs.

Another key component will be the Dawgs offense. Denver has allowed the fewest goals in the conference with only 77. Goalkeeper Emelia Bohi has been terrific with 53 saves.

After Denver, the Dawgs next conference opponent will be Georgetown on April 9 at home. The Hoyas are in fourth place with a 5-5 record. Georgetown is led by Ali Diamond and Annabelle Albert, who have a combined 35 goals this season. While those two are the main offensive threats, the team has eight players with double-digit goals and have the most balanced scoring of any Big East team. They were projected to finish third in the coaches poll and will make it tough for any team to pass them in the standings.

The third conference game for the Dawgs will be their first road game of Big East play at Marquette on April 16. Marquette is in fifth place with a 5-6 record and will likely remain within striking distance of the top four teams. The Golden Eagles have balanced scoring, but two names stick out. Shea Garcia leads the team in goals with 28 and Kyra LaMotte is just behind her with 26. The main issue for the Golden Eagles has been their consistency on defense this year. Their offense has been unable to keep up in games where their defense has fallen apart. Their losses against Northwestern and Louisville stand out as they were outscored by a combined total of 20 goals.

Unfortunately, as the conference schedule starts to wind down, the second best team in the conference will await the Dawgs on April 23 in what is sure to be a very difficult road game. UConn finished second in the conference last season and have started off this year with a 8-1 record. Their leading goal scorer, Sydney Watson, has 31 goals on the year and has scored a goal in every game. The Huskies defense has been a strong suit and their stingy style of play makes it tough for teams to score on them. They have allowed the second least amount of goals of any team in the conference with 103 allowed so far and their goalkeeper Landyn White has an astonishing 90 saves.

After the UConn game, the Dawgs will return home on April 30 to end Big East play against Villanova. The Wildcats have an overall record of 4-7 and are currently last in the Big East. Their goal differential is -16 and they have struggled against their non-conference competition. Caroline Curnal is a player to watch, as she leads the Wildcats with 27 goals.

Throughout the first half of the season, the team captains have been setting the tone in the locker room and have been willing the team towards a Big East tournament run. Team captain KK Callaghan explained what making the tournament would mean for Butler lacrosse.

“It would be a huge win for our program,” Callaghan said. “It would put our names in the books and give Butler lacrosse that push that it needs to take the next step.”

While this goal seems very attainable, the Dawgs will need to make some more history in order to get there. Team captain Ellie Eisenklam has been explaining to the team what they can do and really wants to keep the one game at a time mindset.

“It’s one step at a time,” Eisenklam said. “We’ve never even won a Big East game, so that’s step one. Step two is winning two Big East games and that will get us in the tournament.”

This Butler lacrosse team has a chance to make history and cement their legacy. The only thing standing in their way is Big East conference play. Two wins and they are in, otherwise the season will be over and the elusive tournament appearance will have to wait another year.